Developers  may pursue apartments and condos 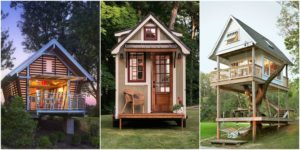 An application to create a gated “tiny house community” adjacent to the Morning Sun subdivision has been withdrawn by the petitioners.


On Wednesday, April 4, Woodland Park City Planning Director Sally Riley received a
request by Quaking Aspens Village to withdraw their application to rezone part of their 13-acre plot of land from a multi-family residential suburban designation to that of a mobile home park.


Residents from the Morning Sun subdivision protested the proposed project vigorously at a community meeting on March 29 at the Ute Pass Cultural Center. Their concerns were mainly the impact the tiny house village would have on their property values. Morning Sun subdivision is an upscale neighborhood consisting of homes, some of which are valued at more than $1 million.


The original plan, if approved by planning and city council, would have allowed 80-101 tiny houses to be installed on 11 acres of the 13-acre plot. The remaining two acres would remain zoned community commercial. During the public meeting, representatives of the project maintained that the people living in these homes would be mostly professional and well-to-do retirees, who wanted to downsize their living quarters. They cited a strong demand for these types of dwellings. Woodland Park also has a much-publicized shortage of affordable housing units.

While the planned tiny house concept has been abandoned, the owners of the property have decided to pursue another route for the land. Since the property is already zoned multi-family residential suburban, except for a two-acre section that is zoned community commercial, the landowners are now going to develop the property within the bounds of the current zoning.


The current zoning will allow the 11 acres zoned multi-family residential suburban to be developed with of up to eight residential units per acre, (88 units). These units can take the form of apartment buildings, condos, townhouses, or individual units. Current zoning will require that any building must be on permanent foundations. Riley said, “We don’t know what they are going to move forward with at this
time.”


The only remaining obstacle to the development is a request to the planning commission by Quaking Aspen Village to realign the two-acre section zoned community commercial. The realignment will shift the two-acre commercial section to Morning Sun Drive and away from Highway 24 where it is located now. This will allow for better access and to take advantage of existing roads. The move will provide safer access to the site.