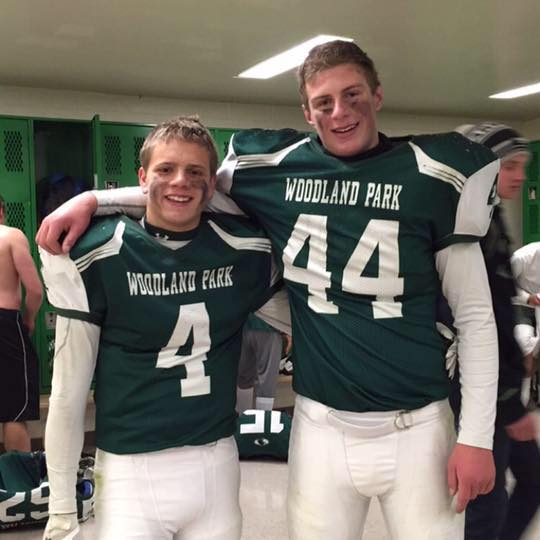 ~ by Trevor Phipps ~
During the Woodland Park High School sports offseason, a few senior players have officially been accepted into universities to play ball on Saturdays next fall.

Currently two of the team’s senior starters have been accepted with scholarships to play college football. Two other players have been given offers that are contingent upon their ACT test scores that the students took last week.

Senior Dominic Roskam has been a starting tailback for the Woodland Park High School varsity football team since his freshman year. For the four years he played as a starter, Roskam was a star player for the team. Last year around mid-season, Roskam suffered a knee injury that put him on the sidelines for the second half of his senior year season.
Since then, doctors have determined that Roskam tore his ACL and he is still going through the recovery process. Earlier in 2018, the star Panther running back was accepted to Western State University in Gunnison and is currently placed on the “preferred” list when it comes to being eligible for sports. If Roskam recovers in time and gets cleared to play by his doctors, then he will be open to try out for the 2018 Western State football team.
During his high school career, Roskam did not spend all of his time out on the gridiron. Through his senior year, Roskam was involved in many student organizations. He has been a choir member, part of a jazz band, a star in school plays, president of the Best Buddies program, a competitor in high school cooking competitions and was awarded the title of the 2017 Homecoming King.
According to his coach and father, Joe Roskam, the star tailback plans to stay focused on his future as he starts his college career. His current focus is to get healthy for the football season so he can further his football career. Aside from sports, Roskam plans to study and major in political science and economics while in college.
Another football star that will be seen on the gridiron playing on Saturdays in the near future is senior tight end Evan Owen. Owen played as a starter on the varsity team as a tight end, but mostly as a defensive end during his sophomore, junior and senior years. According to Coach Roskam, Owen has been an “all-around athlete” during his four years at Woodland Park High School.
Throughout his high school career, Owen has been a captain on the football, baseball and basketball teams. While playing football, Owen was a defensive team captain but was used on the offense as a tight end as well. Earlier this year, Owen was offered a scholarship to Doane University in Nebraska to play on their football team as a tight end. Owen plans to study and major in physical therapy and athletic training.
Roskam told TMJ that he is proud of his boys and wishes them the best in their future careers. “Both of these boys are multi-faceted leaders on and off the football field,” Roskam stated.