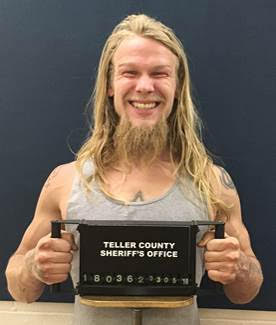 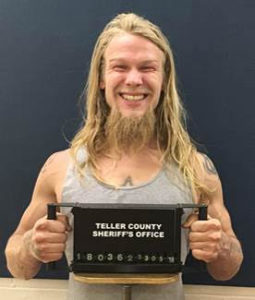 TCSO received information that US Marshals were acting on a lead about Stewart’s possible location within the County.  Stewart was located in the Florissant Heights subdivision living off the grid at a campsite.  Stewart is wanted by Texas authorities for Failure to Register as a Sex Offender (2 counts), and Failure to Comply with Sex Offender Registration Requirements.  He is listed as one of Texas’ 10 most wanted sex offender fugitives and was classified as armed and dangerous.  There was a $5000.00 reward posted online:

Dakota Marcus STEWART, a high-risk sex offender, was added to the Texas 10 Most Wanted Sex Offender list in October 2017. Working off investigative information, the U.S. Marshals Violent Offender Task Force – District of Colorado apprehended STEWART on March 6, 2018, in Florissant, Colorado, located west of Colorado Springs in Teller County. The investigation that resulted in STEWART’s arrest was a multi-agency effort that also included members of the U.S. Marshals North Texas Fugitive Task Force. In 2009, STEWART was convicted of Aggravated Sexual of a Child and Indecency with a Child by Exposure after incidents in Tarrant County involving two young girls. STEWART had been wanted since August 2017 for Failure to Register as a Sex Offender (Mansfield PD) and for Failure to Comply with Sex Offender Registration Requirements (Dallas County).The arrest was not the result of tip information received through Texas Crime Stoppers, so no reward will be paid.

Stewart is being charged with the following new felony crimes: Attempting to Influence a Public Servant, Criminal Impersonation, and Failure to Register as a Sex Offender in Colorado.  He is being held without bond until a hearing in front of a judge.

TCSO is committed to working with our law enforcement partners to make our community safe.

This release was released in cooperation with: