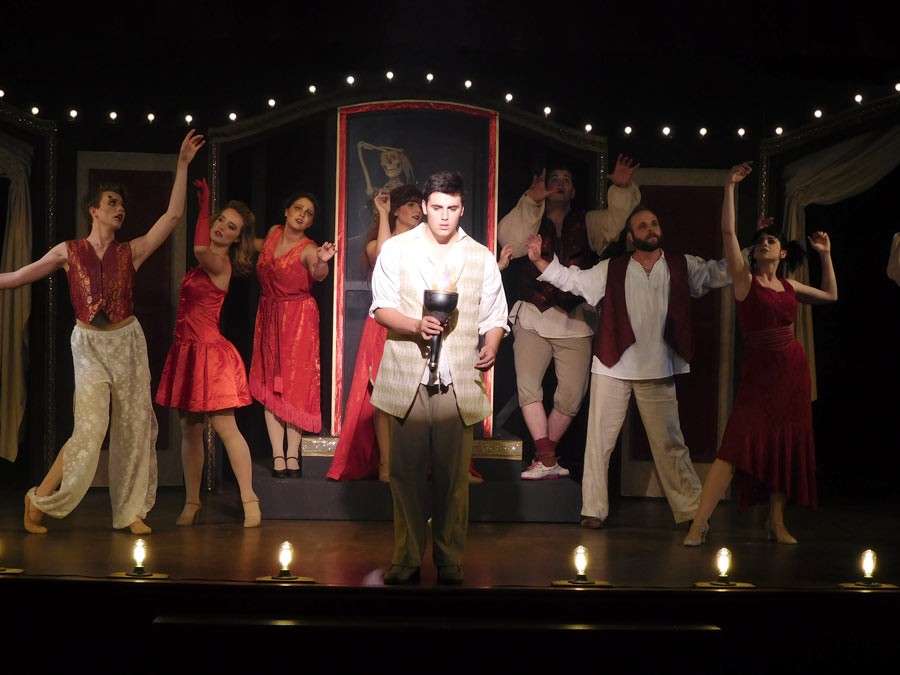 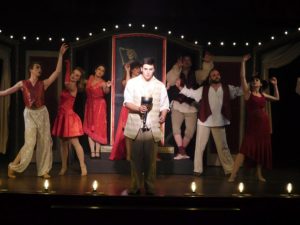 ~ by Rick Langenberg ~
This year will mark the 70th year reunion of classic melodrama in Cripple Creek, and the Butte Theater and the new Mountain Repertory Theatre (MRT) company plan to showcase this historic occasion in grand theatrical style.
That’s according to the city’s theater manager Mel Moser, who briefed the city council last Wednesday evening on changes that will occur at the Butte this year. He outlined a strong community-oriented push that will occur with a more active Butte Theater board of directors, and with a new theater company. MRT takes over after ties were severed at the end of 2017 with the Thin Air Theatre Company, which had put on shows at the Butte for 11 years.
“We have more boots on the ground,” said Moser, in explaining the new theatrical direction in Cripple Creek. “We are doing a lot of community things. We are more community-driven.”
He cited the new board as much more aggressive about pursuing grants and marketing, along with having a stronger social media presence. He said MRT and Butte representatives will make regular appearances at local events.
In addition, the Butte will experience substantial improvements with its sound and electrical system and with other staging effects, according to the theater director.
Moser, who was once part of the Thin Air Theatre Company, admitted the transition has been tough for some locals to accept. “It was a tough decision for me,” said Moser, who is part of the Butte Theater Board.
Moser is regarded as the predominant face of theater in Cripple Creek. As part of their new focus, MRT will do a variety of musical theatrical shows and will continue to emphasize the classic melodrama genre. Their scheduled shows for this year include The Mystery of Irma Vep, Hot Night in the Old Town, Forever Plaid,, The Marvelous Wonderettes, Always…Patsy Cline, Rocky Horror Picture Show and a Mountain Holiday.
Classic Melodrama Party
But catching the council’s attention the most last week was the description of a melodrama reunion party later this year, featuring past performers and cast members over the last seven decades.
Seventy years ago, Wayne and Dorothy Mackin put Cripple Creek on the theatrical and tourist map with their melodrama performances at the old Imperial Hotel that captured national attention. That trend was then continued with the beginning of the Butte, under the reign of Steve Mackin (the son of Wayne and Dorothy Mackin) and Bonnie Mackin (Steve’s wife). Melodrama shows of a slightly different flavor were then done by Thin Air Theatre Company, following the exit of Steve and Bonnie Mackin from the Butte Theater’s management reign.
Moser said more details would unveil regarding this reunion celebration.  He said Bonnie Mackin has an incredible historic reserve of information about the history of melodrama in Cripple Creek. She still lives in the Pikes Peak region.
Prior to gambling, the town’s melodrama performances played a key role in putting Cripple Creek on the tourist map. A number of Imperial actors even went onto national prominence. Walt Disney even attended the old melodrama shows, according to records.
Steve Mackin passed away nearly five years ago, but he was regarded as a local legend. He was the original chairman of the historic preservation commission.
Moser stressed that classic melodrama performances will continue at the Butte and become an important part of the theater’s tradition. That’s important, as a good portion of historic preservation funds go towards subsidizing theater at the Butte.
Moser assured the council that the Butte and MRT will take painstaking effort to preserve this genre of theater.  In a recent audit, state officials questioned the use of historic preservation monies going towards the Butte, but didn’t recommend any specific actions. Under new rules, the state is reviewing how historic preservation monies are allocated in the three gambling towns.
Cripple Creek officials, though, have maintained that classic melodrama is a critical aspect of the district’s history.