What do Cripple Creek gaming pioneers and the veteran rock pop icons Fleetwood Mac have in common?

An ongoing love affair with rumors.

Fleetwood’s  rise to fame was sparked by “Rumours,” the album that put Mick Fleetwood, Stevie Nicks and the whole 70s musical wonder gang on the map to stardom. Fleetwood’s version of Rumours dealt with some wild soap opera tales and internal romances that took on a life of their own. Enough said on that episode.

Ironically, wild rumors also are what spearheaded the Cripple Creek gambling movement nearly 30 years ago.  In fact, we might have played a role in that department, so blame TMJ if you don’t like what has happened to the old Cripple Creek.   What started as a desperate search for news one day by a Colorado Springs television station regarding the so-called rumor-like prospects of limited stakes gaming, Deadwood, South Dakota style elevated to the thought:  Why the Hell not for Cripple Creek? 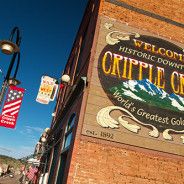 Oddly enough, that rumor gained traction in our paper and many other media outlets.  As a result, whether they wanted to pursue this idea or not, Creek leaders had to wrestle with the possibility and even had miniature unofficial local votes. At the time, Cripple Creek didn’t have anything to lose and was clearly dying. Their once bustling summer tourism economy was getting ravished by the big resorts like Breckenridge and Vail, who started pursuing summer festivals and events like never before. Plus, the late 1980s recession that hit Colorado further added to the Creek’s woes.

Then came an awkward partnership with Central City, a town that all the experts figured would capture the future gambling limelight. Yes, that prediction was clearly off. But that partnership gave the gambling proponents a fighting chance.

Then came frequent visits to Deadwood, South Dakota by local leaders and journalists and an extremely aggressive campaign. In the end, Colorado voters thought if Cripple Creek and Teller County wanted to resurrect their economy through this new industry, than let them go for it. The vote passed by a 55 percent-plus margin, not a bad victory considering that in initial polls several months prior to the election, the gaming folks faced an uphill fight. But following the vote, the real work and fun began.

As we soon celebrate the 26th anniversary of gaming, here are a few highlights and low points of this amazing story.

Let the Free Enterprise Reign.  During the initial years of gaming, frequent fights erupted over who should become the winners and losers of Lady Luck, once voters gave the okay.  Cripple Creek council meetings regularly attracted more than 100 people, about a third of whom were lawyers and consultants.  After-council meetings were conducted at the then Red Lantern Inn, and there were some wild times and foggy memories by this writer.  Some favored letting the retail shop owners who campaigned hard for the new gambling amendment benefit, instead of new developers.  In addition, some original campaign organizers wanted to restrict how many slot devices a building could house, or where gaming should be allowed. Meetings got testy and even a subsequent vote occurred.

In the end, the free enterprisers won big, which opened up the gaming district in an unrestricted style. But as they say in business, it is about location, location and location. So in the end, the free enterprisers really didn’t get to wave a real victory flag after all. By the first summer of gaming, a town that started with a mere handful of casinos on Oct. 1, 1991, busted with close to 35 gaming establishments. Then came the shake-out, with TMJ compiling casino obituaries on a weekly basis. One fact remained certain: Gaming could only thrive in the main part of the downtown.

Wave That American Flag. Whether it was patriotism or attention, one of the more bizarre post-gaming controversies focused around an American flag pole display by a casino that once was known as the Jubilee, more recently known as the old Wild Horse. A pursuit of a 200-foot-tall American flagpole display was suddenly aborted by then historic preservation director Brian Levine, who guarded the rules with an iron fist.  The Minnesota casino owners, in an unusual sense of humor, fought back by painting the flagpole pink in the middle of the night.  Then, they draped their entire casino with the American flag for weeks, while the case headed to the courts. These antics occurred following a local meeting that came close to ending in a fist fight, with the historic preservation director getting wrestled to the ground by his own commission members.  No, I am not exaggerating.  That was a pretty common place occurrence around that time.

This capped a bizarre trend of wild times at historic preservation meetings, in which it wasn’t uncommon to have three police officers attending these sessions. At times, they were ready to recruit journalists to take on trouble-makers. Over the last several decades, the town has toiled over demolition requests, parking lot structures and more, but officials have taken a more common sense approach.

A Town of Characters.  Cripple Creek’s pre and post-gaming era has gained quite an allure for its funny and personable characters.  People like Brian Levine, Kathy Conley, Bobby C, Bob Jeffries, Kip Petersen, Doug Shane, Terry Wahrer, Bill Robinson, Harold Hern, Wild Wild West Nick, John Bowman, June Hack, Steve Mackin, James Krajeck, Larry Manning, Maurice Woods, Museum “Red Dress” Jan and many more gave the town a definite personality. Even if many of these people couldn’t stand to be in the same room with each other, they gave the town character.  Unfortunately, the loss of unique characters and old-timers in the Creek is one unfortunate aftermath of gaming. I am hedging my bets, though, that this trend will return with a slightly different council makeup this November.

The Big Will Dominate the Small.  Probably the most negative effect of the evolving gaming story deals with the death of the small guys, such as Mom and Pop casinos and retail shops. Casinos like the old Black Diamond and the Wild, Wild West were great social centers. The consolidation of casino properties is one trend that started emerged from the first summer of action. It is one reason that the town found its gaming lineup dwarfed from nearly 35 places to 12.

Festival Explosion and Marketing Wars. Nope, Cripple Creek will never rival the likes of Telluride and Breckenridge in the special event arena.  But Creek gaming has given the Pikes Peak region a run for its money for special events, live theater and more. Probably no venue can beat the Butte Theater, a development that has given Springs theater proponents a well needed kick in the pants. At the same time, the post-gaming era has made everyone a marketing expert.

Regardless of the many arguments regarding the best way to promote Cripple Creek, the town is a happening place in the summer, with events that many families enjoy, with such highlights as the veterans rally, Donkey Derby Days, July 4th Celebration, Cruise Above the Clouds and the fall festival. This pro-tourism trend could get even more interesting with the town’s growing bid as a recreation hub, with an adventure park and a pro-ATV atmosphere.

Smoking Ban Battle. Probably no town in the Pikes Peak region put up such a staunch defense against imposing the smoking ban, a state law that still causes stinging impacts. I must give credit to both Bronco Billy’s and Triple Crown in their valiant effort to confront the state nearly 10 years ago with various legal plays. During a court hearing before a district court judge regarding a proposed cigar bar by Triple Crown, I really thought  the casino operators should have won. Their arguments were much more solid than the anti-smoking attorneys. But unfortunately, the judge opted to play it politically and legally safe and not to disturb the prevailing anti-smoking fervor that dominated the state capitol at the time.  As a result, all smoking was banned in casino and bar areas.

The Gambling Surge. When Cripple Creek started on their betting journey in 1991, the town became one of the few historic towns in the country to sport legal gaming. But over the last 26 years, gaming is now predominant in most states and in numerous cities. The novelty is gone, forcing Creek leaders and casino operators to make the experience worthwhile and emphasize customer service, customer service and customer service. But luckily for the Creek, Black Hawk and Central City, no close gaming rivals have emerged, with gambling plans proposed for Manitou Springs, Pueblo and Trinidad falling well short of the finish line.

Fighting the Dark Empire. Recent years have found Cripple Creek  and Teller County fighting the Dark Gambling Empire, the repulsive gaming town of Black Hawk.  How Black Hawk has avoided state action for breaking virtually every historic preservation standard established under the Sun is another story. Don’t look for any peace truces here. In fact, if you mention the words Black Hawk to county and city officials, you better prepare yourself for a mini-speech. But with this feud, what fact remains certain: Cripple Creek is the most fun place to gamble and hang out in the state. If you spend time in both Cripple Creek and Black Hawk, you will learn real quick that Cripple Creek resembles the idea behind limited stakes gaming that the original amendment pioneers had in mind.

Let’s have another great 26 years of gaming.