Protests Thrown Out Due to Technical Deficiencies 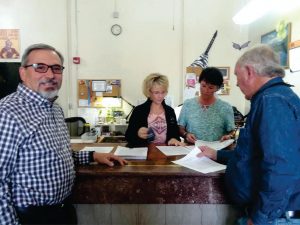 Pending any last-minute hurdles, three incumbents and well-known school board leaders of the Cripple Creek/Victor Re-1 District will face a recall election this summer.

Last week, Teller County Attorney Paul Hurcomb, acting as the official hearing officer, in a surprise legal bombshell, dismissed the lengthy protest filings of veteran board members Tim Braun, Dennis Jones and Tonya Martin due to technicalities. In fact, the protests weren’t even heard due to the board members’ failure to abide by a requirement to have their protests done in writing “under oath.” This rule, along with the stated deadline for filing a protest, were the main requirements the targeted board members had to follow in protesting a successful petition campaign calling for their ouster.

The three board members succeeded in meeting the time deadline, but according to Hurcomb, their protest was invalid because it wasn’t done “under oath.” This requirement is listed in the state rules regarding recall petitions.

His decision abruptly ended a protest hearing that had the appearance of one that would last for several hours and involve heated rhetoric from both sides. Braun and Jones combined presented documents that nearly encompassed 100 pages. Patricia Waddle, one of the main leaders of the recall group, came equipped with reams of documents that nearly required another person to carry into the commissioners’ meeting room.

Tensions between the two sides were extremely tense, as hardly a word was spoken. For the most part, members of both camps sat in opposite sides of the hearing room.

With Hurcomb’s decision, the stage is set for an election within the next two months. As of TMJ’s press deadline, an exact date for the election hadn’t been set.

“It is not over,” blasted Braun, following the decision, in a hint that court action would occur.

But in an official statement filed late last week, Braun and Jones expressed extreme disappointment with the verdict, but indicated they won’t be filing an appeal in District Court. Instead, they vowed to embark on an aggressive campaign to keep their election posts.

“Unfortunately, we were unable to present our protest before the county clerk and recorder due to the hearing officer’s finding that the protest didn’t have an oath statement,” said the group of targeted board members in a prepared statement. “We disagree with the hearing officer’s interpretation as there is no clear definition of whether the oath was to be in the form of notarization, or if the clerk should have administered the oath when presented. The decision has been rendered and the electors will have to be presented the evidence which will show the petition violated state statues by stating grounds that were false and misleading to those who signed the petition. We could appeal to the District Court, but decided our time and money would  be better spent providing the actual documented facts to the electors.”

Moreover, the targeted  members have vowed to conduct an aggressive campaign and say they clearly stand on their record as district board members.

In setting the stage for the hearing last week, Hurcomb, in an extremely detailed manner, went through the documents compiled by Braun and Jones and ones done on behalf of Martin, who didn’t appear at last week’s hearing. Based on his analysis, he described five protests filed altogether.

“I found it to be invalid,” said Hurcomb, in describing the deficiencies of the protests.

Both Braun and Jones appeared stunned at Hurcomb’s decision. Hurcomb said it was insufficient because it failed to abide by a  key section of the Colorado law that states, “A recall petition that has been verified by the designated election official shall be held to be sufficient unless a protest in writing under oath is filed” (in time).

Braun immediately addressed Hurcomb and reiterated that when they filed their protest before the clerk, they assumed that requirement was being met.

But Hurcomb’s interpretation was no. According to the county attorney, the protesters had the right to file an appeal, but such action would not interfere with the projected date for the recall election.  The time of the election must occur not less than 30 days or more than 60 days from the date an  official decision is rendered by the hearing officer. This written decision was finalized on May 10.

The legal verdict has further confused a recall saga that is already turning into a lengthy political soap opera that has been brewing for the last five years. The recall group has accused the veteran school board members of a slew of violations, including violating open meeting and record laws, school board policies and state and local statutes and misappropriating funds.

Prior to Hurcomb’s decision, the recall members were prepared to unveil major allegations of misstatements by the school board ouster group. But it is still not clear how much of this would have been addressed by the hearing officer.

According to clerk and recorder officials, a protest of a recall can only address such issues as the authenticity of the petition signatures, the wording length of the recall petition and whether the circulators met the proper guidelines.

Braun, though, slightly disagreed with this interpretation. He cited a provision in the state law that stipulates “Grounds (for a protest) include failure of any portion of a petition or circulator affidavit to meet the requirements of this article or any conduct on the part of the petition circulators that substantially misleads persons signing the petition.” ‘Braun and Jones, in their protests, have argued that the petitioners violated this provision through “reckless statements” and other related misinformation they presented, based on the recall petitions themselves and their campaign material.

Colorado, though, is a tough state for a judge to rule in favor of recall-related protests aimed at stopping an election, especially if the proper amount of signatures are verified.  An out-of-town judge once told Cripple Creek leaders that an elected official in Colorado can be recalled for the color of their hair.

In any case, the stage is now set for a significant election this summer that could determine the fate of the district. The targeted members clearly stand on their record. In the statements they provide the press, the targeted members classify the recall effort as a “campaign to disrupt the positive environment the school board has achieved and is continuing to achieve through curriculum development, technology improvements and educational enhancements. We believe the intent of the recall group is to replace all administrative staff and eliminate safety procedures.”

The recall group, which classifies their campaign as “Erase the Board,” has maintained that the current board has operated in a secret and illegal manner. They contend the time for change is right now.