Well, the bye is passed and Vance Joseph is still the Denver Broncos’ coach.

Next Sunday the 3-6 Broncs travel to LA to play the red hot 7-2 Chargers. The Chargers have drafted well the past few years and its really starting to pay dividends. The Chargers are talented on both
sides of the ball and feature one of the fiercest edge rushing duos in the league in Joey Bosa and Melvin Ingram.

Denver split with the Chargers last year, but it was thanks to a blocked field goal in Week 1 by Shelby Harris that the Broncos didn’t go 0-2. L.A. shut Denver out in their Week 7 meeting. 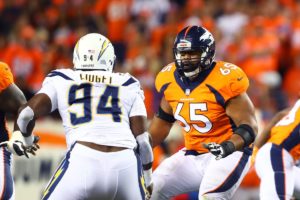 This year the Chargers are on a tear. They are averaging 27 points a game, but their strength in scoring is their ability to come from behind to win. Coming from behind to win is something the Broncos have
fallen short of this year.

The good news for the Broncos is the Chargers haven’t had a very hard schedule. They beat the Raiders twice, the Browns, the Bills, Forty-Niners, the Seahawks, and barely got passed the so-so Titans by
one point.

The Chargers defense is ranked 12th in the league allowing only 13 points per game. In the past, edge rushers Bosa and Ingram have raised havoc in opposing backfields, but that isn’t what the Broncos need to worry about. The Charger secondary is strong and relentless. Charger cornerback Desmond King returned a Russell Wilson pass for a TD against the Seahawks in week 8. The Charger’s secondary now has 10 INT’s on the season. This could be a problem for the pick prone Keenum.

The Chargers are ranked 15th running the rock. Melvin Gordon is the main threat in the Charger running attack. He has over 7 rushing TD’s this year and is 17th in the league rushing. He’s averaging 7 yards
per carry.

On defense against the run, the Chargers are on a slide. They’ve been allowing an average 112 yards rushing, but in the last three games they’ve given up an average of 140 yards per game. With Royce Freeman likely to be back and rookie of the year contender, Phillip Lindsey just catching his stride, the Chargers are going to have to stuff the box to stop the run. This may give Sanders and Sutton a good chance to get loose deep in the passing game.

The Bronco pass rush is getting better with every game. Phillip Rivers is a master at getting rid of the ball quickly, but he’s going to have his hands full of Von Miller and Bradley Chubb next week. The Broncos
have a combined 24 sacks this season and have forced 7 fumbles.

When you get right down to the numbers, the Chargers aren’t the team they think they are. The only thing that keeps them going is the strength of schedule they’ve played this year. Every division game,
regardless of team, is a dogfight. Next week the Chargers face a desperate Bronco team.

The defense is hitting on all cylinders now and Broncos QB Case Keenum hasn’t recently thrown the ball to the wrong team. With Demaryius Thomas gone, Cortland Sutton is now the number two receiver
and Sanders is catching most everything thrown his way. Against the Texans, the Broncos converted 3 fourth down plays, and nearly pulled a rabbit out of their hats for the win.
Look for a fight to the finish.