Stay Clear of The Dark Side Crazies

~ by Bob Volpe ~
We don’t know much about the Oakland Raiders this season, especially since they played the Rams on Monday Night Football (past the deadline for this issue. All we can do is guess at what has happened to the Raiders this off-season and pre-season.)

In any case, the forthcoming rivalry this weekend will ignite some sparks, as the Broncos and Raiders don’t like each other

The Raiders have gone through some drastic changes. Jon Gruden,  a former television analyst, is now head coach, replacing Jack Del Rio. The change has yet to show positive outcomes.

Gruden has not endeared himself to the team. He traded the elite pass rusher Kahlil Mack to the Bears, released receiver Michael Crabtree, and their start punter Marquette King is now a Bronco. 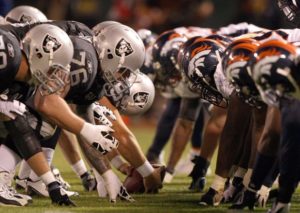 The Raiders did sign Jordy Nelson, from the Packers in the off-season. He’ll give Derek Carr an additional target, especially on third down.

Their other addition at wide receiver this year, Martavis Bryant is facing a yearlong suspension for violating the league’s substance abuse policy.

Marshawn Lynch is still with the team at running back and the Raiders brought in former Buc, Dough Martin to carry the rock.

The Raiders were weak enough on defense, even with the late Kahlil Mack. Their secondary is still a massive weakness.

In the pre-season, the Raiders went 3-1. Falling to the Rams and beating Seattle, Lions, and Packers. But hey, that was preseason.

As for the Broncos, their opener against the Seahawks was an up and down affair. The defense played lights out. Von Miller was uncaged.

Unfortunately, quarterback Case Keenum threw three interceptions against the Hawks. It’s not often a team can toss three INT’s and still pull off a win, which is a huge testimony to the defense. Keenum cant’ take all the fault for the interceptions. It was clear some of the routes were just run wrong on two of them. He still managed a respectable three touchdown passes and threw for 329 yards on 39 attempts. It will take a little time for the offense to gel and get everybody on the same page.

Both rookie running backs were outstanding. Oddly enough, both Royce
Freemand and Phillip Lindsey rushed for 71 yards on 15 carries. Weird,
but good.

Special teams played well, and are a big improvement over last year.

Now that the Broncos got the stink of last year’s lousy record out of their jerseys, and played under duress for the win, they start the season with confidence.

This one is a tough call since we know so little about this year’s Raiders and it is a division game, which is always a tough row to hoe,

But the Broncs are going to win this one and go 2-0 on the season.

Broncos will win 27-14. Enjoy the game in one of our many illustrious Bronco-viewing hangouts