Representatives of the National Grocers chain encountered plenty of skeptics last week regarding their bid for one of the more lucrative tax deals offered by the Downtown Development Authority as a prime condition for locating a store in Woodland Park.

Following a lively discussion, the DDA board agreed to review the issue in more detail and make a decision shortly. The issue was scheduled for action on Wednesday morning, with an executive session scheduled at the Historic Ute Inn.

No one is objecting to the store plans for locating a 13,000-square-foot outlet in downtown Woodland Park in a prime location at the corner of Hwy. 24 and Paradise Lodge Rd. These plans have already been approved by city officials.

But the idea of giving National Grocers a more lucrative deal than other prospective businesses raised a many question marks. “Is this a wise business decision,” questioned DDA board member Elijah Murphy, who estimated the deal at the $4 million-plus range.

National Grocers wants to receive a tax increment financing (TIF) deal that gives them 80 percent of tax refunds for a period of 20 years on real property taxes (land and improvements) and 100 percent over 20 years on the increased property taxes. This is a much more lucrative incentive arrangement that the deals offered for most current and future businesses, locating in the DDA district. They typically receive 75 percent tax relief for the first five years, 50 percent for the second five years, 20 percent for the next five, and then zilch after the 15-year-term. The DDA is the only official entity in Woodland Park that can offer business-type incentives for locating downtown.

Moreover, a spokesman for the Leadership Circle LLC, the representatives for National Grocers, has indicated that without their preferred incentive deal, they don’t plan to come to Woodland Park, period. However, at last week’s DDA meeting, Leadership Circle representatives retreated slightly from that position, and expressed an interest in seeing what the DDA could offer. One area they agreed to compromise is in the 20-year proposed incentive period because the DDA may not legally be able to offer that long of a tax-free perk by law.

“This is a very contentious issue,” said Councilman Noel Sawyer, when addressing the National Grocers’ representatives. 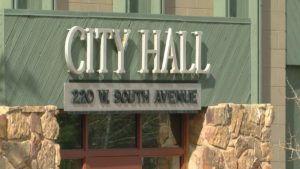 But Matt Miles, of the Leadership Circle group, maintained that chains like National Grocers operate on a razor-thin profit margin and rely on incentive packages from prospective communities to make their decisions. He reiterated that the DDA’s decision regarding their proposed incentive package would determine whether National Grocers operates in Woodland Park. “We want to stop the leakage (coming) down the valley,” said Miles. “We want to come here.”

A great market for National Grocers

DDA Treasurer Tanner Coy, though, questioned this dire business account. In reviewing the company’s financial documents, he questioned if they really needed a TIF agreement. In fact, Coy, the president of Tweeds Fine Furnishings, cited the Woodland Park as a prime market for National Grocers, regardless of whether any incentives deal was made. Instead of a TIF agreement, he argued in favor of a PIF (public improvement fee), which could be worked out between the DDA and National Grocers. This isn’t a tax, but is a private fee collected by the store on sales transactions for prospective improvements, with the help of another entity.

However, Miles and other National Grocers representatives gave that plan a firm veto. “It is a disincentive,” said the National Grocers developer, in describing this type of fee arrangement. They made it clear they needed a fairly big tax rebate package in order to locate in Woodland Park.

But their plan was criticized by a few citizens, DDA members and representatives of emergency service organizations. “They are not exempt from the services we provide,” blasted Tim Dienst, the chief executive offer of the Ute Pass Regional Health Service District, commonly known as Woodland Park Ambulance. “We have to fulfill our promises to the taxpayers. We have to be cognizant of where our money is coming from.”

He asked the DDA to consider the impacts of such a hefty tax incentive deal for local emergency medical services. In the past, these groups have opposed TIF agreements because they don’t receive much of the extra money generated from these new businesses or expansions.

Murphy also questioned the real value of doing a deal with National Grocers, noting that the chain mainly serves a high-end market.

But Miles staunchly denied these charges, suggesting that shoppers compare their bill at a National Grocers outlet to that of a Safeway or City Market.

Resident David Perkins, meanwhile, reminded the DDA that neither Safeway nor any of the big grocery chains in Woodland Park were given incentive packages of this magnitude. He maintained the importance of “competing on a level playing field.”

DDA Chairperson Merry Jo Larsen thanked the National Grocers representatives for attending the board’s monthly meeting. She admitted the board faced a tough decision and had to review the company’s financial information and proposed incentive package in lieu of the DDA’s current and future situation. The group did provide the board with estimates of their projected taxes, if they come to Woodland Park.

In other action, Jane Mannon, special projects director for the city of Woodland Park, presented a strategic main street proposal for a downtown parking plan, and possibly reviewing the current allotment of parking availability with the help of consultants. But the idea of getting additional funding dollars from the DDA didn’t receive a warm response.

Plus, several DDA representatives noted that plans like this were done in the past, with a close examination of the town’s parking resources. The board agreed to review this plan at a later date, but maintained it didn’t have any funds now to support the effort.