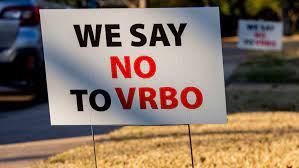 In fact, the meeting was filled with business items and presentations including the Woodland Park High School Cheerleading team getting honored by the city for winning the state 3A championship.

However, during public comment, the session was bombarded again by the barrage of opinions regarding the several-month short- term rental debacle. People stood in front of the council and spoke on both sides of the heated STR issue.

But due to the fact that no official STR items were listed, no action was taken.

City Clerk Suzanne Leclercq gave an update on the status of the two referendums that are currently in the process. She reported not quite finishing the process of verifying signatures for the referendum petition against Ordinance 1431, which would repeal the council’s new STR licensing system. She believes that it will be finalized sometime this week.

Leclercq also said that the referendum petition to repeal the STR moratorium (Ordinance 1432) did not make it to the next step. She said no petitions were turned in with signatures, before the designated 30- day deadline.

During the city manager’s report, Leclercq explained the strenuous process of verifying all 906 signatures that were turned in to repeal Ordinance 1431. “It’s a very tedious process,” said the city clerk. “We have taken all 906 names and put them into a spreadsheet. So that was the first thing the data entry of putting every name and address into the spreadsheet. The second part is that we look at my voter list that we had from the last election and see if they are a voter.”

Then, officials look through the list and make sure that each person who signed the petition lives inside the city limits.

She said that her team plans to have an answer as to whether or not there were enough (714) signatures on the petition by early this week.

Leclercq said that the group of petitioners would be the first ones to find out whether the referendum process can go to the next step. Then, officials will notify the rest of the public.

The city clerk explained that since the petition was submitted on Dec. 27, the clerk’s office has until Jan. 27 to verify the signatures. The protest period will then last for 10 days, following the initial Jan. 27 deadline.

“When we complete all of that we will then be bringing it to council if the petition is successful,” the city clerk stated. “The goal of the city is to bring it to council during the meeting on February 16. That is when the protest period will be over. It will be on the agenda and council will then have the decision before them if the petition is successful, to repeal the ordinance or send it to election.”

Residents Bring Up Their Arguments For and Against STR Regulations

Resident Jeremy Lyons told the council that he can see both sides because he owns an STR rental house and he lives close to another one. “I think some of you (the residents who signed the petition to repeal the STR ordinance) have been victims of fear mongering,” Lyons said. “This story of an out of town corporate investor that’s buying up three or four houses around your property, I would like to know the name of that guy. Because it is a made up story.”

Resident Arnie Sparnins, who helped lead the petition effort, and urged the council to listen to the citizens and repeal the STR ordinance. “Throughout this process, the consistent message by residents about dedicated lodging businesses not belonging in residential districts was drowned out by an organized group of STR advocates,” Sparnins said. “Now, rather than just hearing from a close circle of real estate investors, these are your actual neighbors who are speaking out by supporting the referendum petition. That is the true benefit of reaching out door to door and neighbor to neighbor.”