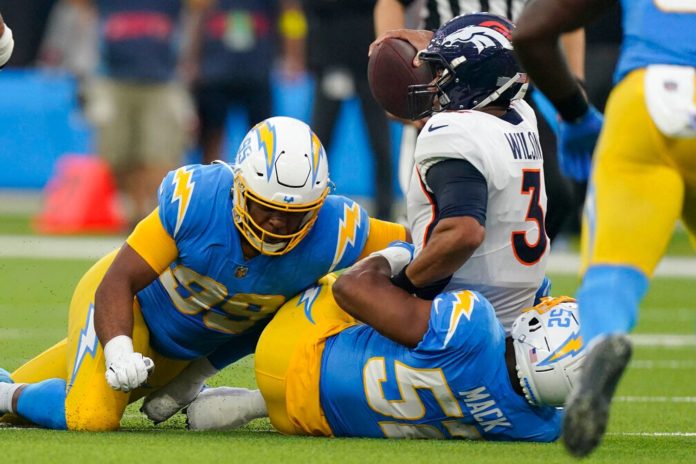 The Broncos season comes to an end this week when the Los Angles Chargers come to town this Sunday. Game time is tentatively scheduled around 2 p.m. at Empower Field at Mile High.

(So perfect timing for viewing this one at one of our prime sports bars/ eateries in Green Mountain Falls, Crystola, Woodland Park, Divide, Florissant or Cripple Creek or whatever, as you will definitely need nourishment and a favored beverage to finish off the season in style.  Plus, since the Broncos are involved, maybe make it two beverages.)

As probably all of you know, Broncos Head Coach Nathaniel Hackett was recently given the ax,  and has been temporarily replaced by Jerry Rosburg. Rosburg was hired earlier in the season to tutor Hackett in game management. That alone was a sign Hackett wasn’t going to survive as head coach of the Broncos. The firing of Hackett is just the 5th time in NFL history that a head coach was fired before the end of a season.

At 10-6, the Chargers have clinched the last wild card spot in the playoffs with the sixth seed.

Last week they beat the Los Angeles Rams 31-10. Chargers’ Quarterback Justin Herbert is a top five quarterback in the NFL. Last week he passed for 212 yards and two  touchdowns against the Rams. He’s the real deal and can beat you with his feet as well as his arm.

Sometimes when a team clinches a playoff spot, they rest their starters in the last game or two, so they are healthy and rested for the big show.

With minutes remaining in last week’s game, Herbert was benched for Chase Daniels when the Chargers had the win well in hand. Will Daniels start against the Broncos on Sunday? Let’s hope so.

As for the Broncos, the were beaten for the 15th straight time by the Kansas City Chiefs last week 24-27.

This leaves the Broncos with a 4-12 record and the most dismal season in memory. With Rosburg taking over the head coaching job, there was a major shakeup in Bronco country. Within minutes of Rosburg taking over, he fired Special Teams Coordinator Dwayne Stukes and Offensive Line Coach Butch Barry. Rosburg is a former special-teams coach for the Indianapolis Colts and is a no nonsense guy. He’s old school.

Against the Chiefs last week, the Broncos did a decent job keeping up with the mighty Chiefs and were in the hunt for the win right up to the end of the game. Had the Broncos converted a fourth and two with 1:21 seconds left they may have pulled off the tie with a field goal. But alas, Russell Wilson was sacked and the ball went over to the Chiefs who sat on it until time ran out. The fact that the Broncos were able to keep pace with the Chiefs in Arrowhead is a testament to the grit and determination the Broncos showed despite the miserable season.

There was a lot of talk about Wilson this week too. Many were calling for his head, although due to his contract the likelihood of him being canned is zero. Former Bronco and Hall of Fame tight end Shannon Sharpe said Wilson is more concerned with being a star than being a football player on his show, “Undisputed” with Skip Bayless. Sharpe also raised eyebrows by saying Wilson is “unlikable” in the locker room. Several Bronco players came to Wilson’s defense after the accusations.

Anyway, the on-field drama will end, at least for this year after this week’s game for the Broncos. Broncos owner Greg Penner has promised an intense search for the team’s next coach.

With all the money the Walton-Penner group has, you can bet money will be no object when it comes to a contract for the next coach. The Trouble is: Who in their right mind would want to step into the situation the team is in right now? Time and a lot of money will tell the tale over the next few months, and new drama will fall like the sword of Damocles over the franchise.

If Herbert and a few other starters are rested, the Broncos can win this one. If Herbert starts, the likelihood of a Bronco win dims considerably. It would be nice to end the season with a win, even if it’s just a morale booster. The early predictions are favoring the Chargers by 3.5 points.