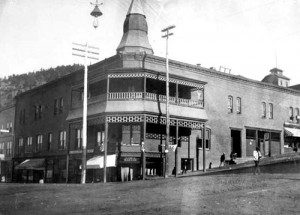 Serious crimes in Teller County today still occur, as we have experienced a few notable incidents gaining national attention. But the nature of these offenses have changed from the booming gold rush era, when shootouts between lawmakers and outlaws often occurred.

In the late 1800s, Cripple Creek/Victor and the rest of the county played a major role in the development of the Wild, Wild West.

During the heyday of the Cripple Creek mining district, the area bustled with a lot more people, with some reports indicating a population of close to 50,000. In addition,  the crimes that occurred were true to the Wild West era as sheriff deputies were busy dealing with incidences of murder and robberies. And at times, justice proved to be hard to serve with a high percentage of arrests turning into deadly shootouts.

The following is an account of one of the more colorful shootouts regarding an arrest that sometimes gets forgotten. It is based on stories provided by a variety of  local newspapers, at the time, including  The Mountain Journal, The Colorado Democrat, The Rocky Mountain News, The Avalanche, Silverton Standard, The Colorado Weekly  and more.

Early in the night of October 12th, 1894, three men arrived at Williams & Welty’s Stable in Victor, Colorado to acquire three horses. One man was about 160 pounds with a red face and heavy moustache. Another was average size with a darker complexion. And one was tall with a light complexion.

Then at about 1 a.m. in the morning of October 13, the three men arrived armed at the Hotel Victor’s faro bank (where the card game of faro is played). They swept into the room from the darkened street with revolvers drawn.

With their prize in their possession, the gunmen took one last look around the room before backing out into the dark of the Victor streets. And though the men were masked at the time of the robbery, the Cripple Creek newspaper, the Morning Journal, reported that at least one of the men had been recognized.

Mysteriously, when men made their way outside to give chase, a lone saddled horse was standing abandoned in the street. It was one of the horses the three men acquired from the Williams & Welty Stables the night before. A rider jumped into its saddle to ride hard for Cripple Creek to contact Deputy Sheriff K. C. Sterling.

Later that morning, a man came down Bull Hill leading Williams & Welty’s other two horses. Two men that matched the description of the robbers had paid him to take charge of the horses and return them to their home.

The next day, the man running the faro table identified the two suspects as James Cannon and Thomas Short. Cannon first went to his union’s offices to pay up on his seriously delinquent union dues and then he joined Short at the Gillette races.

Deputy Sheriff Sterling received word that Cannon and Short would be at the Gillette races that day. And at about 4 p.m. that afternoon, accompanied by deputies E. B. Eyer and Lew Hayes and Deputy Marshall Tinsley, Sterling entered the grounds and demanded their surrender. Despite threats made by friends of the detainees, the officers completed the arrests and transported the two men to the jail in Cripple Creek.

At about 8 p.m., word reached Sterling that a party numbering upwards of 100 men were making their way to Cripple Creek to demand the release of Cannon and Short. Sterling was also informed that this was probably an armed party whose real purpose was to break Cannon and Short out of jail.

Sterling, accompanied again by Eyer and Hayes, loaded the two prisoners into a horse-drawn conveyance and headed for Florissant to catch the train to Colorado Springs to house the detainees in the city’s jail. But no train was bound for the Springs was due there that night, so Sterling and his party made their way to Divide.

Once in Divide, Eyer and Hayes began the process of unhitching the horses when Cannon and Short got their hands on a couple of rifles and demanded the keys to their shackles. With two rifles pointed at him, Sterling thought fast and stepped forward, wrapping an arm around the barrel of both guns.

Sterling later recounted the incident: “I advanced and put my arms around each gun and called for the guards. Then one of the prisoners drew a revolver from my belt and hit me over the head with it. I saw they were getting the best of me, so I wrenched one of the guns from the prisoners, and said, ‘I’m shot’ and managed to get out the door.

“Both of the prisoners ran out, and while going away took a shot at me. They ran to the railroad tracks where there was a large pile of ties. I shot three times and told them to come with me. They said they would give up so I went to them. Cannon was lying across the track and dying. Short was badly wounded.”

Cannon had been the victim of two bullets, one of which entered his chest just above the left nipple and deflecting downward through his heart, and the other that entered his head near his mouth. Short had actually been shot in the leg. He later confirmed Sterling’s account of the shootout.

It was then reported that C. B. Flynn, the Superintendent of the Nightingale Mine where Cannon and Short worked, bailed Short out of jail and took him to a Colorado Springs hospital to receive treatment for his leg. The physicians stated that the wounds were in no way life threatening and predicted his full recovery.

Author Unknown. (1894, October 17). SHORT IS RECOVERING: And is now resting easily in the hospital at Colorado Springs, his wounds not being serious. The Morning Journal. 1.

Author Unknown. (1894, October 19). CANNON’S FUNERAL: The Dead Miner Followed to the Grave by a Large Cortege. The Morning Journal. 1.