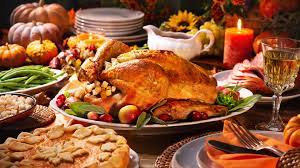 This characterized the outcry of area residents, community leaders, business owners, first responders, parents, school kids and even journalists as the Aspen Mine Center in Cripple Creek  got invaded last week by Turkey and stuffing-goers and many who just wanted a place to hang out and prepare for the holidays.

They weren’t disappointed, as no one in southern Teller went away hungry. Plates were loaded with ample portions of turkey, rare stuffing, mashed potatoes, rolls, sweet corn, green beans, and Thanksgiving typical ingredients, not to mention a spree of award-winning pies.

And at times, the spacious facility reached a capacity crowd with nearly 150 jammed into the infamous Turkey  hub around lunch time.

Last Wednesday, the Aspen Mine Center East hosted its annual Community Thanksgiving Dinner, an event that has been interrupted for several years due to the COVID epidemic and the associated health and social distancing rules.

But on Nov. 23, the Aspen Mine dinner returned to a full-fledged, in-person feast status, as more than 350 people partook in the event or received hefty take-out portions.

“This is the first time we have been able to do this event like we did in the past in several years,” said Ted Borden, executive director of the Community of Caring, which sponsored the community Thanksgiving dinner. “This is one of my favorite events of the year.”

The Aspen Mine Turkey feast in the past became known as the kick-off of the holiday season, and for many, it was regarded as their favorite outing and a way to give thanks.  The event took on even more special meaning this year, in lieu of the recent  shooting massacre in Colorado Springs (see related story).

When COVID struck in 2020, the event got cancelled and then had a drive-through, take-out option the following year, and then last year, it operated with partial in-person servings and take-outs, with most favoring the latter choice. Somehow, it just wasn’t the same, noted many locals.

But alas, this year  the whole feast returned to southern Teller in traditional style, inside the comfortable setting of the Aspen Mine Center East facility. Locals reveled over the rebound of a popular meal, which  many admit (privately) they even like more than their regular Thanksgiving family gatherings.

Many southern Teller residents enjoy the opportunity to get together socially, as this is often the final day before the real Holiday festivities begin. Unfortunately, this is a time of stress for many in the community and offers a respite before Black Friday and other less-favorite Yuletide gatherings.

The buffet-style Thanksgiving feast got a helping hand from a spree of nonprofits, including many area churches and religious organizations, and a record number of volunteers.

“I don’t think we ever had this many volunteers,” commented Borden, who estimated that the event had close to 100 volunteers helping out in various functions. About 40 were actively involved in serving and preparing portions, including key area elected officials, such as Teller County Commission Chairman Dan Williams, and many representatives of Charis Bible College.

Borden stated that at least 30 turkeys were prepared for the in-person gathering that attracted a huge crowd around lunch time. “At one point, there was not an empty seat in the  entire facility,” quipped Borden, who said the crowd  nearly hit the 150-person level.

In addition, the Community of Caring director cited a huge outpour in donations from several casinos and many faith organizations and businesses and anonymous donners. For example, Bronco Billy’s donated 35 turkeys, which were given to needy families and to first-responders. Johnny Nolon’s also got into act and donated a huge amount of food.

The event also served as a debut of sorts for the reorganization of the Aspen Mine center. The Aspen Mine East facility is now going to be used for events and food pantry and retail uses.

And under this reorganization, the Aspen Mine West, will now serve as the hub for resource organizations and services, housing offices and outlets for close to 20 organizations. It occupies the former building used by the former Madame June’s casino.

The grand opening of the Aspen Mine West, an impressive renovation project fueled by a big grant from the state, occurred late last summer.

“It has been going very well,” said Borden, in describing the reorganization plan and the effort to use two Aspen Mine facilities.

But last week, the main subject on everyone’s mind dealt with one popular activity: consuming huge portions of turkey and stuffing.