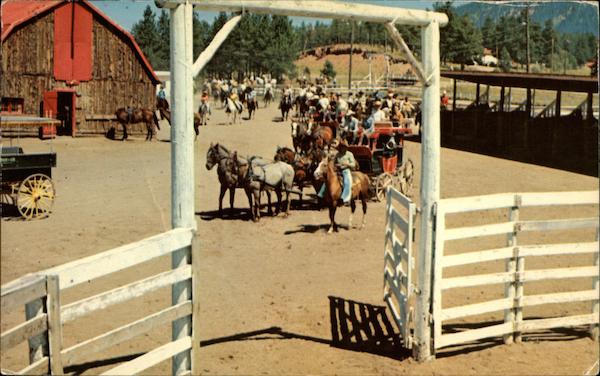 Throughout its history, the Woodland Park area has attracted a wide array of colorful characters that became local legends and sometimes generated national attention.

In fact, a slew of past stories have  centered around the dude ranch owner who played a pivotal role in the story behind the word famous Paradise Ranch.

Frank Seymour Snell, Jr. was born on June 14, 1895 in Denver to his father, Frank, Sr. who was a well-respected designer, architect and builder in Denver.

Snell spent a lot of his life driving stagecoaches back when that was the main mode of transportation. He also used to drive mule trains full of ore from Cripple Creek to Colorado Springs.

At one point in his early days, Frank worked for a construction company in Los Angeles as a horse and mule trader. During that time, he was arrested on February 16, 1917 for the embezzlement of  10 mules which he intended to sell to the French government.

Later in his life, Frank and his family moved to Colorado and Frank found himself running stagecoaches up and down Ute Pass due to a fuel shortage caused by World War II. By 1944, Frank and his business partner Joseph Shabouh owned an automobile livery business in Manitou Springs that would take tourists up to the top of Pikes Peak and other scenic destinations.

In late 1944, Frank and his partner Joseph purchased the Paradise Ranch from its original owner, Roscoe Cox.

The History of Paradise Ranch

The ranch that would soon become the “World Famous Paradise Ranch” was originally the idea of a Kansas City man named Roscoe Cox. The construction of the ranch started in November of 1936, and the ranch officially opened in June 1937.

The ranch’s grand opening event was known to be “invitation only” and more than 300 guests showed up. The news reported that all of the guests who arrived on the opening day had a “wonderful time.”

The ranch originally featured 18 cabins that were completely furnished. The ranch’s main lodge had a soda fountain, dining room, dance floor, and a cocktail lounge called “The Paddock.”

Shortly after purchasing the ranch, both Shabouh and Snell were charged with permitting gambling at Paradise in the fall of 1944. Both were found guilty of operating games of roulette, dice and blackjack as well as slot machines. They both pleaded “no contest” to the charges and were fined $500 each and sentenced to three months in jail. However, they were placed on probation and avoided serving the sentences.

In June,1949, Frank bought Joseph’s portion of the ranch for $200,000. This made the Snells the sole owners of the property. The stories say that once Frank and LaVera were the owners of the ranch, it quickly became one of the finest dude ranches in America.

One thing unique about the Paradise Ranch was that Frank was one of the most avid stagecoach collectors in the country. Frank would buy stagecoaches from all over the United States and Canada, including ones that were used in movies like Ben Hur. By 1949, he had 18 coaches and tallyho’s that were all absolutely authentic and in pristine condition. He had them painted and varnished every year to keep them from deteriorating.

Frank would use the stagecoaches to take the guests to various destinations across the area, including church on Sundays and the Pikes Peak or Bust Rodeo in Colorado Springs. He was also known to hold stagecoach races to entertain his fans.

One of the main perks of the ranch was that every guest had a horse to themselves during their stay. The ranch had more than 300 horses including several ponies for kids to ride.

A typical day at Paradise Ranch included swimming, stage coach sightseeing trips, a chuck wagon dinner, horseback riding lessons, movies, special parties, dancing and of course horseback riding. Special activities included things like overnight pack trips and a fish fry in the mountains. There were many types of games too, like tennis, badminton, shuffleboard, archery, ping pong, horseshoes, croquet and softball. There was even a library at the ranch.

Sundays were known as being some of the best days to be a guest on the ranch. Every Sunday, besides offering a free stagecoach ride to any church in Woodland Park, Frank made sure plenty of activities were available for the guests, including an all-you-can-eat smorgasbord.

Frank would also host stagecoach races and a rodeo on every Sunday. Even though Snell proclaimed his rodeo stock as some of the best in the country, that claim wasn’t really true. Much of  his stock was old and worn out, as they had been sold off by big name rodeo stock companies. But regardless, the horses provided tourist sand visitors on Hwy. 24  good entertainment.

Eventually, Frank decided to retire from the resort industry. He sold the ranch in 1970 to a group of Colorado and Texas businessmen. And by 197,5 it filed for bankruptcy. In 1978 many of the out buildings and cabins were auctioned off and moved from the site.

The massive barn at Paradise, which was built in 1944, was razed for a parking lot for the new Safeway store that was built on the old rodeo grounds. The lodge stood unused for many years and was contaminated with asbestos. It was eventually torn down in 2015, except for the large dining room chimney, which remained until 2017. The chimney was then  cleared out to erect the Natural Grocers store, which now sits on the site.