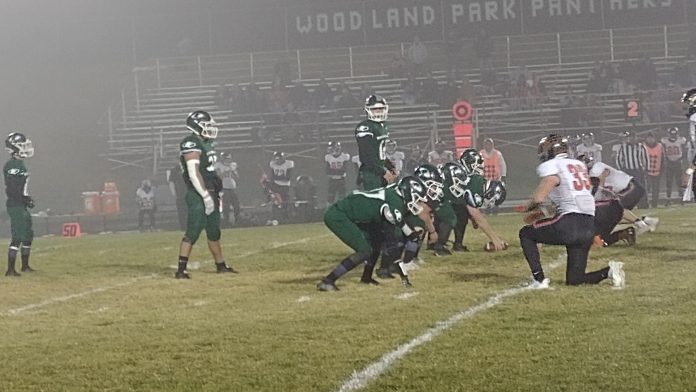 The game was a definite nail biter for Panther fans as the team was behind for most of the contest.

But in the end, the team did not disappoint Panther Nation as they came back and won their fifth game in a row in overtime against the La Junta Tigers. The final 14-6 score proved to be a tough defensive match on both sides.

At first the game looked like the high school version of the Broncos vs. Colts game the night before as it was low scoring and defense-dominated. But at the end of the game, both high school teams scored a touchdown which neither the Broncos nor the Colts could do after five quarters of play last Thursday.

Many locals, in fact, have jokingly said that the Panthers could beat the Broncos and the Colts if they had match up with either pro team. And the Panthers’ ability to hang in tough until the very end of the match could prove the local jokesters right.

The game definitely started off slow with both teams punting back and forth. At the end of the first quarter the score was still tied at zero. In the second quarter, the game took a slight downturn for the Panthers due to one bad play.

The Panthers went to punt and the snap flew over the Panther punter’s head. The punter tried to recover it and make a play but he was tackled for a big loss of yards.

The Tigers then capitalized off of their good field advantage and scored with a long rushing play. The team missed the extra point giving the Tigers a 6-0 lead over the Panthers.

The scored stayed 6-0 at halftime and the third quarter looked about the same as the first with a lot of punts and no scoring. In the fourth quarter, the Panther defense held tough and didn’t allow another score from the Tigers.

The Panther offense then started to gain momentum in the final minutes of the game. A passing touchdown then put the Panthers on the scoreboard with only three minutes left in the game. But the extra point attempt was blocked leaving the score in a 6-6 tie.

The final minutes of the game left Panther fans at the edges of their seats as La Junta drove the ball down to the Panthers’ 8-yard line. But the Panther defense stayed tough and prevented the Tigers from scoring at the end of the game.

The Panthers forced a turnover on downs with less than a minute left in the game and got the ball on their own 14 yard line. The Panthers then kneeled to send the game into overtime.

In high school, the overtime rules work a little different than college or pro football. The winner of the coin toss gets to elect to be on offense or defense.

The ball then gets place on the 10 yard line and the first team gets four downs to make ten yards and score. The opposing team then gets a try on the 10 to tie or beat the score. The overtime period ends when one of the offenses does not score or tie the game.

The Panthers won the coin toss and elected to get the ball first. The Panthers got into the end zone with a rushing play and then they ran it in again to get a successful two point conversion.

The Tigers then got the ball at the 10 when they were behind 14-6. The Tigers attempted to tie the game, but their try proved to be unsuccessful when the Panthers intercepted the ball ending the game in a big win for the Panthers.

The Panthers now have a 5-1 overall record and a 2-0 league record. Before the Panthers’ victory last Friday, they were ranked in eighth place statewide in the 2A Division. With the win, the Panthers’ now will further advance in the top state rankings.

The team’s starting quarterback, junior Bryce Broeker, has made 13 completions out of 25 attempts for 125 yards so far this season. And, he has earned the most yards on the team with his 221 rushing yards.

This week, the Panthers probably have their toughest match of the season coming up. On Friday, the Panthers travel south to take on the brutally tough 5-1 Florence Huskies.

At the end of last week, the Huskies were ranked number four statewide in 2A versus the Panthers’ number eight ranking. Florence is currently in first place in the Panthers’ 2A League, following their 60-0 shutout of the Manitou Mustangs last week.

The Huskies’ star quarterback, the 6’4” 188 lbs. senior Levi Paxton, has proven his ability to rack up big scores. However, the Panther defense should be able to tame the Huskies’ star as the have only given up 27 points in all of the six games they have played this season and 21 of them came during one match. In their last five games, the Panthers, who are renown for the pound and ground-style of play, patterned after the old Pittsburgh Steelers, have hardly yielded a single point.