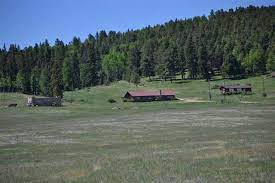 Dude ranches proved to be very popular in the Teller high country years ago,  and are a key aspect of the region’s equestrian/cowboy legacy.

In fact, many would say that these ranches helped shape what the region is today.

One famous family successfully ran two dude ranches in the area. The Hermann family made a name for themselves locally when they had both a boys’ and girls’ ranch in the area.

Lee Hermann spent his childhood in Brooklyn, NY before he went to Syracuse University and earned a law degree from St. Lawrence Law School. While in New York, Lee married Frieda in 1924 who was more commonly known as “Fritzie.”

In 1927, they both passed the bar exam and they started their own practice called the Hermann and Hermann Law Firm. Since back in those days, it was very uncommon for a married couple to also be business partners, the Hermanns were featured in newspapers all across the country and became famous.

Shortly later, the Hermanns gave up their law firm to work full time with children. That same year in 1927, the couple started a traveling camp where they would load up kids and journey across the map to places like Mammoth Caves, the Smoky Mountains, Grand Canyon, and Zion.

Then while traveling that year, Lee and Fritzie came to Colorado and fell in love with the state. They ended up opening their first ranch on a five acre plot in Westcliffe, Colorado called the Valley View Dude Ranch.

After operating the ranch for 10 years, the Hermanns then decided to move the operation to a piece of land located west of Woodland Park and south of Highway 24 near the old town of Edlowe. In 1937, they named their new venture Quarter Circle H Ranch and it started as a co-ed dude ranch for people 18 to 22 years old.

“By the time kids reach teenage…they have been exposed to camp life in all its forms – Scout camp, 4-H, YMCA. And they think 15 they’ve had it. But a guest ranch of their own, without regimentation, where the kids would be on their own, run the show, map out their own play and chores – that would have special appeal,” said Lee Hermann in an early Gazette Telegraph article.

After another decade, the family decided to expand their operations when they purchased the old El Rancho Tejas Guest Ranch in 1947. Now that they owned around 2,500 acres between their two properties, they made the decision to turn the El Rancho Tejas property two miles northeast of Woodland Park into a ranch just for girls and make their spot west of Edlowe a ranch for only boys.

Being a former resort, the girls’ ranch had four room cabins and a large log cabin house for the recreation area. The ranch was also located next to the Pike National Forest which gave the girls plenty of options for horse riding trails. But, the boy also experienced certain perks as during the summer of 1949 they were bussed to the top of Pikes Peak every other day to witness the sunrise.

The campers coming to the ranch for the summer season mostly came from wealthy families living in big cities like New York, Chicago, Houston, Dallas, or Los Angeles. The Hermanns would travel the country during the winter to recruit people to their ranches.

While there, the ranch’s campers could enjoy activities like horseback riding, shooting, arts and crafts, dances, sports, melodramas, and “real western hoe-downs.” It was a known fact that every rancher at both locations had their own horse for the time they were there. In fact, at one point, the Hermanns owned over 150 horses between the two ranches.

The Hermanns worked hard to offer their guests a real Wild West experience and tried to give them knowledge of what running a ranch was like. As a part of the operations, the Hermann’s also grew lettuce, potatoes, oat hay, and native hay.

Once a year, both the boys and girls’ camps would celebrate Colorado Day with a huge ranch get together including visiting parents. The two camps big end of the year event would always kick off on a Saturday, where the campers would compete in games between the boys and the girls at the Silver Spur and the Quarter Circle H.

These events climaxed on Sunday evening with the annual melodrama given by the “ranchers” for their parents and guests. In 1956, there were over 700 people from 28 states attending the party hosted by the Hermanns.

Fritzie Hermann then passed away in 1949. After her death, Lee and his second wife Gus ran the Quarter Circle H Girls’ Ranch while Lee and Fritzie’s son Eric “Ric” Hermann and his wife Til operated the Silver Spur Boys’ Ranch.

Both ranches ceased operations in 1960, but afterwards Ric and Til Hermann opened and operated the Pikes Peak Ranch for Boys and Girls at the Silver Spur location for several years in the early 1960s. Lee Hermann then passed away in 1969.