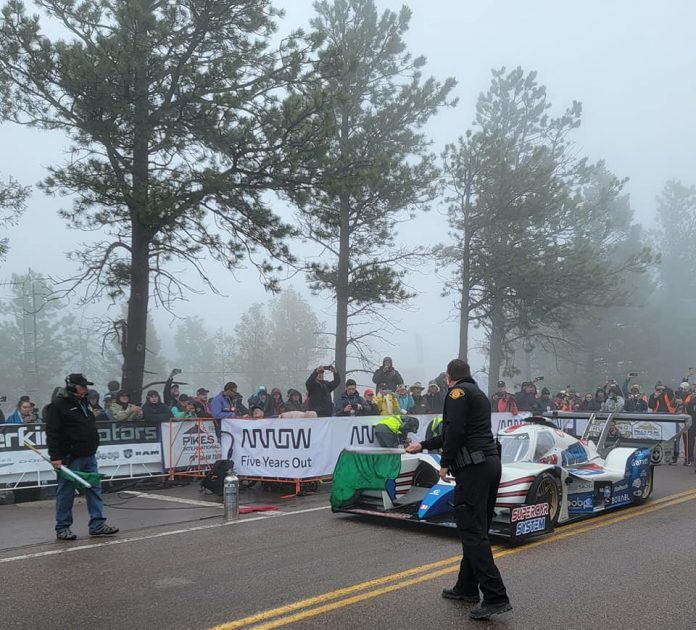 Of course, this has been a familiar trend for the famous race up America’s mountain, where rugged, winter-like temperatures often prevail and test racers to the max.

Luckily, the weather subsided enough so that the drivers could race the entire course. In past years, the track to the summit was closed

However, the day did bring about frigid temperatures, high-speed winds, and very poor visibility due to extremely thick fog. In fact, many of the racers said after their runs that the course (especially the last section above timberline) was “absolutely terrifying.” One driver said a turn came up too quick for him and he ended up rolling his car twice, getting back on the wheels, and still finishing the race.

Even the fastest drivers said that the course slowed them down to the point in which breaking a record during the 100th race became impossible.  Veteran driver Robin Shute earned the “King of the Mountain” title with the fastest time up the Peak at just over 10 minutes and nine seconds.

Colorado Springs resident and veteran racer David Donner took second with 10:34 and third generation Woodland Park driver Codie Vahsholtz ended up in fourth place overall with a time of 10:38.259 and a top speed of over 120 miles per hour. Codie Vahsholtz did, though, take home the first place trophy in his open wheel division beating out previous champion Paul Dallenbach by over 25 seconds.

Unfortunately, Codie’s father, Clint Vahsholtz, was not able to compete in the race this year. Clint had initially planned to try to conquer the fourteener in an Aston Martin racecar with a rookie racing team. But, the team was not able to get the car ready in time for Clint to qualify for the race.

Woodland Park resident Dave Wood had a good run at first as he whipped past the Picnic Grounds at nearly 100 miles-per-hour, but he came just short of finishing the race when he went off the course in the Boulder Park area past Devil’s Playground before the finish line.

Area Boasts of Oldest Racer in History of Event

Cascade resident 82-year-old Ralph Murdock whipped past a straight away at an extreme speed of 103 miles-per-hour. Murdock finished the race with a time of 13:18.135 making him the oldest person in history to ever finish the race.

Overall, the 100th running of the famous hill climb up America’s Mountain went by pretty smoothly as there were only a few short red flags and no major wrecks that resulted in injuries. To honor the race’s 100th running, the officials let different people wave the green flag to the drivers such as the racers’ wives or crew members. This honor was even bestowed on Teller County Sheriff Jason Mikesell.