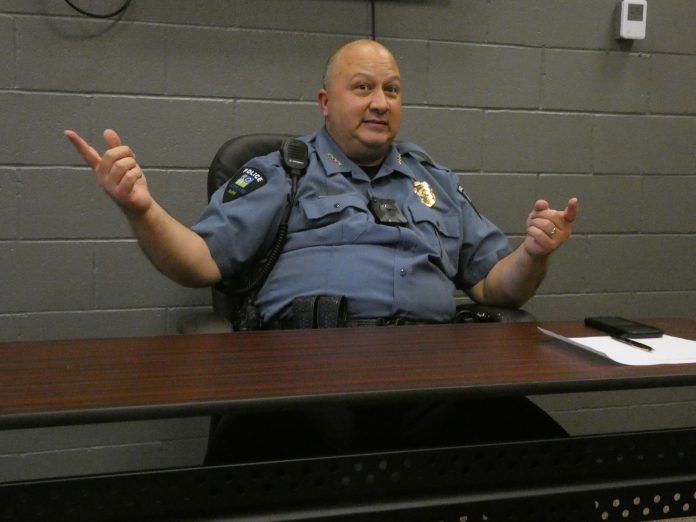 As soon as Woodland Park Police Chief Chris Deisler took his new position in March, he quickly started with an agenda to bring about changes to the struggling agency, which was bombarded with problems over leadership and a reported bad working culture.

One of the first goals  he wanted to pursue  involved  re-establishing trust between the police chief, local officers, and the public.

After being the head of the force for only a few months, the chief has already made strides in building his relationship with his staff and other members of the community. In fact, Deisler  began his efforts to connect with citizens while he was living in Florida and going through the application process before he was even offered the job.

As a part of his initiative of being transparent to the community, the chief has already started posting information on social media pages, and he plans to produce weekly police reports to publish in local newspapers.

Deisler also had the idea to hold monthly community forums during which members of the public can sit down with the chief and other police department staff and express their concerns.

The meetings are slated to take place on the second Wednesday of every month. The first community forum was held last Wednesday at the conference room inside the Woodland Park Police Department building.

For the first forum, several community members including representatives of the city council and the  Teller County Sheriff’s Office appeared.  Due to the large turnout, the police chief said that the venue might have to be changed to another, bigger location for meetings in the future.

The chief started the forum by introducing himself and telling the crowd the story of why he decided to apply for the head of law enforcement. He said that he had always wanted to move to the mountains and started looking for jobs in Colorado when he found the open chief position in Woodland Park.

The chief said that after he saw the opening, he started reading about the misconduct allegations surrounding the previous chief and two commanders, which ultimately led to either the terminations or resignations of all three top police officials. But, he said that instead of running away from the problem (like some may have done) he decided to run towards it.

He said that the meetings are a way to re-establish the public’s trust in the leadership at WPPD. “I am going to tell you I had an amazing team in Florida, but these folks have shown me things in two and a half months that I never saw back there,” the police chief said.

“What you all have had here for years, and never really had the benefit of knowing you had, was this hard-working team. When we are doing some good stuff, you are going to hear about it. Part of the process is involving you all in that. Overwhelmingly what I heard from community members, leaders and otherwise in this community was that you trust the cops, you just didn’t trust their leadership. And, I understand it.”

The first question from the audience came from someone who was concerned about the recent school shootings across the country. The resident said they were worried a similar event could happen locally and asked what proactive steps were being taken by local law enforcement agencies to prevent similar incidents.

Deisler responded by saying that the police department has a close relationship with the school district and the two organizations just recently had a meeting. “What I have found in my short time here is that all of the officers and deputies have gone through joint trainings for reaction to active shooters,” Deisler said. “But I am going to tell you all that the campuses here give me the cold chills because they are not hard enough.”

The chief said that the schools have implemented some safeguards, but that there is work that could still be done to improve the schools’ security. He said the department has taken several steps to put more school resource officers (SROs) inside each of the campuses in the city.

But, the chief also said that he was confident local law enforcement had the training necessary to handle an active shooter situation should it occur. He said that the officers carry tourniquets and he wants to get them equipped with more emergency medical gear in the near future.

“I can tell you that since the new chief has been here, he and I have worked together on these school campuses,” Teller County Sheriff Jason Mikesell said. “Those SROs are in the schools now. Previous to him being here, they weren’t in the schools as much.”

The sheriff also said that the county has a multi-jurisdictional SWAT team that includes officers from all of the law enforcement agencies in the county. He said that they have taken many safety steps in the county, and they are available should a mass shooter situation arise anywhere within Teller.