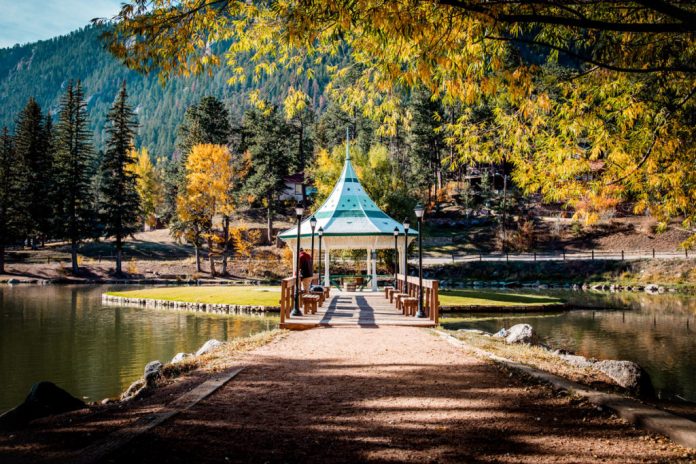 Last week, the GMF Board of Trustees, with several new elected leaders, signaled the thumbs-down for continuing its current program with the Interstate Parking Company of Colorado during a public workshop.  If this occurs, GMF’s experiment with paid-parking for a more managed system of manning visitor traffic and parking will likely end.

A community-wide meeting is scheduled for June 2 at 6:30 p.m. at the Sally Bush Center, with the elected leaders slated to take final action on June 7.

But unless some strong public opinions are voiced in favor of the controversial paid-parking system by residents, the infamous parking kiosks aren’t likely to return, a development that is clearly favored  by current business owners. The paid-parking system is despised by local business owners who contend that it makes the town almost anti-tourist, and clashes with the friendly spirit of Green Mountain Falls. They also maintained that visitors told them they would never return, and would opt to dine, drink and shop elsewhere in such places as Woodland Park instead, as they have no parking fees.

Comparisons were  also drawn with Manitou Springs, which struggled initially with its paid-parking system.  Other complaints circulated regarding overall confusion by visitors and residents alike.

“It is a killer,” blasted Trustee Nick Donzello, in describing the current paid-parking program, which started late last spring and continued for several months. “The purpose seemed to be deterring people from coming here. That is the perception…I just didn’t hear any positive things about it.”

“They are in breach of contract,” said Mayor Todd Dixon, who admitted he initially favored the program conceptionally, but has now altered his stand. The mayor questioned why their parking kiosk devices were not already in place for the 2022 season.

He said the program was done to enforce illegal parking in residential areas near trailheads and to provide the town with a little revenue. “Neither of those (goals) panned out,” said the mayor, who cited continual problems with the  contract and lack of follow-through by the company.

Trustee Sean Ives, who lives at the border of one of the town’s key trailheads, stated that current business owners are losing significant revenue, as they try to rebound from the pandemic. He cited one operator who told him their business was losing an additional $5,000 a month due to the paid parking system. The sales tax revenue generated from last year, compared to the prior year when the town didn’t  have any paid parking, declined by about $50,000, according to GMF Town Manager Becky Frank.

Even Katharine Guthrie, the most senior member of the trustees, and who was part of the vote favoring the contract with Interstate, admitted that the end goals weren’t achieved. “I don’t think they  honored their contract.  I would see cars parked in the same areas (illegally).”

But that said, Guthrie admitted the first-year is often rocky for a new paid-parking system, similar to what occurred in Idaho Springs. Idaho Springs was often touted as the model for Green  Mountain Falls, based on the assessment of consultants for the project.

Instead of pursing the current contract, town leaders want to explore doing a more managed parking system in-house with the use of better signage and increased law enforcement patrols and heightened code enforcement action. They also may realign the current parking spot allotment and add additional areas. After hearing the input from the trustees, Frank indicted GMF could still pursue its goal of having managed parking, but achieve this in a different manner. “We are still going to have managed parking. It is just going to be different,” said the town manager.

Many details still need to get worked out, such as the increased cost of law enforcement for manning parking problems and having better signage. “We are on the hook for providing that service,” said Dixon.

“There will be a price tag,” admitted Guthrie. She bluntly told her fellow trustees that even if they eliminate the kiosk devices and do away with paid parking, the community’s problems with a huge surge in hiker traffic and illegal parking aren’t going away.  As she has stated in previous meeting, Guthrie noted that if a price tag is applied to certain recreational amenities, people respect them more and behave better and interact with businesses more.

Past local concerns have  also dealt with bad hiker behavior.

But at last week’s workshop,  Ives contends this situation is overrated and can get solved by direct communications with the violators. “Most people are not malicious,” said Ives.

He stated that most hikers who parked illegally in his neighborhood were just looking for an easier access to the trailhead. He said he has had mostly positive interactions with potential violators.

During the pandemic, the town’s trail system, capped  by the popular Catamount Trail and the opening of the Mt. Dewey route, experienced a huge hike in usage. The popularity of Green Mountain Falls’ trails has actually increased since the closure of Waldo Canyon and with the increased sign-up registry rules and occasional shutdowns for the Manitou Incline.

At last week’s workshop, Frank threw out a few ideas of continuing to work with the current contractor by eliminating free paid-parking for two hours for visitors and establishing a validated parking systems with downtown business operators, which would allow their customers or patrons to park for free.

The Interstate contractor actually wanted to put the program on a one-year pause period. It cited economics, contending that it lost close to $100,000 during the first-year of operations, based on the investments it made in Green Mountain Falls.

Part of this loss was accelerated by the theft of one of their large kiosk machines.  This incident outraged former Marshal Virgil Hodges.

Despite Frank’s suggestions for a compromise, the majority trustees appeared to favor killing the current program with Interstate and having town staff and volunteers doing the parking monitoring, with the marshal’s office taking the lead role. This idea was favored by new GMF Marshal Sean Goings.

Trustee Sunde King, though, cautioned the board about not seeking more input from the residents. She stated that many citizens favored the paid-parking program.  Both her and Guthrie advised the board to hear from the citizens overall and not necessarily the loudest critics of the paid parking.

She outlined the results of a former survey, which made it clear that the town had a problem with managed parking. At the time, she stated that doing a contract with a parking contractor was lauded as the top choice among several alternatives.

The forthcoming community meeting will be fairly informal, with few prepared presentations.