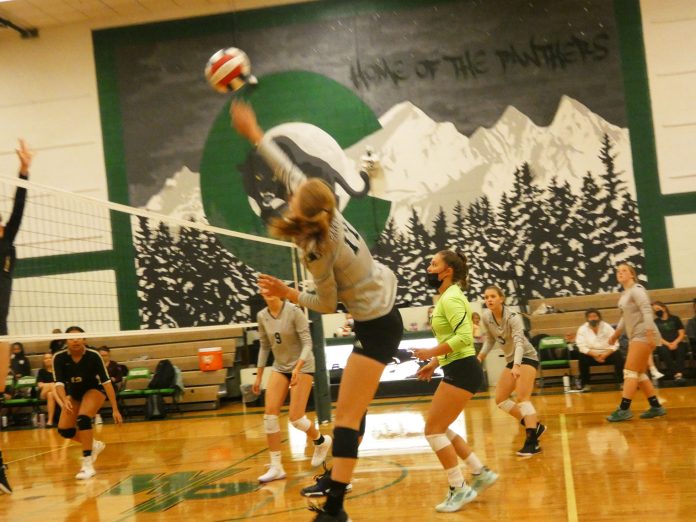 Now that all of the high school fall sports are officially over, the results prove that local athletes put on quite a show during the 2021 season, especially after being interrupted by the COVID-19 pandemic.

In fact, on paper all of the teams as a whole did much better than they have in previous years. Even though no teams brought home a state title, more local teams  placed well and won their respective leagues, compared to the past few years.

The golf team was the first season to end, and they were the first Woodland Park team to take home the bacon in first place in their league. And this is despite the absence of big-star linksters, who in past years may have tinkered with all-par rounds. The only major disappointment of the season came in the regional tournament, as the team’s best golfer missed qualifying for the state tourney by one stroke. Blame it on the super-fast greens at Pueblo’s Walking Stick course, or the fact that the linkster played with two TMJ staffers at one point in hid high school career.   Definitely a no-no for swings to emulate.

Both the boys’ and girls’ cross country teams also had a good season this year, and the girls’ team actually dominated. The girls’ cross country team won their league and finished good enough to earn a spot in the state championship tournament. The ladies battled in the state tourney last week,  but fell short of making into the top ten. Still, it was regarded as a great year for the girls’ runners, with much promise for the next few seasons.

According to Woodland Park High School’s Athletic Director Chad Cosner, the cross country team should stay successful for the next few years to come. “All of them are coming back next year,” the athletic director said. “I think we have one senior who is graduating and she was our alternate. So, most of the team will be coming back next year.”

The high school marching band this year not only did a fine job entertaining the packed stadium during football games, but they also rocked it when it came to competitions. For the first time in more than a decade, the marching band qualified for the state championship competition.

The high school cheerleading team also proved that they are not only girls who lead the crowd in cheering for the home team, but they are masters of their craft. During competitions this season, the high school cheerleaders took home their league first place trophy, and they did well enough to make it into the state cheer semi-finals championship for the 3A contest that takes place on Dec.  10. The top four teams that place in the semi-finals will then compete in the state finals on Dec. 11.

According to the cheer squad’s coach Shania Lampton, the girls are focusing on ways to increase their points during competitions before the state semi-finals. “We have about three and a half weeks to increase our difficulty level,” Lampton said. “We have gone into these last couple of competitions trying to find out what the judges suggest. So ,we take the scoring and we get feedback. We got fourth two years ago and we got third last year so our goal is certainly first or second place. The girls got their eye on the prize, they want first.”

The Lady Panthers in the high school’s volleyball program probably had the best season out of any team this year. The ladies went undefeated in league play and they took first place in their league for the third year in a row. The team played in a regional tournament last weekend against Thompson Valley and Golden.

The football team this year was looking promising at one point, and they were in first place in their league mid-season. But then, the team lost to the TCA Titans. After beating Manitou Springs, they then lost to the La Junta Tigers during the last game of the season putting them in third place at the seasons end.

“I know we lost a heartbreaker to La Junta, but we had injuries and ineligibility that sidelined a couple of our dynamic players, so it made it hard,” Cosner said. “But we are proud of the fact that we were throwing freshmen and sophomores in there with some young men almost. And, it was the first time in a long time we went undefeated at home.”

The softball team this year had a decent season, but they did not end up well enough to make the playoffs or rank high in their division. The Lady Panthers ended their 2021 season with an 8-15 overall record and a 4-8 record. They placed fifth place in their league and they ranked 59th in the state in 4A.

The boys’ soccer team also came out and tried hard for the 2021 season, but they fell short when it came to dominating in their league. The boys finished with a 4-10 overall record and a 1-5 league record. The team ended the year in sixth place in their league and they ranked 70th statewide in 4A.

Next Monday, try outs start for all winter sports. Competitions for hockey starts on Dec. 4. Meanwhile, the first wrestling match takes place on Dec. 11, while the first swimming meet is set for Dec. 1; and then girls’ and boys’ basketball matches start on Nov. 30.

For continual sports updates, visit www.mountainjackpot.com or view us on Facebook.