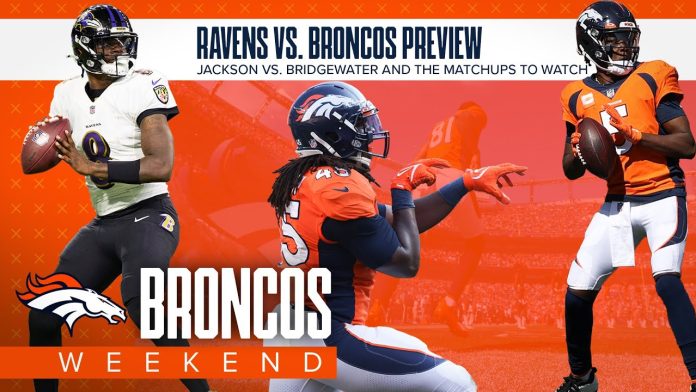 Lamar Jackson and the Baltimore Ravens come into Denver next week to take on the 3-0 Denver Broncos.

The Ravens are one of the teams all the NFL talking heads are predicting to make a Super Bowl run in 2021. As of last week, the Ravens are sitting at second place in the AFC North division behind the Cincinnati Bengals with a 2-1 record.

Raven’s Quarterback Lamar Jackson is one of the NFL’s premier quarterbacks. In 2020, Jackson was named NFL most valuable player by the media who cover the NFL. It was the second year in a row Jackson was honored with this pick.

Jackson has got legs, and he knows how to use them. His forte as a quarterback is ability to scramble outside the pocket and prolong broken plays. He’s so good at running the ball, the Ravens have developed plays centered around his running skill. Raven’s Head Coach Jim Harbaugh is impressed with Jackson’s scrambling prowess. Harbaugh said, “He’s a guy that I’m always very proud of. He’s a guy that can look tough situations squarely in the eye and try to figure out a way to overcome them. He never gets too down about anything.”

Last week, the Ravens had a tough time beating the Detroit Lions 19-17. The Lions are not a high caliber team. While the Ravens did come away with a win last week, they had to work hard for it. The Lions forced Jackson to throw the ball, due to a lack luster running game. Raven’s primary running back, Latavius Murray was held to just 28-yards rushing, and Jackson himself was the leading rusher in that game with 58-yards. Jackson passed 31-times against the Lions for and impressive 287-yards, but also threw one interception.

When Jackson isn’t taking off and running with the ball himself, his favorite target is Wide Receiver, Mark Andrews. Last week, Andrews hauled in five passed from Jackson for 105-yards.

While these stats indicate a dominant performance by the Ravens, it was negated by a tenacious Detroit defense. The Lion defense kept the Ravens out of the end zone save for one possession. The rest of the Raven’s scoring was on the foot of Raven’s Kicker, Justin Tucker. Tucker was 4 of 5 on field goals for the Ravens, accounting for 12 of the Raven’s 19 points, plus one extra point.

Three games into the 2021 season, the Ravens have beaten the Kansas City Chiefs and lost to the Las Vegas Raiders. Both of those teams are tough this year, although the Chiefs have been slip-sliding away from their Super Bowl 2020 dominance. They lost last week to division rival’s, Los Angles Chargers as well as the Ravens in week two of the season.

All the talking heads and NFL experts are looking at the Broncos as an anomaly. OK, the Broncos beat three teams that together have not won a game yet all season. They beat the New York Giants (0-3), the Jacksonville Jaguars (0-3), and the New York Jets (0-3).

Wherein the difference between beating a bunch of scrub teams and being a genuine contender centers around one key statistic: The Bronco defense has allowed the least number of points to an opponent in the NFL to date, with only 26-points allowed.

Last week, the Broncos dismantled the New York Jets, shutting them out 26-0. The Denver defense is for real. They will ask no questions and tell no lies. They just make opposing quarterbacks wish they were someplace else. The Jets game was the Broncos’ home opener and the stadium was sold out with 75,000 fans screaming for their team.

The Ravens have to come here to face the music and the high decibel din of 75,000 half wild Denver fans. Advantage Broncos.

The Broncos main force as an offensive unit is that their opponents don’t know where the ball is going on any given down. A pass? A run? Bridgewater scrambling to extend a play and hit his check down receiver? Keep them guessing. Denver Quarterback, Teddy Bridgewater has yet to throw an interception. Last week he threw 19 of 25 for 235 yards and no touchdowns. He didn’t have to throw touchdowns. Bridgewater connected with eight different receivers who had massive yards after the catch and set up the Broncos on goal-to-go situations on several drives. End game; rush the short yards for TDs.

The bad news heading into this week is, speed goat T.J. Hamler left the game with a knee injury and his status for this week is unknown at this time.

TMJ prediction: Broncos upset the Ravens at home in the last quarter of the game, 28-24.