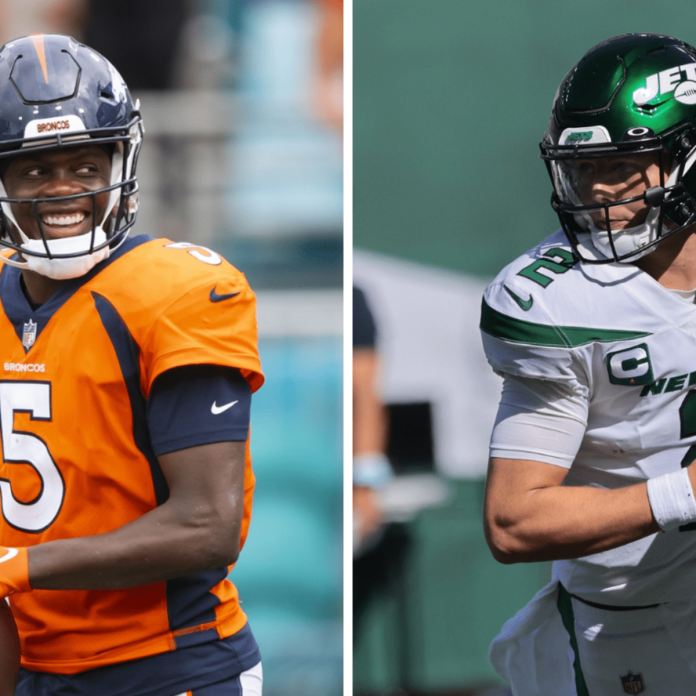 The Denver Broncos have started the 2021 season with a 2-0 sprint after beating the first overall pick in the 2021 draft, Quarterback, Trevor Lawrence and the Jacksonville Jaguars, 23-13 in Jacksonville on Sunday.

The bad news: They won’t advance much in the ever competitive AFC West division. But at least for now, the Broncs are tied for first, and that streak should continue unless they falter big-time.

Next Sunday the Broncos have their first home game against the 0-2 New York Jets. It’s a game that oddsmakers are saying Denver has no chance to lose.  But the Broncos are often bad when put in the favorite position.

The Jets are a pitiful excuse for an NFL football team. They got beat last week by the New England Patriots, who are now without Tom Brady, 25-6. Patriot’s current Quarterback, Mac Jones, and the Patriot defense, held the Jets to an anemic 6-points on two field goals the entire game.

The Jets lost their 10th game by 10-plus points since 2020. Only JAX (11) has more such losses in that span. Jet’s Rookie Quarterback Zack Wilson looked like a deer in the headlights against a middle of the road Patriots defense. He was sacked four times and picked off four times.

Before the beginning of the season Wilson was rated as the number one rookie quarterback ahead of overall first round pick, Trevor Lawrence. So far that hasn’t panned out as an accurate prediction. But hey, those talking heads are the experts. NOT.

It is early in the season and a rookie year can be a real test of a rookie quarterback’s grit. Even hall of famer Peyton Manning had a rough rookie year. He threw 26 touchdowns and 28 interceptions in his rookie year with the Indianapolis Colts.

Wilson did manage to accumulate a respectable 210-yards passing last week, spreading the ball around to seven  different receivers. Rushing the ball, the Jets managed a total of 133-yards utilizing three rushers. Jet’s running back Michael Carter led the Jets rushing attack with 59-yards and a 5.4 yards-per-carry average.

It was the turnovers and sacks that put the deadly nail in the Jet’s coffin last week. Don’t expect it to get any easier for them when they come to Denver next week. Von Miller racked up his third sack in two games for the season last week and he’ll be chomping at the bit to get his hands on another rookie this week.

Last week the Broncos special teams gave up a kickoff return for a touchdown. Historically special teams have been the Bronco’s Achilles heel. They’re going to have to tighten up that part of their game or face serious issues later in the season.

The Bronco offense continues to impress, albeit against some less than impressive teams. But Bronco Quarterback “Steady” Teddy Bridgewater, AKA “Teddy Two Gloves,” continues to prove that the coaching staff made the right decision when they put Bridgewater in the driver’s seat. Last week against the Jags, he passed 26-34 for and 328-yards and two touchdowns, including a 54-yard bomb to Courtland Sutton. That pass set up a 14-touchdown pass to Tim Patrick.

Sutton is picking up the slack left by ace pass catcher Jerry Jeudy when he went down with an ankle injury to the Giants in the first game of the season. Sutton ended the game with an excellent 159-yards, on nine catches. Fortunately, Jeudy will only miss 4-5 weeks before he rejoins the Bronco’s passing attack.

The Broncos once again got off to a slow start on defense last week. The defense gave up a touchdown on the first offensive drive by the Jags, but stiffened up after that. All in all, the defense is on track to be a top-5 defense in the league. After that first miscue, they held the Jags to just two field goals in the fourth quarter. In total the defense held the Jags to just 75-yards rushing, including 21-yards by scrambling Trevor Lawrence. The defense also managed to pick Lawrence off twice in that game.

Look for the Broncs to continue the winning streak with a win against the Jets, at home, next Sunday.