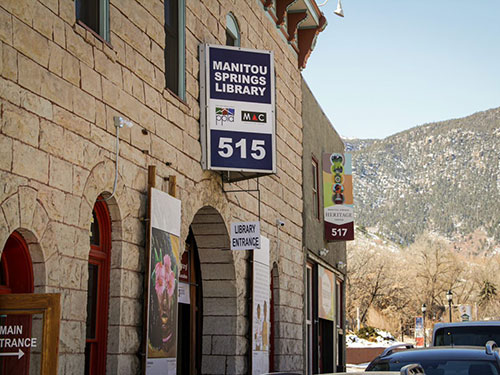 What began two years ago, with a complaint over the lack of accessibility to Manitou Springs’ 1910 Carnegie Library building for people with disabilities, has now expanded into a big issue for local residents not lacking in debate.

This reality was made clear during a recent public forum, held virtually, with about 50 people attending. The ultimate goal is to bring the building into compliance with the 1990 Americans with Disabilities Act.

The expansion project is funded in part by the 2019 voter approved Manitou Arts Culture and Heritage Initiative, which also includes the ongoing demolition of newer portions of Hiawatha Gardens, as well as exhibits at Manitou Arts Center, which has housed the library holdings since earlier this year, the Manitou Heritage Center and Miramont Castle.

During the forum, three proposals were presented for the project. Option 1 would add two stories to the west side of the existing building that would continue the historic design and materials of the building. Option 2 would add a modern element to the west side of the structure that would involve removing part of the hillside next to the existing building. Option 3 is a modern design that would extend from the building’s north side facing the street.

“It’s really important to know that accessibility is more than putting an elevator in the building,” said Eric Grebliunas, senior associate at RATION design firm, who has been hired to lead the project. “It’s making sure that every type of person that you can imagine will have the opportunity to use and enjoy the project.”

The goal of the forum was to receive public feedback on the three options to gather some type of cohesion so the project can move forward.

Public discussion has been heated on local social media and community members have expressed a variety of opinions since the idea for the project, and the development of the Preserve and Renew Our Carnegie Library Taskforce first began in earnest following the announcement of the complaint in 2019.

“All three options are being discussed and we need the community’s help to make sure each of them is the best possible version they can be,” Grebliunus said. “And it may even be possible to add favorite portions of each option into the final plan to satisfy the desires of the community.”

The building itself is owned by the city of Manitou Springs, but it was leased to the Pikes Peak Library District, which owns the assets and the holdings, until the lease was terminated in December 2020, forcing relocation to the hopefully temporary space at Manitou Arts Center farther east down Manitou Avenue.

“Honoring the Carnegie building as a historical structure is crucial to the overall success of this project,” Grebliunas said.

Concerns among the community from the beginning of the project have focused on preserving the trees at the site, the historic wall to the south of the building, the sledding hill and available parking spaces. All those concerns have been considered by the team developing proposals.

Each of the three options will add 3,600 square feet, providing space for bookshelves, staff room, program rooms for children and adults, community meeting rooms, computer labs and restrooms. The building would be compatible in size to the library in Old Colorado City, which is also a Carnegie endowed building.

“Expanding it to this size will not make it huge, by any means,” Pikes Peak Library District CEO John Spears said. “It will still actually be one of the smallest branches in the system.”

“We’re trying to open up the library space to make it as flexible as possible for a broad range of needs, but make sure it’s flexible enough to serve the changing needs of the future,” Grebliunus said. One goal is to remove as little of the existing structure as possible.

According to information provided during the forum, Option 1 is by far the most expensive while Option 2 remains the most economical.

City Council member Judith Chandler is concerned with maintaining as small a footprint as possible with the addition, as well as preserving trees, the wall and the sledding hill.

“This is a really important and tricky conversation to be having,” Grebliunus said, “What is Manitou today? And What does it want to be in the future? The Historic Preservation Commission can really help in that part of the discussion.”

One resident expressed concern that there was a lot of focus on the sledding hill, which has recently caused a safety hazard, as children have gone over the wall and into the street while using it.

“We all have our favorite options and features,” Grebliunus said. “And we are not all going to agree on which one is the best. Our goal is to find the common thread that will allow us to take our favorite parts of each design and come up with something really special in the end that will benefit Manitou for years to come.”