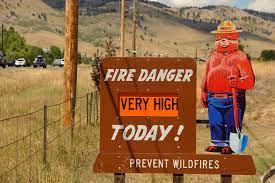 So much for the lingering advantages of a wet and cold spring, as those days have screeched to halt.

As the weather warms up in record fashion and rain seems to avoid the region, area residents, emergency responders and law enforcement officials are getting concerned about the possibility of wildfires igniting this year. While there is no fire ban put in place within the county yet, the conditions have been extremely dry and the fire danger has escalated throughout the Ute Pass/Teller region.

A future symposium on this red hot issue is scheduled for the next two months at the new headquarters of the sheriff’s office in Divide.

All of the discussion/forum participants agreed last week that the current weather conditions are creating scary times for the county. While they agreed that local residents know how to be safe, the biggest problems exist with people coming to visit the area.

“We know that the Western Slope is in a severe drought condition,” Angell said. “We would like to think that over here where we are at that it doesn’t affect us. But the facts are, we are in drought conditions. We don’t have the moisture we have seen in previous years, and yes, we have ‘tinderbox’ conditions. A lot of the residents understand that, it’s the people coming through and staying for camping etcetera that still don’t understand the severity of the conditions of our forest.”

The sheriff said that since Teller County is a recreation hub, visitors pose the biggest threat. “Teller County is 596 square miles but a large percentage of that is National Forest land,” Mikesell explained. “So, what tends to happen is that everybody from everywhere tends to come here to recreate to the tune of over 20,000 people a day. Those people don’t have a buy-in to the community or understand the nature of the fire issues. One of our biggest concerns is that they leave unattended campfires, and we have these types of issues going on constantly.”

Deputy Bunting also said that some problems have come from those visiting vacation rental properties.

“The individuals that are coming out to the community that are renting don’t know the ordinances and rules for the community that they are actually in,” Bunting said. “One big thing we can do is to make sure that those ordinances that the homeowners put out are provided to those visiting our area. Because, they don’t know when we have the fire bans or the proper way to do a fire.”

Even though the area has not seen any major wildfires yet, there have been several close calls recently.

“We have had several cases that had the ability to spread, but fortunately have not gotten away,” Angell said. “But we are seeing it on a regular basis. You can talk to Jay Teague the chief of the Four Mile Fire Department and every Monday and Tuesday; they go out on patrol throughout his entire district. Because, campers leave those fires that they assume are out. But they are not. So, he has taken a very proactive stance.”

The sheriff also said that he will be assigning reserve deputies and members of the Teller County Posse to drive around the National Forest sections of the county to spot fires that are not completely put out.

The sheriff also mentioned that he wants to start up a volunteer organization that will be responsible for watching out for fires and reporting them.

The county has also been putting efforts into helping people fire mitigate their properties. Residents can put their slash piles out on the road and the Teller County Wildfire Council will come out and chip it for free.

The county is also planning on holding two separate wildfire symposiums on July 9 and August 13. The symposiums will be held from 9 a.m. to noon at the sheriff’s office’s new building.

The purpose of the two events is to better educate local residents on what they can do to be prepared for wildfires. There will be a group of panelists present that can answer any questions related to wildfire safety.