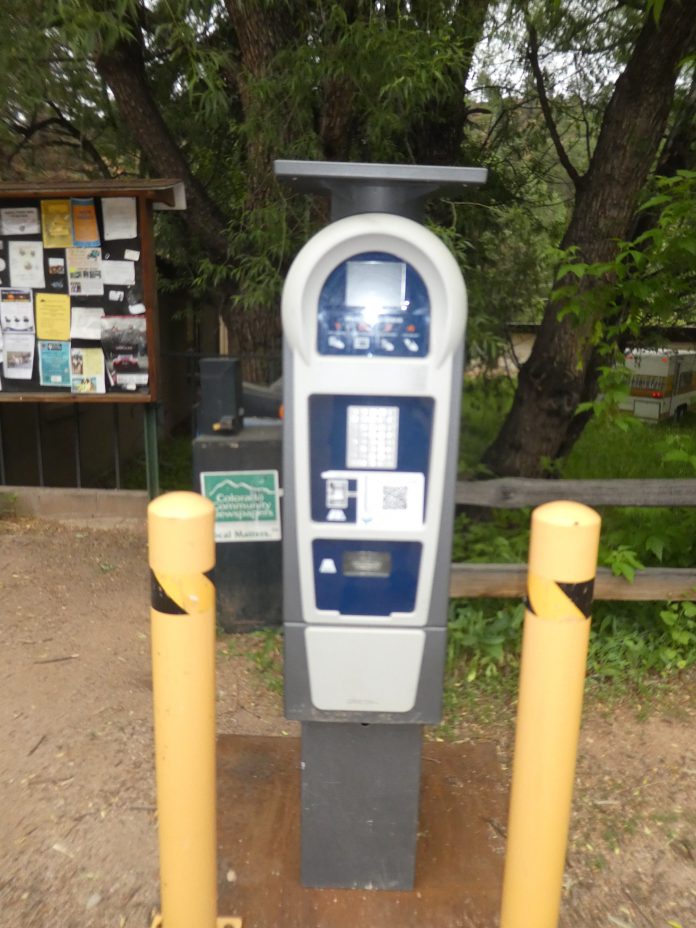 After months of often heated discussions and a slew of allegations and finger-pointing, Green Mountain Falls has become a paid-parking town for hikers, long-time visitors and extended business patrons, at least on the weekends this summer.

Nearly a dozen modern parking kiosk devices and accompanying signs were installed throughout the main core of town last week by the Interstate Parking Company of Colorado, which handles parking arrangements for a number of towns in Colorado, including Breckenridge, Keystone and Idaho Springs.  Interstate got the okay to proceed with the two-year pilot programs for GMF, following a June 1 trustees meeting, with the elected leaders voting 3-1 in favor of the plan and contract.  The cost of the start-up infrastructure is around $200,000 with Interstate footing the entire bill.

Revenues from the parking revenue will be split between Interstate and the town of Green Mountain Falls.

An inaugural question-and-answer forum was recently held at town hall on June 12, allowing residents and property owners to sign up for their free permits. Mayor Jane Newberry and Trustee Margaret Peterson were on hand during the inaugural session, and noted that most of the feedback was fairly positive.

But already, the program has encountered some resistance with the removal of one of the prime parking kiosk devices, located in front of the Gazebo park, prompting a felony investigation and a Crime Stoppers reward fund.  In addition, the early debut of the program, with the kiosk installments, has generated much confusion.

“This seems like a real loser for the town,” said one patron at the  post office Friday evening, who appeared baffled by the large kiosk device.

The apparent theft of the kiosk device at the park has commanded much attention on social media and throughout local conversation circles.

Marshal Virgil Hodges, who has been quite vocal at town meetings about the pros of the paid-parking approach, was outraged over the incident.

“STAY CLASSY GMF!!!!! To disagree with something is absolutely ok and actually an American RIGHT! To commit a crime is a different thing entirely. One of the parking kiosks, valued at $16,000 has been removed from Gazebo ark. I will be placing this theft on Crime Stoppers and a reward will be offered. Please stay tuned for details. Offenders will be prosecuted to the fullest extent of the law,” stated Hodges, in a post on the Green Mountain Falls Politics Facebook page.

His comments were supported by other community leaders.  At most meetings, Hodges has urged residents to give the program a chance, and has classified much of the criticism as nothing more than false rumors and speculation.

Already, Crime Stoppers has issued an $1,000 award for information leading to the “arrest  and conviction of person or persons responsible for a felony theft of a parking kiosk in the town of Green Mountain Falls.” The incident reportedly occurred between 9:45 p.m. June 15 and the morning of June 16, according to Crime Stoppers.

The device wasn’t exactly easy to haul away. It was described as 5-feet tall, and weighing 400 pounds and was attached to a metal bar.  Anyone who has information is advised to call 634-7867 or visit www.crimstop.net.

The reaction to the paid-parking program, and the reported theft, has been mixed. Some have asked on social media why the device wasn’t secured better, and how could anyone who took the machine actually use such a device.

Most shared Hodges’ sentiments of outrage over the theft, even if they disagreed with the paid-parking program.

Questions Raised About Implementation of Program

A number of questions, though, have occurred about the implementation of the program, and when parking violators will get cited.

During the inaugural sign-up session for property owners, both Newberry and Peterson continued to classify the program as a  managed-parking solution, and emphasized that it is a pilot program. Newberry said certain aspects of the plan could be changed, if needed.

According to Interstate representatives, most of the questions at the inaugural gathering at town hall dealt with concerns about illegal parking in residential areas, permits for visiting friends and relatives and sign-up inquiries. Residents, who can park for free under the program, got the opportunity to sign-up in person and were given a quick tutorial on how to use the Interstate site dealing with Green Mountain Falls.  This site is listed as ParkGMF@Interstateparking.com. Residents just have to show proof of residency, via an insurance card or utility bill.

One unique touch at the opening forum involved a protest over the state of local roads.

Wes Simshauser, a long-time resident, stood near the town hall parking lot, holding a hand-made sign, asking for the town manager and  mayor to address the road situation. “I have lived here for 30 years and have never seen the roads this bad,” said Simshauser.

The resident contends that the town needs more staffing to handle road maintenance and should explore the option of paving more areas. Simshauser wants to have an open forum on the town’s road situation.

He said he actually would support the paid-parking program, if it could provide more revenue to tackle the town’s growing road woes.

Other business operators and residents, though, aren’t quite as enthusiastic about the program. They question if town leaders are listening more to certain anti-growth voices in the community, and trying to use the program as a way to turn people away from Green Mountain Falls. They question why the town is proceeding with the program, when most people at public meetings, opposed the plan.

Opposing comments, mixed opinions, stolen devices or whatever, paid-parking in GMF will make a debut this summer.