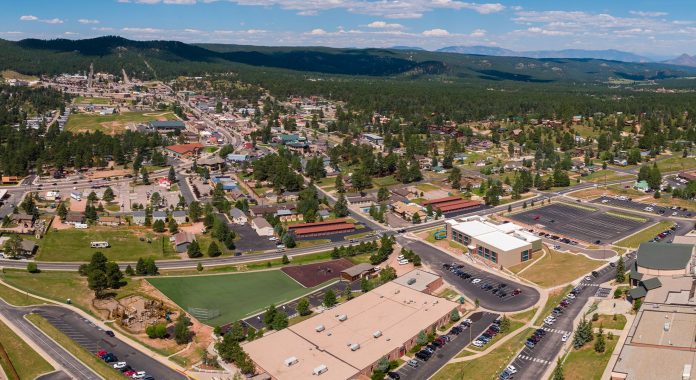 The “City Above The Clouds” has experienced its share of ups and downs throughout its history, but the town that was once boomed as a tourist destination and cowboy/rodeo hub, is now facing serious growing pains.

In addition, the plight of local workers in trying to find an affordable place to live is becoming next to impossible.

Woodland Park was first called Manitou Park when it was founded in 1887 before it was officially incorporated and named Woodland Park in 1891. The name Woodland Park came from the abundance of trees that grew in the area, and spawned a booming lumber industry.

The town supplied much of the timber that was used as railroad ties and mine shaft shoring in its early heyday. Five sawmills in and around Woodland Park produced tons of lumber and railroad ties for use in Colorado Springs and other cities and in Colorado’s mines and railroads. It was common to see large stacks of lumber piled throughout the center of town waiting for shipment on the train.

As the town grew and the Midland Railroad made its way up the Pass, the town became a haven for tourists who came to enjoy the scenery and the cowboy way of life. During the 1890s when thousands of people migrated to Cripple Creek to join the gold rush, the trains and stagecoaches brought a tremendous amount of commerce through the growing town. Several hotels in Woodland Park accommodated tourists and other travelers. The 15-room Crest Hotel was the first hotel in town. It operated from 1889 until it was torn down in 1910.

Cattle ranching, rodeo, and later dude ranches were also part of the local scene. Pioneer rancher Lewis Spielman and others organized the Woodland Park Rodeo Association around 1920. Events in 1922 included baseball, a parade, a rodeo, and dancing in the pavilion by the lake. The rodeo was discontinued after a few years but started again in the 1940s as the Ute Trail Stampede, which was held for three days every summer. In 1949, the rodeo was moved from the grandstand by the lake in Memorial Park to Bergstrom Arena in the middle of town south of U.S. Highway 24. The rodeo eventually ended, and the old Bergstrom Arena and Woodland Park Saddle Club were torn down in 2008.

Today, Woodland Park is predominantly a bedroom and retirement community. Many of the residents who still work commute daily to jobs in Colorado Springs. However, the high cost and difficulty finding affordable housing has left many who wish to own a home out in the cold.

Housing working families is one of the town’s greatest challenges. In 2014, Trail Ridge apartments was built. The buildings have a total of 168 units. A two-bedroom 1,010 square foot now rents for approximately $1,716.

Attempts at constructing multi-family housing have met with some success, but affordable alternative dwellings, such as tiny homes have faced severe opposition by residents. City council recently approved a multi-family complex across highway 24 from the Trail Ridge apartments. This same development was first proposed as a tiny home development, but was killed when an outpouring of opposition from citizens forced the developer to withdraw the project.

Just last month, council also approved a rezoning of a 1.71-acre parcel on Spruce Haven Drive from community commercial to multi-family for the purpose of building an apartment complex.

The availability of water is the ultimate decider on a community’s growth. According to Woodland Park Planning Director Sally Riley, the city imposes limits on water taps offered each year. In 2021 the city allocated 72 water taps and ratchets this number down each year.

“Also, city council reviews multifamily tap allocations from the multifamily tap bank which are approved sporadically. Based upon the City’s limited water resources, the maximum number of units (single and multifamily) to build-out is 1,100 units.” said Riley.

When asked how long it will take before the city reaches its total build out, Riley replied, “This is very hard to predict because growth is dependent upon the housing market which as you know can fluctuate depending upon the economy, interest rates and availability of residential lots. So, if we estimate an average of 40 units per year then build-out will be in 2050. This is a very rough estimate because we don’t have a crystal ball looking into the housing market with all its many variables.”