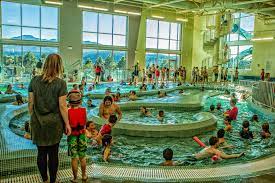 After suffering from closure due to pandemic restrictions, the Woodland Aquatic Center is back on track and is fully open offering both reservation and open swim times.

The center is also back to offering all of their classes and event options for both locals and out-of-towners.

During 2020, the pool was closed for much of the year, and then once they re-opened, they were reservation only and strictly limited as to what they could offer. During the first quarter of 2021, patrons have the option to enjoy open-swimming and reservation times, but it is not quite operating at the capacity it was before the pandemic struck.

During last week’s Woodland Park City Council meeting, Woodland Park Parks and Recreation Director Cindy Keating gave an update to the panel on how the first quarter of the year has gone for the aquatic center. She started by describing the facility’s reduced and somewhat complicated schedule, and then compared how the aquatic center was doing financially compared to past years.

“Our hours of operation have changed significantly from the day we opened in 2017, we operated at 90 and a half hours per week with over 40 employees from October 2017 to March 2020,” Keating said. “Since our reopening in June of 2020, we have been operating with limited hours, operations and staff. We currently operate with 58 hours per week with 13 employees. That is a 36 percent decrease in hours of operation and 32 percent less in employees.”

“The use of the reservation system and the doors remaining locked, along with the scheduled open swim times, allows us to keep our staffing at a minimum,” the parks and rec director continued. “When the doors are unlocked, which is during the open swim times, our lifeguards work the front desk as a part of their rotation.”

Keating then showed a graph of revenues versus expenses from the first quarter since 2018. In the aquatic center’s first year, it generated revenue that equated to 69 percent of what it paid in expenses.

In 2020, the pool complex only produced 35 percent of what the city paid for its upkeep. However, this year Keating applauded the fact that during the first quarter of 2021, the center is already up to covering 56 percent of the costs it takes to operate.

The deficit gap has been one of the big areas of contention regarding the aquatic center, with a few council members questioning expenses far exceeding revenue.  But on the flip side, few city/community aquatic centers are self-supporting.

According to Keating, there have been a few complaints about the pools not being opened up enough now that COVID-19 restrictions have ended. “Our lap swimmers have been very patient with the reservation process, because they were really just happy to be swimming again and having our doors open again,” Keating explained. “But, now that we are in the recovery mode of COVID-19, and things are opening up more, they are looking for us to open up more for them.”

“They would like to see that reservation process go away,” she said further. “And, they would like to see their lap times extended a little bit more. And, we have been considering and discussing those changes. But we recently received our aquatic center manager’s resignation. So, I have kind of put a hold on that and I am hopefully waiting for a new aquatic manager to come in and make those decisions.”

She went on to say that the aquatic center no longer has any restrictions in place as far as COVID-19 polices go. She said that all of their facility is open 100 percent and that all they ask is that their customers attempt to keep a six-foot distance from other patrons.