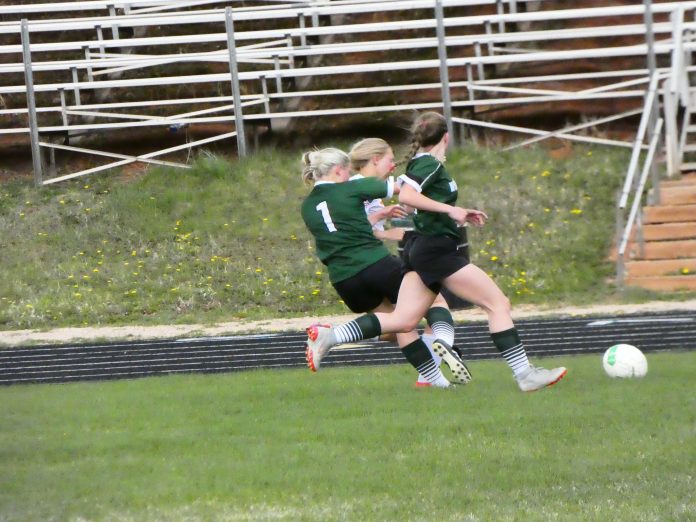 The Lady Panther kickers are enjoying the best start in several years.

The ladies’ soccer team has looked quite impressive in the spring of 2021, as they won their first two games, and now they are focused on remaining victorious.

During their season opener on May 5, the girls beat Buena Vista 3-2. Then on May 13, Woodland Park won a big road game when they shut out Harrison 10-0.

“We are off to a tremendous start this year,” Smith said last Friday. “We have a really young team, but they are very, very talented. And other than that, they are just eager to learn. Right now, we are undefeated after playing just two games, but both JV and varsity have won all of their games. It is one of the best starts that we have had in a very long time.”

Smith said that even though the team is young there are several freshman and sophomore players that are proving to be top-notch. She said that she has some of the most talented freshman the team has seen and that many of them have been playing defense on the team which is a hard position to learn.

Smith is also impressed by the girls’ teamwork. “We have very young girls but they are just so solid in their tactics and their skills that they are just picking things right up,” Smith explained. “And our upperclassmen (juniors and seniors), which we don’t have tons of, are so accepting of the younger girls. which has made it a great cohesive team. There is not a lot of ‘rank,’ they are just one big united team.”

However, even though the girls have seen success, they still are focused on playing one game at a time. The players are taught by their coach to play each game like it is going to be their hardest.

Smith did say that there were some aspects of game play that the Lady Panthers could work on. “We want to improve always on our possession game,” Smith stated. “I think that is a key to any successful team. Just keeping the ball at our feet and not our opponents is probably the thing that we are always trying to improve on.”

So far, Smith said that she has been impressed by several players, but that two sisters, senior Avery and sophomore Shea Waters along with their friend junior Morgan Berry, have stood out above the rest. “When you watch them play it’s beautiful, they are just amazing soccer players,” Smith said.

So far, Berry leads the team in stats with four goals out of 17 shots. The Waters sisters and Makayla Newcom are right behind her with two goals scored apiece.

This Tuesday, the Lady Panthers take on the 2-2 Mesa Ridge Grizzlies on the road. Then on Thursday, they come back home to challenge the 0-3 Widefield Gladiators.