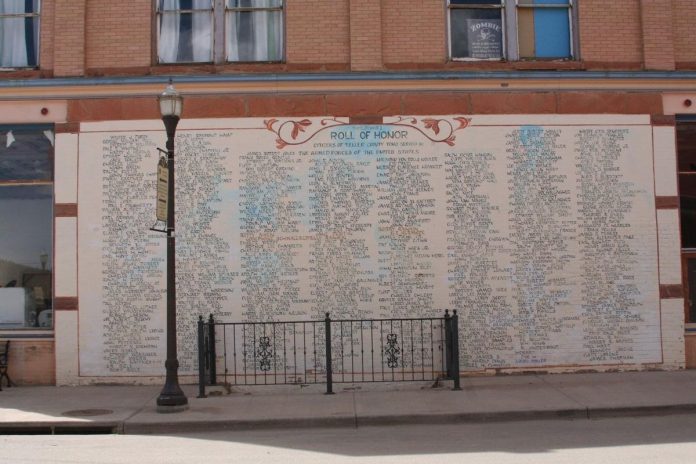 The city of Woodland Park has matched Cripple Creek in deciding to allocate $2,500 for a World War II Memorial Roll Of Honor, proposed by a group of Teller residents.

The Memorial, which has been the subject of  much discussion in recent weeks, is being established in Victor.

But the WP  council decision wasn’t easy and occurred during a recent meeting following a close 3-2 vote.

In the past, funding volunteer and non-profit organizations was done through a provision in the budget, but the council eliminated that funding item in its most recent annual fiscal blueprint. The reasoning behind axing the funding of this community investment fund was that the council believed it is not the government’s role to fund non-profit entities and those doing specific causes. However, on several occasions, council has allocated funds to these causes in the form of spending for police support, and various incidental expenses incurred during certain events.

This subject, however, has been a big topic of debate by several city council groups over the last 15 years.

The World War II Memorial Roll of Honor is a project in Victor that will replace a memorial listing the names of Teller County veterans who served in World War II. It was painted on the side of the Monarch Block at the corner of Third Street and Victor Avenue in Victor. The original was a fixture in Victor for 77-years and was recently painted over.

The new memorial will be located in Wallace Park at the corner of Second Street and Victor Avenue in Victor. The cities of Victor and Cripple Creek both donated to the project. Cripple Creek donated $2,500 and Victor $1,000.

The debate over whether or not to donate funds to the World War II Memorial Roll of Honor brought back the same argument that eliminated the funding for such groups. Oddly enough, the fight over this issue came right after the council appeared to heavily support the Salute to American Veterans Rally, with the entire council endorsing this forthcoming event in August. For the first time in nearly several decades, Woodland Park will emerge as the main host city for this rally.

Councilman Robert Zuluaga and Councilwoman Stephanie Alfieri both argued that the city should  not fund the World War II Memorial project. Alfieri began the debate lauding the project, but regurgitated her distaste for funding non-profits with taxpayer money. She did urge private citizens to donate, however.

Zuluaga echoed Alfieri’s sentiments. He too applauded the project, but he considers, “Getting the city out of debt” is more important.

Mayor Pro Tem Hilary LaBarre noted that the money could easily come from the $17,000 that is already in the budget for discretionary council spending. She suggested the council approve $1,000 for the project.

Debate raged back and forth with the same arguments occurring.  Finally, Councilwoman Kellie Case made a motion to allocate $2,500 to the project. A vote was taken and the motion passed 3-2. Both Zuluaga and Alfieri voted no.

The WP council also recently engaged in a hefty debate recently involving a public hearing for approving ordinance 1396. This ordinance was a rezoning request by HopTree Development, LLC to rezone from community commercial to multi-family residential suburban. This dealt with approximately 1.71 acres of land at 920 Spruce Haven Drive.

City Planner Lor Peligrino gave a detailed presentation on the project  and recommended approving the rezoning.

When council began discussion on the issue, Zuluaga expressed concerns on parts of the staff report that referred to the city’s comprehensive plan, often referred to as the master plan.  Zuluaga has a history of opposing the city’s master plan effort, suggesting such a document clashes with property rights.  He complained that the plan is not a legal binding document and that too much weight is given to the plan when property rights and development are considered by the council. Specifically, Zuluaga had a problem with the plan being mentioned in Peligrino’s presentation several times.

The mayor pro tem stressed that the project is good for the community, and thus meets with the desires that the community established in the comprehensive plan. She went on, “Ultimately what we are looking at today though is, it is currently zoned community commercial and would we like to change the zoning to multi-family residential.”

Zuluaga responded that he objects to the idea that, “Making the comprehensive plan the criteria for us establishing an ordinance.” LaBarre, though, noted that property owners’ rights to develop must fit in with zoning regulations.

Case chimed in, in regard to the comprehensive plan, saying, “They’re just tools that we use to check ourselves that we’re headed in the right direction and there’s many of them.”

In the end, the council  agreed to strike the reference to the comprehensive plan in Peligrino’s staff report. But ultimately,  the zoning change for the project was also approved unanimously.