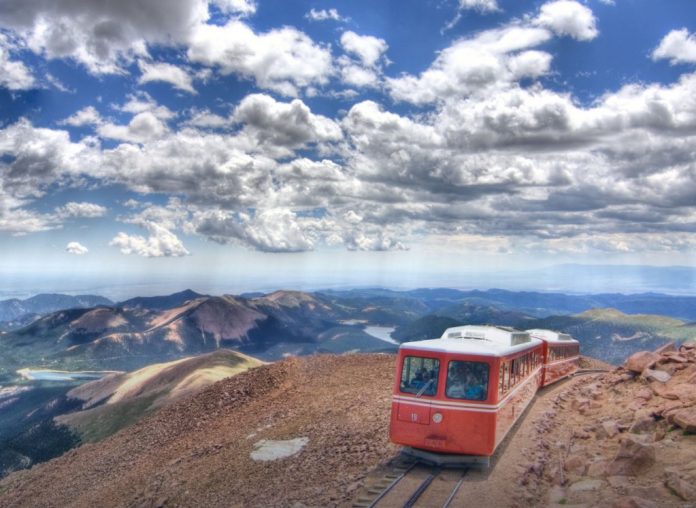 One of the region’s most popular tourist attractions, the Pikes Peak Cog Railway, is on track to reopen in May following years of work on the infrastructure and the cars, which have been arriving over the past few weeks.

The remainder of the cars, meanwhile, have undergone new paint jobs while the train depot has experienced renovations. A new walkway has also been constructed over the tracks.

Gary Pierson, Chairman and CEO of the Broadmoor-Sea Island Company, which owns the Cog as part of the vast holdings of billionaire Philip Anschutz, said the Cog has made every effort over the past few years to be a good neighbor.

The Cog, officially known as the Broadmoor, Manitou and Pikes Peak Cog Railway, began operations in 1889, but was closed in 2017 for maintenance. In 2018, management announced the railroad would close indefinitely while a feasibility study was conducted, which spelled doom for the Manitou economy The city of Manitou Springs has relied on the railroad for a huge part of its business since its founding.

In preparation for the reopening, the owners have spent over $4 million to help solve traffic issues that have traditionally been created by the railroad by people traveling through downtown Manitou Springs and along Ruxton Avenue.

Visitors are being encouraged to purchase tickets online and provide a cell phone number so staff members can update them on traffic and parking issues prior to their visit.

“We are pushing electronic ticketing as hard as we can,” Pierson said. “Tickets can be purchased on the Website through any electronic device. Those who buy tickets online as opposed to buying at the station will receive a discount.”

Pierson said that will make it easy on people who might show up in person, drive around looking for a parking space or blocking traffic on Ruxton Avenue to ask about the availability of seats, especially on a busy summer weekend, like July 4.

“Then multiply that by 100 times and you will understand how the system used to work in the past,” Pierson said. “With information on the Website, we are going to tell them that cannot be done. Those days are long gone.”

Even with the system in place to purchase tickets on line will have a certain set of rules to follow, he added.

One previous visitor habit that will no longer be allowed is showing up more than 30 minutes prior to the departure time for the train. Staff members will help direct traffic along Ruxton Avenue and around the parking lots, which are being expanded. Three automated gates will provide entry, depending on the sizer of the vehicles.

He added that the shuttles will loop through a parking lot so passengers can disembark near the station at a new mobility hub that will also include racks for bicycles. The management is also working on a system that will enable residents along Ruxton Avenue and nearby streets to get easier access to their homes without being tied up in traffic to and from the railroad on a daily basis.

Part of the new infrastructure that has been created for the railroad includes additional restrooms, a walkway over the tracks, a second gift shop and a second track near the station to help disperse foot traffic at the site.

Additional siding that was added to the tracks will allow a train heading down the mountain to move out of the way of trains going in the opposite direction. Automatic switches have been added so conductors do not have to get out and manually switch the tracks, as was done previously, thus saving time on the journey.

“This is an entirely unique project,” Pierson said. “Think about what we are doing here. We are building a railroad and railroads typically travel on flat surfaces. And most cannot travel at more than a 4 percent grade because they lose traction. We are going up a 14,000-foot mountain with a track built 130 years ago with pickaxes and donkeys.”

The new train cars from the Swiss Locomotive and Machine Works have the most fuel-efficient carbon-emission engines currently available, he added.

“Yes, there will still be a problem with pollution, but it will not be as bad as it was before,” Pierson said. “We did everything we could to lower emissions from what we had in the past. This is like a Ferrari versus a Model T. Many of the newer engines were built in the 1950s and the technology has greatly improved since then.”

One new feature is a 26-ton snowblower with 14-foot blades that spread out 20 feet from the train to make clearing the tracks more efficient in the winter, at a cost of about $100 million.