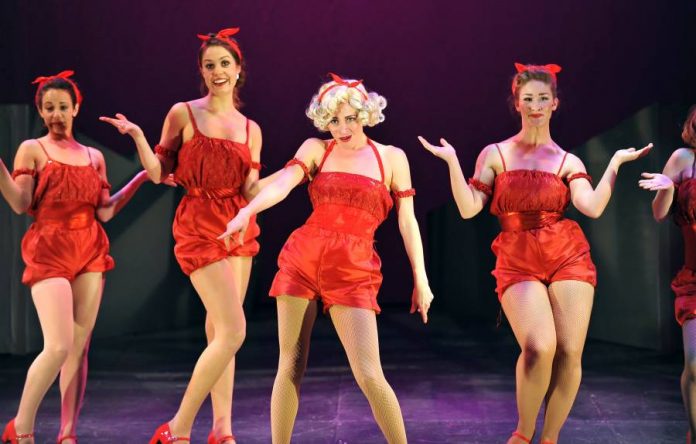 Cripple Creek’s theatrical sabbatical is over.

The Butte  Theater, which has put the town on the regional and state entertainment map in a major way, is slated to reopen for live shows, and will showcase five major productions in 2021.

These include their traditional lineup of shows, including a melodrama, musical, late summer, Halloween and Christmas performances. Plus, they will host community shows, funded by Newmont Cripple Creek and Victor Mine.

But with the COVID-19 epidemic still persisting throughout the county and especially southern Teller, the theater will only permit about 50 attendees per-show and will only perform one-show per day and not two.  However, performances will occur one more day during the prime theater season, with a Tuesday through Sunday schedule.

“We are happy to be open,” said Butte Theater Manager Mel Moser,  a mainstay of local theatrical operations for more than two decades.

Last week, the Cripple Creek City Council gave the green light for annual contract between the city and the Thin Air Theatre Company, which will put on the bulk of the shows.

In a brief presentation before the council, Moser said the Butte is operating like most theater companies in the country, in an effort to open their doors gradually. He hopes that when the theater goes into a full stride mode in mid-June, the pandemic scare won’t be as strong with more people getting vaccinated.

The proposed list of shows includes Under the Colorado Moon (a melodrama), Gentleman Prefer Blondes (a musical), I Ought To Be In Pictures (late summer production), Haunting at the Old Homestead (a Halloween production), a Christmas show and a one-night fund-raising cabaret.  Moser said nearly all of the shows will try to highlight a strong, local historic element. For example, he said their melodrama show features a more localized version of the classic melodrama, Under Two Flags, which was a big hit in the early days, when melodramas occurred at the old Imperial.

The production cost for the city for 2021 is listed at $260,000, money that will be dispersed throughout the year. That was one major change in the contract, compared to previous years.

The city made a big change at the end of 2019, when it decided to return with the Thin Air Theatre Company, and ended its arrangement with the Butte Theater Foundation.  The Thin Air did shows at the Butte for 10 years.

But with the pandemic, no shows occurred for the 2020 season. In fact, virtually every theatrical stage was shut down across the country, with some opting for virtual performances.

The council approved the contract with at last week’s meeting with little delay.  The only question mark, posed by Mayor Pro Tem Tom Litherland, dealt with the marketing of the shows.

That is a subject that Moser agreed to address in the next several weeks, as he finalizes their ticketing system for 2021.

The reopening of the Butte marks the first signs of semi-normality for the city since the pandemic struck last March. The absence of stage action was cited as a major downer for area residents, based on the conclusions of the annual Best Of 2021 survey, sponsored by TMJ News. For the first time in years, the Butte Theater wasn’t chosen as the area’s Best Entertainment.

Even with the reopening of the Butte, the city still has no plans to fund any special events, other than their July 4th celebration.  It is keeping its doors open for the possibility of events to occur this year, but not as a sponsor.  Several nonprofits, such as Two Mile High Club, are still progressing with plans to have their traditional festivals, but on a more scaled-down version and with outside funding.

The Salute to American Veterans Rally will conduct their annual event in Teller County, but the major ceremony probably won’t occur in Cripple Creek.

In other action, the council okayed several key contracts, including one for a consultant planning study for a future streetcar trolley system. This has been a dream for many former community leaders for years.  Now, federal and state funding for alternative transportation pursuits could make the plan a reality in the distant future.

On the downside, the Cripple Creek City Council didn’t get a glowing report about the current COVID situation.  City Finance Director Paul Harris, who serves on the county-wide coronavirus task force, reported a 40 percent hike in cases for the month of March for the Cripple Creek area, with nearly 30 positive inflictions.  The area, once practically immune from COVID-19 activity, is finally getting hit, noted Cripple Creek Interim Administrator Ray White.

As a result of a big spike in cases, both Harris and White noted that Teller County has returned to a Yellow rating, which equates to one of concern  White said the city is going to further review its COVID protocol. Harris even went further and said that in one area of classification, the rate of positivity among those tested, Teller was hitting the Red zone.

Teller officials, though, said this rise in cases, is part of a state and national trend.  Luckily, the far majority of those getting inflicted are not part of the at-risk population. On the upside, a lot more people are getting vaccinated locally (see related story).