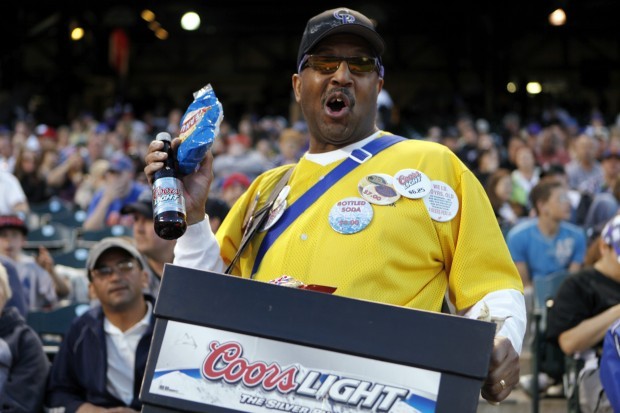 Live baseball is back at Coors Field, but enjoy your beer, peanuts, the warm Colorado sun and the great views.

Don’t make any wagers on the  Colorado Rockies this season, touted as big rebuilding  time for the Nolon Arenado-less team, regardless what the management claims.

You trade your top player, get no would-be stars in return, and try to make out with the lowest annual payroll in years. Sounds like the recipe for another failed Rocky disaster story.

Then, start your season out with a four-game series against the world champion L.A. Dodgers, predicted to win the championship  title again this year. Ouch, as sports columnist Woody Paige was even ready to wave the surrender flag, predicting that the Rocks may not win over 60 games this year. Some comparisons have  even been made to Pickett’s charge in the famed Gettysburg battle, with the Rocks playing the role as the defeated Confederate army on the pivotal day of the fight that determined the Civil War.

On the upside, the Rocks look great in their opener, de-throning King Clayton (Kershaw), in an 8-5 thriller, with a nearly four-hour duel and close to 30 combined hits between both teams. A typical game at hitter and home run-friendly Coors Field.

Yes, the pitching loss couldn’t happen to a nicer guy (not), in whipping the cocky and arrogant King Clayton, who looked anything but sharp. The old Clayton Kershaw fastball just isn’t what it used to be.

I can remember seeing Clayton several years ago during a July 4th sellout outing at Coors, when he massacred the Rockies, yielding a mere two hits for nearly nine innings.  If you hit the beer stand early in the game, you missed the only base runners the Rockies produced  for the entire game. Scary.

Don’t get me wrong; Clayton won’t win any awards for grace. With Kershaw, you get the combination of the ugly golf swings of Trevor Phipps, Charlie  Chambers and Greg Couch combined, but with  solid winning results.  Kershaw exhibits crazy form, almost evoking memories of Sandy Koufax.

Opening day was great and the kind of wins the Rockies are going to have to achieve this year, with timely hitting, strategic base stealing, opponent errors and home field hysteria.  With coronavirus restrictions, Coors Field can handle 21,000 fans per game; and needless to say, every available seat was filled for opening day and throughout the Dodger series.

Masks are required for all attendees at Coors, unless you are heartily drinking beer and munching on refreshments. You are going to have to indulge in all of the above to keep your wits about you; and not to get your heart broken on the baseball diamond. The Rocks, described as a good young team with a chip on their shoulder, are going nowhere in 2021.  No one is debating that basic state of reality.  So, have a good time at Coors or in viewing the Rocks at your favorite sports or home bar; see some new ball players you have never witnessed before; and display plenty of patience.

The Rocks still sport great crowd favorites with the likes of Charlie Blackmon and Trevor Story.  Myself, I  really like the speed and enthusiasm of outfielder Raimel Tapia, who made some courageous attempts at stealing home runs from the Dodgers in the first couple of games.

And if you miss Nolon (Arenado), you can take pride in the talent of his cousin, Josh Fuentes, who appears set to emerge as the starting third baseman.

Starting pitching is one of the team’s highlights, but Kyle Freeland, the favorite local Denver boy, who resurrected is career last year, is out for a spell. And starter Jon Gray still battles occasional health ailments.

He was sidelined in game three due to cramps after nearly six solid innings.  His injury really took the bite out of the team’s momentum, and lead to their loss in game three, when L.A.  won in a come from behind victory. It  was a real bummer, but no big surprise, as the Dodgers are just one great baseball team.

Gray actually looks somewhat respectful this year, and is giving up his rock star appearance. In the past, Jon almost resembled a reject from the Woodstock festival, who got lost, until he hit the pitching mound. Gray has a menacing fastball and has added a tricky slider to his recipe.

The relief pitching is still quite rocky, with Colorado not really set on a closer. Their relievers completely choked, following Gray’s injury Saturday evening, with 14 LA base runners on board in a four-inning stretch.

The team, though, showed it has a mean streak, with their opening day victory and resilience in games two and three, despite falling to the Dodgers. In game two, they rallied from a 10-0 deficit to that of giving the Dodgers a real run for their money.

The consecutive losses against LA weren’t unusual, as the Rockies’ record with the Dodgers is pretty much a disaster.

The opening series, if anything, wasn’t uneventful, with a wild bobcat running amok on the field, an inside the park home run, bizarre wall crashes, wild pitches by both sides and plenty of hits and miscues.

The Rockies definitely need to tune up their relief work, or they must prepare for a long season. The hitting won’t mimic past slugger years, but they displayed some definite power in the first few games.

On the downside, the Rockies are part of the same  division as the Evil Empire, the L.A. Dodgers.  The National League West is not longer the Mild West. It probably ranks as one of the toughest divisions in professional baseball.