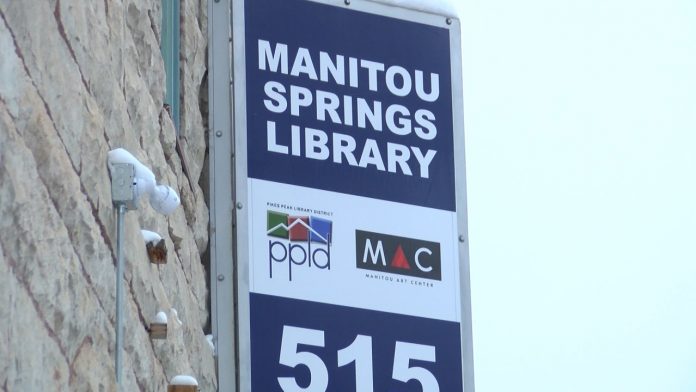 Following weeks of packing and unpacking and months of preparation, Manitou Springs Library is settling in at the temporary location inside the Manitou Arts Center.

The initial response has been overwhelming, as residents eagerly seek out the services once enjoyed over a year ago at the historic Carnegie building, now shuttered as renovations and an expansion begin.

Throughout the years, the buildings at 513 and 515 Manitou Avenue have served multiple purposes. For the past 30 years, the buildings have housed Manitou Arts Center and Manitou Heritage Center. Prior to that they served as a bowling alley, livery stables and a city garage. Then, the space served as offices, a coffee shop and cafe and a children’s learning center, since shuttered as a result of Covid-19. The venue once served as a place for wedding receptions and concerts.

Now, 515 Manitou Avenue, the area that once housed a coffee shop, serves as the main reception area for Pikes Peak Library District’s Manitou Springs Library Branch, which officially opened earlier this month. Walls were removed and added and space was repurposed to make room for the library’s collection.

The city of Manitou Springs owns the Carnegie building at 701 Manitou Ave, which has housed the library since 1910 and is in the process of getting renovations done to comply with the Americans with Disabilities Act following a lawsuit regarding lack of access to clients in wheelchairs.

“We have been very committed to maintaining a presence in Manitou Springs regardless of what eventually happens with the Carnegie building,” John Spears, chief librarian with Pikes Peak Library District, said. “We do know that the building will be rebuilt and remodeled and it will be beautiful.”

Spears said it can be confusing to patrons when they say library in Manitou, because it is unclear whether they are referring to the building, the collection, the services of the organization, because they are three different entities.

“And we are committed to all of it,” Spears said.

Prior to the official opening, Spears and Natalie Johnson, executive director of Manitou Arts Center, conducted a series of tours to show people what was taking place and how things had been transformed to make way for the library. Many tour-goers had never even been inside the arts center.

“The reaction was priceless, “Johnson said. “During the tours, people would pull us aside and discuss the project in meaningful ways and some even commented that something good could come out of the pandemic.”

“I want to commend everyone involved in this project and brought everything together,” Dora Gonzales, secretary of Pikes Peak Library District’s Board of Trustees, said. “It is so amazing. I think the vision that everyone has and the creativity hat came together is astounding. It is one of the things I have always loved about Manitou.”

What the Temporary Library Provides

The library is spread between both buildings. In the 515 building, the circulation desk welcomes patrons. There is also a section for DVDs and a section for free stuff for children. A self- checkout kiosk, and shelves full of teenage reading material, also is featured at the temporary library site.  In the future there will be copy machines available for use as well. There will soon be an area housing children’s reading materials and Spears hopes to fill it with hanging mobiles and toys, once it becomes appropriate to bring them back to the space. The rest of the space is filled with books.

Next door, in the First Amendment Gallery, there are rolling bookshelves filled with adult fiction that can be moved to accommodate events and large sculptures created by local artists, as the space will still be used as an art gallery.

“The gallery’s name just resonates with artists and libraries in a meaningful way,” Spears said. “This is another one of those spaces that, although is definitely an art space, has been incorporated into the library in a very meaningful way.”

The space is open enough for people with disabilities to easily access the services, as part of the original ramp remains at 515 and there is a well-marked wheelchair entrance at 513. There is also an elevator in the foyer that allows access to the second floor of the building.

The current operating hours are Monday to Thursday from 10 a.m. to 6 p.m., and Fridays and Saturdays  from 10 a.m. to 5 p.m. The library is closed on Sunday. It will stay open later during art events on the first Fridays of the month. Services are available to any resident of El Paso County with a library card.