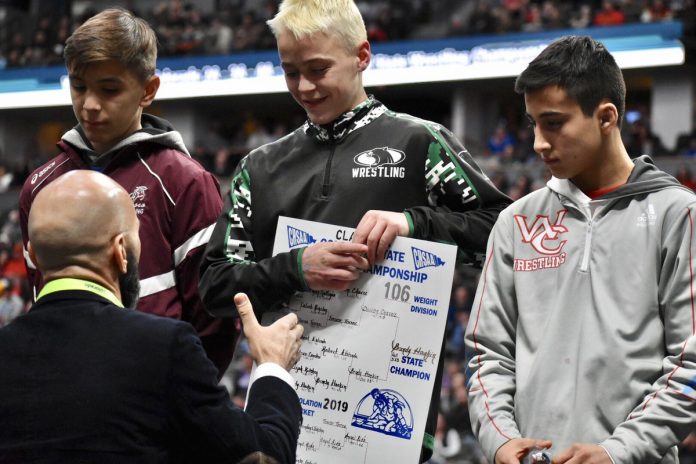 After winning three matches in the tournament, Hankin clinched the title in the 138-pound weight class. This is a much higher and competitive weight class than when he first started grappling for WP as a freshman.

Only this time, Hankin was seriously challenged in the semi-finals, but prevailed in sudden death in a tough match.

Hankin started the tournament off with a bang when he beat his opponent by in less than three minutes. But then during the semifinals, Hankin had a tougher match against Zach Brown from Valley.

Brown came into the tournament with only one loss, which occurred against Hankin earlier in the season. The two fought hard and Brown tied the match after earning a two-point takedown with three seconds left in the match.

The takedown in the final seconds tied the match 3-3 and sent it into overtime. Hankin then scored a two-point takedown early in sudden death overtime to get the win.

The final match was somewhat uneventful, as  Hankin took on Jamen Onesky from Faith Christian. The bout ended in about a minute and a half when Hankin pinned Onesky. After his victory, Hankin held three fingers up to the crowd signifying his third title.

As for now, Hankin is looking forward to winning his fourth championship his senior year.  This is a rare feat, as only a dozen people in state history have ever won a state title all four years of their high school career.  According to some reports, Hankin may have Olympic aspirations, especially if  his amazing success on the mat continues.

According to team coach and Brady’s father, Casey Hankin, Brady is planning on taking about two weeks off from training. After a short break, Brady Hankin will go back to the mats to train for next year.

Hankin was the only Woodland Park wrestler to qualify for the state championship this year due to changes in how the playoff spots were picked. Junior wrestler Adam Garner was a runner-up at the regionals, but he failed to earn a spot at the state tournament when he lost a match to determine second place. Garner ended up getting third in regionals.

According to the coach, in a normal season Adam and his twin brother Eli Garner would have qualified for the state tournament. “It was a rough season that’s all,” Coach Hankin said. “The Garner brothers looked great and they wrestled great. In my opinion they should have been qualifiers, but due to COVID it just didn’t happen. I think that had they been able to go, I think they had a good chance of getting up on the podium. We are just gunning for next year and I think they are going to be great.”