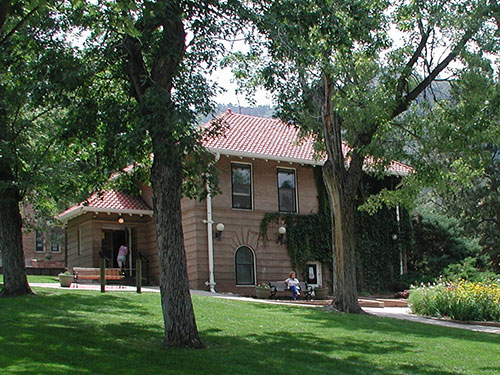 The task seems daunting: Pack up everything at the current Manitou Library and move it down the street to Manitou Arts Center.

That includes nearly 5,000 items and packing them carefully. It is a task Whitney Springer, manager of Manitou Springs and Ute Pass Library, and her staff have been preparing for since late last year when the city council cancelled Pikes Peak Library District’s lease of the Carnegie Library Building at the end of 2020.

The move will also help staff members see what items need to be refreshed, such as toys and genres, so new resources will become available to patrons once the library reopens, according to Springer.

“Shelves have been condensed so we can better calculate the number of items that will move and the shelf space we have available to allocate for the new materials,” she said.

The grand opening of the library at the new location at Manitou Arts Center is set for Friday, March 5, which can vary depending on Covid-19 restrictions, according to Natalie Johnson, Executive director of Manitou Arts center.

The process has taken awhile, she added. Conversations began as early as March 2020. After that the process involved leases, a memoranda-of-understanding, operation agreements, architects, lawyers, inspectors, regional building, planning department meetings and lots of other things, Johnson said.

Since Manitou Arts Center has been closed because of the pandemic, workers have wired the building for high-speed Internet and removed the cafe area in the foyer, which will house the non-fiction collection, historic Manitou Springs collection and patron holds.

The ramp will be covered with a deck and the hallway space will have shelves for new books, rapid reads, DVDs and books for young adults, teens and older children. Farther down the hall will be a room for children with board books, toys and seating for younger children and families. An office and staff room will be located upstairs.

In the second half of Manitou Arts Center, adult fiction will be housed in the First Amendment Gallery on rolling shelves that can be moved when space is needed for gallery openings and artist events. The library will add computers for use by patrons in the existing design lab at the back of the building. The laser cutter and other art-related equipment will remain at Manitou Arts Center and the library will add 3-D printers to the mix.

Construction crews have been hard at work since the beginning of the year to work on turning the art center into a combination library/art center.

“We welcome the opportunity to work with the city and return to the historic Carnegie building once improvements have been made to make the building accessible to all residents,” Michelle Ray, Pike Peak Library District’s chief communications officer said. “In the meantime, we look forward to launching our co-location partnership and opening the Manitou Springs Library inside the MAC so we can best serve the community now and into the future.”

The move is intended to be a temporary solution until the Preserve and Renew Our Carnegie Library Task Force can complete the process of obtaining grants, capital campaign and other funds to complete the project.

The Manitou Springs City Council gave approval on Feb. 8 for the Task Force to move forward with requests for proposals for design and construction cost development and begin the process of selecting an architect and construction company for the project and hire a capital campaign manager to handle the funding for the project. An engineer will also conduct a geotechnical study on the site to ensure the ground will be solid enough to handle the expansion, as there is no record of any such studies having been conducted at the site, according to city officials.

Some funding for the project has been earmarked for use from the voter-approved Manitou Arts Cultural and Heritage Initiative, which uses a portion of a set sales tax to fund projects, which also includes Hiawatha Gardens, Miramont Castle, Manitou Arts Center and Manitou Heritage Center.

Move Over Manitou! Green Mountain Falls Moving Ahead with Plans for Paid-Parking System