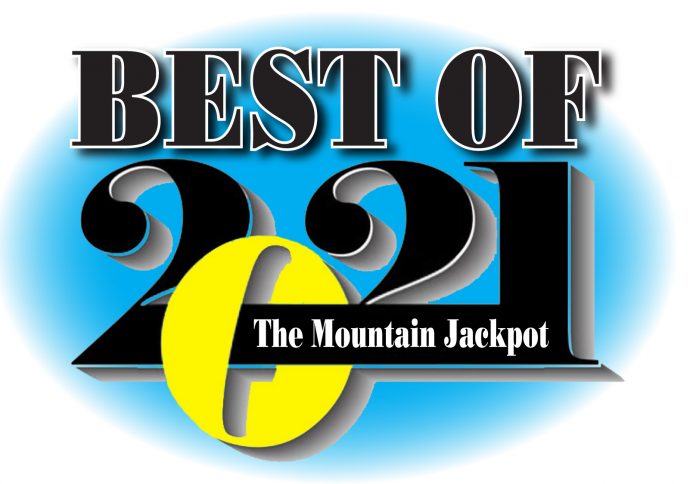 Keep those voters pouring in, as we are entering the final weeks of TMJ’s annual Best Of contest for bragging rights for entertainment happenings, gaming, dining, shopping, gossiping, recreating, creating havoc and much more in our Great High Country, not to mention a laundry list of  individual titles. Visit www.mountainjackpot.com to cast your tallies. Click here to vote.

In recent weeks, we have been asked of our own take on certain subjects.

So, in our Best Of style, here we go in our own preliminary awards for politics, sports and miscellaneous subjects in the early stages of 2021.

Best Local Live Zoom Government Meetings: The town of Green Mountain Falls.  GMF Town Hall and the associated staff takes a beating sometimes on social media, and I certainly wish they would return to in-person sessions.  However, give credit where it is due, as their Zoom sessions have great video/audio quality. Better yet, the meetings are lively, colorful and quite a lot gets done within a two-hour period.  The Woodland Park folks should follow their model, and end their soap opera marathons.

Best Lobbying Efforts:  The Teller County Commissioners (past and current) and staff.  Teller nearly faced another complete lockdown near the end of 2020, with the area essentially entering the Red Zone. That would have shut down casinos again, crippled the economy and turned Cripple Creek  into a permanent ghost town.  But their persistence paid off, and now it appears we are trending in Blue-land, which is great.

Best Social Media Fight: The battle over the future of the Salute to American Veterans Rally and motorcycle ride. Cripple Creek loves to fight over events and festivals, as everyone alive there is a certified marketing expert. This battle, sparked initially by the city’s decision not to fund any festivals this year, except for July 4th, has gotten ugly. The city finally enacted a mini-peace treaty by issuing an official stand on the annual festival. Look for a Salute Rally Peace pact now for three weeks; no, let’s make that  two days.

Best Dumbest Resolution: The current attempt by the Woodland Park City Council to challenge the constitutionality of the state’s COVID-19 mandates.  As one government administrator  mentioned to me recently, this has about as much of a chance of making a difference as the attempt to exempt bars and casinos from the state’s previously enacted smoking ban. Hey guy and gals on the council, why challenge success? If you really want to make a difference, join forces with Teller County and make a pitch to the Colorado  Department of Public Health and Environment and the governor’s office and state lawmakers. Teller County has been pretty successful in negotiating with the state. The constitutional question over this will go absolutely nowhere and is a complete waste of everyone’s time.  It is an exercise in futility. Instead, issue a letter or proclamation, stating your opposition to the restrictions, if symbolism is the prime goal here.

Best Sequel to “One Flew Over the Cuckoo’s Nest.”  Any session of the Woodland Park City Council.  It’s too bad author Ken Kesey passed away years ago, as the WP Council meetings would have emerged as a great setting for a follow-up sequel by the acclaimed author. Jack Nicholson, who played the main character in the movie, Randle P. McMurphy, may even want to mimic someone on the council.  The big question, who is going to play Chief Bromden and Nurse Ratched?

Best Progressive Idea Doomed for Failure:  The concept of paid parking in Green Mountain Falls. Hopefully, this possible plan will get killed, at least in the main downtown area. For a new attraction or paid lot for hikers, it may work.  But there is no need to turn GMF into an anti-tourist town and try to mimic Manitou Springs. This plan appears about as realistic as shutting down the trail system.

Best Mysterious New Attraction:  The future James Turrell Skyspace installation in Green Mountain Falls. Even with official renderings, great explanations by project representative Jesse  Stroope and property owner Chris Keesee, the big talk around town: What exactly is this?   From a journalistic standpoint, it’s a challenge to summarize in an understandable manner.  We will just have to wait until this summer, when the attraction debuts at the Green Box Arts Festival.

Best Missed Festival:  Cripple Creek Ice Festival.  With the frigid weather we are confronting now, this is one event that is sorely missed. It is one festival that always seemed devoid of local politics.  It served as a great cooperative effort between the casinos and the town.  Hopefully, it will get rekindled in 2022.

Best Coronavirus Drag:  No, it’s not the masks Rather, it’s the inability to have public meetings and gatherings. Zoom fatigue is striking big-time, with folks ready to dish their computers in the garbage can.  We need to move in the direction of opening up meetings more to the public.

Best Bureaucratic Nightmare:  The push for COVID-19 vaccines. I don’t think the state government could make this process more complicated if they tried.

Best subject not to talk about locally: The presidential election and U.S. Capitol incident.  No  matter what you say, individual opinions up  here (Democrat, Republican or Independent) aren’t going to change.  So why bother with social media posts on these subjects.

Best Sports Bust:  Super Bowl 55.  Luckily, the Phoenix Open golf tournament in Scottsdale, Arizona (or whatever they call it now) was featured several hours before kickoff, and it was much more interesting and dynamic than the so-called big game. It featured the first golf outing, featuring fans, and this really made a difference. The tourney was eventually won by a familiar fan favorite, Brooks Koepka, who isn’t afraid to showcase his boastful attitude front and center. For un-golf fans, this is a tourney that typically offers one of the wildest amphitheaters in links history, with as many as 200,000 fans a day partaking in the event. It’s party-time in Arizona, with one hole that almost conjures up images of the Roman Coliseum with huge crowds booing and cheering players and making colorful comments.  This atmosphere wasn’t totally relived with COVID-rules, but you got a sample of the good old days. Bring them back.

Best Disastrous Baseball Trade:  The deal to dispose of Colorado Rockies’ star third baseman Nolan Arenado.  What were the idiot owners and head management operators thinking? Nolan was a great highlight, renowned for  his aggressive attitude, remarkable fielding and clutch hitting. Looks like the Rocks are headed to the cellar permanently.

Best Future Sports Hope: Professional sports with fans can return this year.  These contests  are just not the same without fans.  The Pikes Peak International Hill Climb is making a smart move by bringing back fans.