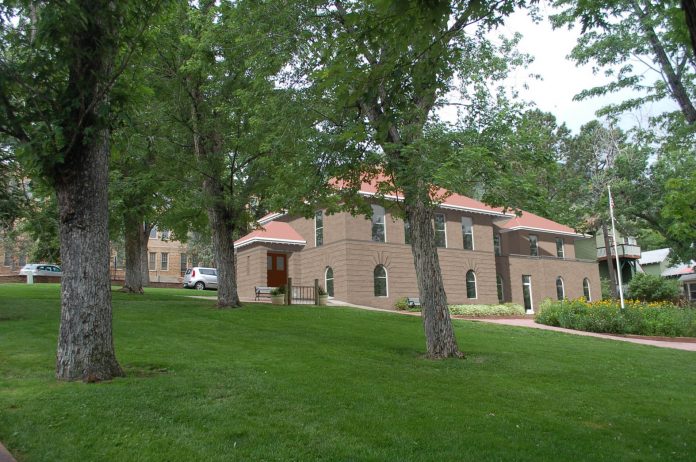 As the Manitou library prepares to reopen at its new temporary home at the Manitou Arts Center, supporters of the expansion movement of the town’s Carnegie Library are ready to move forward in the push to bring the historic building into the 21st century.

This is something they have been striving to achieve for many years with very little to show for their efforts.

In December, the Manitou Springs City Council voted 5 to 2 to approve a resolution to support the expansion of the city-owned building at 701 Manitou Ave.

The task force is comprised of volunteers who are passionate about ensuring that the historic building, which opened in 1911, is accessible to all members of the community under compliance with the Americans with Disabilities Act of 1990. Last year, the library came under attack after a complaint was filed that the building could not accommodate wheelchairs. This led to the establishment of a temporary location at the Arts Center.

In October of last year, the task force was given the mission to proceed, allowing the three subcommittees to begin their activities in force. The sub committees are: community outreach, headed by Laura Ettinger-Harwell and Linda Morland; grant writing/fundraising, headed by former library director Margaret Morris; and library expansion/Americans with Disabilities Act compliance, headed by Mary Pulvermacher.

Currently, the task force is helping the city develop requests for proposals for costs associated with design and construction, selecting an architectural and construction firm, working with the city for developing a capital campaign manager and meeting weekly with officials with the Pikes Peak Library District, which operates the library services in coordination with city staff.

Library Planning For the Next Century

The issuance of the requests for proposals for engineering and fundraising and facilitation of the review and award process will be overseen by Christine Lowenberg, director of Manitou’s planning department. She stated that design and engineering consultants will also conduct geotechnical studies at the site to ensure that the expansion will be built on stable ground.

“With the way the soils are in this area, it is good to be sure the site is as stable as possible,” she said. “There is no history of any previous soil analyses being conducted at the site.”

Members of the task force will also work on an application to receive Tier I MACH funds, which were designed to be split between Manitou Arts Center, Manitou Heritage Center, Miramont Castle and Hiawatha Gardens, as approved by voters in November 2019.

“Apart from what has already been earmarked for the library and taking into account future MACH distribution, the task force will assist the city and raise as much as we can,” Ettinger-Harwell said. “Of course, we hope to raise enough to cover the cost of expansion, but we will do our best and I think we have a great team of people who are already volunteering to help us get there.”

Morris added that the fundraising subcommittee is researching grant possibilities, which could include foundations, private families and corporations.

The Friends of the Library group has spent more than 20 years working toward making the building compliant with the Americans with Disabilities Act and expansion of the building, since the current building only has the capacity to hold 19 people under current fire code restrictions.

Over the past 20 years, efforts have been shared between the Friends group and residents through surveys, emails, town hall meetings, public board meetings and through face-to-face contact. The first community survey went out in 2005, according to officials.

The task force will continue to communicate with the public throughout the process to share milestones and partnerships through emails, press releases and social media outlets.

“After 20-plus years we are thrilled things are finally moving forward and that progress is being made toward the expansion and preservation of the building,” Pulvermacher said. “We are excited that the community will finally get a library that meets the needs of those it serves and will be brought up to modern standards, making it a library that will continue well into the next century.”

In other Manitou News, Police Chief Brian Churchill, who took over the position in October 2019 after having served as chief in Indianapolis, Ind., has been placed on administrative leave. No further information is available, as it is being classified as a personnel matter. Detective Bill Otto, who was formerly with El Paso County Sheriff’s Office until July 2020, will serve as acting chief.