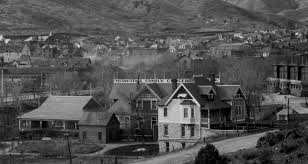 Following years of debate and discussion, the Manitou Springs City Council has recently approved a resolution that will help move a controversial project aimed at partially saving a revered, historic building (referred to as Hiawatha Gardens) one step closer to completion.

The proposed project would also pave the way for a new transportation hub.

Since 2016, when the city of Manitou Springs purchased the 1920 building, which most recently housed Tajine Alami Moroccan Restaurant, the future of the building has been a subject of debate and frustration for local officials.

In October, Manitou City Council passed a resolution in favor of preserving the building’s historically significant portions and using it as a community center and transportation hub. However, some members of the council favored completely demolishing the structure and using the space to increase parking and eventually constructing a parking structure at the site.

The transportation hub proposal is included in the tax incentive agreement with the owners of the Cog Railway as part of the collaborative effort to address Manitou’s parking and transportation issues, which have long brought frustration to city officials. The owners of the Cog Railway will contribute $500,000 as part of a three-way partnership which also includes the city of Colorado Springs.

As a result of the study by the three engineering firms, three options were presented to the council at a work session.

Council members favored the first option. The actual cost for demolition and analysis will only be known once the bid process begins. But the work won’t come cheap.

Consultant Laura Neumann said restoring the building would cost less than constructing a new structure, which would require compliance with new floodplain regulations. Rehabilitation of the structure would avoid those costs to the city.

Some of the costs could be reduced through the use of tax incentive agreement funds and funding from Pikes Peak Area Council of Governments. Additional grants could be obtained once the building has been returned to the historic district, which is also part of the plan.

According to City Administrator Denise Howell, the eventual use of the structure has yet to be determined and the eventual use will impact the overall cost of restoration, and will also require additional public feedback.

One argument in favor of restoration is that it could eventually replace Memorial Hall inside the city hall as a meeting and venue place for Manitou, thus freeing up space for much-needed office space inside the already cramped building.

Mayor John Graham wants the planning process to be completed by May.

Funding for part of the project was included in the tax initiative approved by voters as part of the Manitou Arts Cultural and Heritage Initiative, which also includes the Carnegie Library building, Manitou Arts Center and Miramont Castle projects.