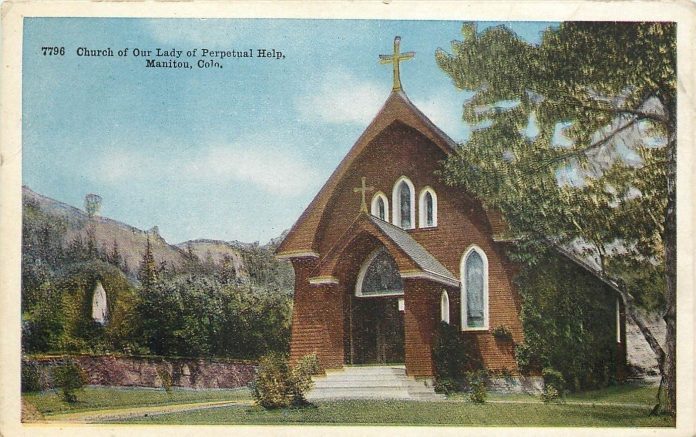 A Manitou Springs landmark since 1889, Our Lady of Perpetual Help Chapel, located at 218 Ruxton Ave., will soon be getting some long-overdue and much-needed improvements to better comply with the 1990 American’s with Disabilities Act.

The structural improvements will make the chapel more accessible for those in wheelchairs who have otherwise been unable to attend worship services and will significantly alter the look of the historic building, Associate Pastor Rev. Randy Rentner stated.

Plans include adding a ramp from the front sidewalk to a wide deck that connects the chap[el to the adjacent community center, the Father James Schultz House. A new doorway entrance will also be added on the side of the building, Rentner added.

Other plans include restoring the grotto in front of the church and remodeling the restrooms in the community center to comply with the Americans with Disabilities Act guidelines for accessibility.

Plans for improving access to the church began in 2018 when Rentner arrived as associate pastor. He began holding monthly meetings with anyone in the congregation willing to discuss plans and changes. The main priority discussed during those meetings was access, he said.

Rentner contacted Zachary Taylor of Colorado Springs, an architect, who completed renovations to Sacred Heart Church on the Westside, and asked him to develop plans for renovating Our Lady of Perpetual Help.

Once the plans were discussed, things began to develop and come together, Rentner added.

Organizers are hoping construction can begin as early as next spring, but a lot of it depends on finances, how the pandemic plays out and how quickly the economy recovers.

The project is projected to cost around $200,000, which the chapel hopes to collect through various fund-raising methods, including grants, loans, donations and contributions. Members of the parish have already raised about $65,000 and the parish has applied for a $50,000 grant from Catholic Extension, a fund-raising organization.

Renter hopes the remaining funds can be collected through donations and other fund-raising projects over the next few months.

“Many of the fund-raising events we have been discussing since we began looking at this project all involve people getting together,” Rentner said. “All of that has been greatly curtailed because of COVID-19.” During the holiday season, members of the parish sold Christmas cards featuring the church’s nativity display. The display features several prominent residents of Manitou Springs, including the late artist Charles Rockey, who modeled for Manitou Springs artist Tina Riesterer.

One interesting feature of the nativity scene is a white-haired terrier. But, the entire scene became a Christmas card to help raise funds for the remodeling project.

The parish also hopes to receive some funding for the project through a recently-created GoFundMe page.

The proposed work meets standards and guidelines established by the Historic Preservation Commission and will include local greenstone, pink concrete that matches many projects in the city and built-up soil to retain the original appearance of the grounds around the church.

The dilapidated fountain that was added to the grotto in the 1940s will be removed as well. In the past, it used city water that flowed into Fountain Creek, which proved too expensive in the long run. And, the fountain is not something the parish is interested in anymore, Rentner added.

“Our preference is to remove all the old concrete and restore the grotto to its original appearance,” Rentner said. “We plan to remove the stones in front of the grotto, where it is difficult to walk and use the concrete that is so popular right now in Manitou.”

The grotto has been popular over the years with tourists and locals. Many people stop in there for prayers and they often find flowers and other religious objects in the niches, he said.

The top priorities for now are construction of the ramp and deck. After that, the focus will be on the grotto and finally the conversion of the restrooms at the community center.

Our Lady of Perpetual Help Parish was founded in 1860 in what is now Old Colorado City on the westside of Colorado Springs to minister to the first settlers in the region as a way to combat the high crime associated with the gold mines and the establishment of the capital city of Colorado Territory. On July 30, 1882, Bishop Joseph Machebeuf dedicated a Catholic church in Manitou Springs, to draw people coming to the region to take advantage of the health spas springing up during the tuberculosis epidemic. Built by the Gillis brothers on Ruxton Avenue, near the rail line that looped toward Iron Spring, the new church was dedicated on Aug. 1, 1889 with Father Frederick Bender serving as its first pastor. A small rectory was built later in the year.

Four years later, Father J.B. Francolon became the pastor and later built the nearby Miramont Castle. On Aug. 3, 1903, the original church was destroyed by fire. The existing building was built and dedicated the following October, when Father Michael F. Callahan added the Lourdes Grotto.

In 1926, the Oblates of Mary Immaculate took charge of Our Lady of Perpetual Help, using it as a mission of the expanded and renamed Sacred Heart Parish on Colorado Avenue. The Congregation of Holy Cross took over pastoral leadership in 1984 and maintains the chapel to this day.