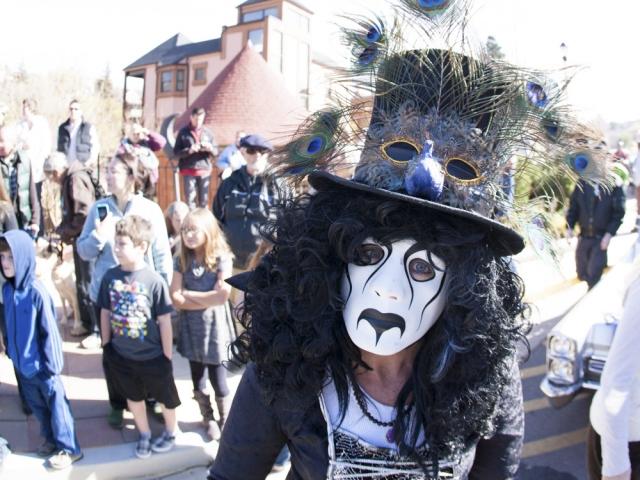 The COVID-19 pandemic has killed another popular local event, as part of the growing  list of cancellations for the 2020 tourist season.

The Manitou Springs Chamber of Commerce has pulled the plug on the popular Emma Crawford Coffin Races event, now in its 26th year, originally scheduled for Oct. 24, because of concerns over health and safety issues related to the coronavirus scare. This is a major blow to the town’s tourism banner, as this festival often attracts more than 10,000 people and has gained national media coverage.

But all is not lost, as the chamber has developed a plan to maintain the spirit of the event, which has been named the Emma Crawford Cup.

Traditionally, the event draws thousands to Manitou Springs in a celebration of everything spooky and weird just in time for Halloween. On-lookers and participants don ghoulish costumes, build and race custom coffins on wheels down Manitou Avenue in an attempt to win prizes in honor of the tragic and legendary tale of Emma Crawford, who arrived in Manitou Springs from Massachusetts seeking a cure for tuberculosis and was eventually buried on the top of Red Mountain. Her remains eventually washed off the mountain and were discovered by local school boys and she was reburied in a local cemetery near Manitou Springs High School, where a marker honors her legacy.

In a press release, Mackenzie Helms, marketing coordinator for the Manitou Springs Chamber of Commerce said, “This is a tradition for Manitou and something we take very 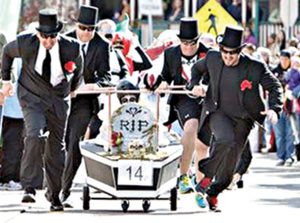 seriously. As much as it’s a sort of fun and zany weekend event as a whole, it’s something that we’re really focused on throughout the year and it plays such a big part in our town and everything going on in Manitou. We want everyone to see that side of it, we are going to be back, and while we can’t race this year, we are going to make things as fun as possible.”

As a result of the cancellation, there will be three events held instead.

The first event is a T-shirt design contest, following the theme “The Year That Wasn’t.” Artists are invited to submit designs to coffinraces@manitouchamber.com through Friday, Aug. 28.

After all designs have been submitted, the Chamber will post them in the Visitor Center and open online voting to determine the winning design. Voting will run through 5 p.m. on Sept. 11. The winning artist will be notified by Sept. 14 and pre-orders for the T-shirts with the winning design will be accepted from Sept. 14 to Sept. 25.

The second event will be a costume contest beginning on Oct. 1 and running through Oct. 23. Prizes will be awarded for “Best Emma” and “Best Team Theme”, just as in a typical Emma Crawford event. To participate in the costume contest, submit an image of you decked out in costume to coffinraces@manitouchamber.com. And, also post on social media with the hashtag #EmmaCup.

The third event is a scavenger hunt throughout Manitou Springs. Beginning Oct. 17, the Chamber of Commerce will release a list of riddles and clues that teams will have to solve and submit pictures showing completion to coffinraces@manitouchamber.com.

Each completed task will earn the team entry into a drawing for prizes. Teams of five or more may register at the Visitors Center, 354 Manitou Ave. or online at manitousprings.org. The contest will run through Oct. 25 with winners being announced Oct. 26.

Organizers are already optimistic and making plans for Emma Crawford 2021. Helms stated that they are making every effort to figure things out so they can come back bigger and better than ever.

School Back In Session With Student Limits

In other Manitou news, school started back on Friday, Aug. 21 under increased health and safety concerns, under the state requirements established by the health department. Staff monitored temperatures of students upon entering campus, closed the high school at lunch 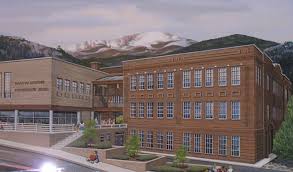 time to minimize exposure during lunch, and struggled to maintain social distancing guidelines and the wearing of masks in the hallways. Approximately, half the students were in attendance under the district’s new structured learning plan, where students switch between in-person and on-line learning. Notably absent are most team sporting events, such as football, which will not resume until January. Buses were sanitized before students were picked up and after they were dropped off at campus.

Lunches were served in the cafeteria with social distancing in place and many classrooms were reorganized to accommodate the change. Positive cases of COVID-19 have caused some districts in Colorado Springs, such as District 2 and District 49, to shut back down after reopening.

City Council revoked the business license for Pikes Peak RV Park, 320 Manitou Ave., for what officials called a violation of “numerous” city ordinances until owner Roger Guzman, who also owns several hospitality related businesses in Manitou Springs, could correct the violations. He appealed the decision with evidence that the violations had been addressed prior to the Aug. 17 deadline. This is the first time a business license has been revoked by city council, according to official records. City Attorney Jeff Parker said that if fines had been issued, they could have been significant.

Code Officer Cy Cushenberry is leaving Manitou Springs to open his own home inspection service. He has been employed by the city since 2017. He will remain to help train whoever is hired to replace him. He helped start the Bear Smart service in Manitou Springs to keep bears out of trash cans

Cog Railroad Tourist Attraction Planning to Reopen in May