District Rocked by Resignations and Concerns Over Student Safety

As the beginning of the 2020/2021 school year fast approaches, officials with Manitou School District 14 are facing several challenges to prepare for the return of staff and students to the campuses.

The primary focus of the school board at its meeting on July 13 was student safety in the midst of the pandemic, especially following an extension of emergency orders and a mask ordinance by Governor Jared Polis.

The last few months have been fraught with a series of setbacks, with the closing of campuses, the transition to online learning, the cancelling of sports events and graduation, and the recent resignation of district administrators. Plus, the information from public health authorities that changes almost daily and concerns from parents that continue to pile up, all adding to the frustration for district officials.

During the meeting, which was held via livestream, Superintendent Elizabeth Domague presented the latest information on pandemic planning, and explained that the school district has received El Paso County Health Department’s COVID school guidelines standards. She stated that the guidelines leave a lot of uncertainty, but informs them about the next decisions in the process.

She went on to describe some of the models being discussed for the return of students, describing full-week, in-person instruction before transitioning into the district’s hybrid approach. Under this model, half the students would be part of a cohort, which allows the district to have up to 60 percent of the students  on campus at any one time, where they would be engaged in what Domague described as asynchronous learning.

Under this model, Domague explains that there will be several challenges, one of which is the difficulty parents will face in finding childcare on the days their children are home. 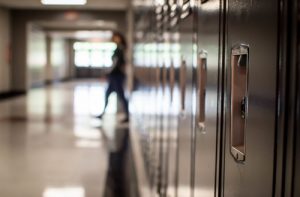 Other challenges have been presented by parents during previous school board meetings and in a survey distributed to families, especially in regards to the online learning portion of the hybrid model.

Domague also discussed the requirement for masks to be worn by all faculty members, per city and state ordinances. The district has received more than 10,000 masks and other items of personal protective equipment and is installing plexiglass barriers to help decrease potential transmission. To date, only 30 percent of the surveys have been returned.

During the meeting, parent Susan Taylor expressed concerns related to COVID-19 and the potential plan for students to return in the fall. She questioned what the administration would do when the first teacher tested positive for the virus, or when students began to test positive, or when a teacher dies from the virus. She asked if the district had permanent substitutes or if they were shared with all districts in the Pikes Peak region.

Taylor expressed concern about their safety and their daughter’s safety if school reopens in the fall, as well as the hybrid model presented by the board and the way the shift to online learning had taken place at the end of the previous school year once the virus hit.

School board president Tina Vidovich recommended that Taylor attend weekly back-to-school meetings so she could pose her concerns and questions directly to the administration, since the board cannot address issues without a consensus. Her concerns will be added to the records of the board meeting, where they can be discussed further during work sessions.

The district’s Chief Financial Officer Suzi Thompson gave an overview of the district’s finances and said that, despite recent setbacks, the finances are fairly closely aligned with last year’s fourth quarter. She also stated that there have been minimal changes in the budget, with savings on bus fuel and activity funds as a result of the shutdown. Salaries and benefits make up 86 percent of the overall budget and, since employees were paid through the end of the year, despite the shutdown, any savings gained would not be significant, she added.

During the meeting, the board agreed to extend summer break through Aug. 20. The first day back to school for students, in whatever form that takes, will be Friday, Aug, 21, with Thursday, Aug, 20 being designated as a staff work day.

Also, in school district news, High School Principal Markus Moeder-Chandler has resigned effective July 9. This follows the resignation in June of the middle school principal and the resignation of the elementary school principal earlier in the year, prior to the shutdown. The vacancy was posted on the district’s website and the district has reached out to students, staff and parents regarding their recommendations for filling the position.

The resignations have sparked concern among parents concerning the leadership of Domague.

The school board members have examined each resignation and determined that they were personal decisions and not a reflection on her leadership as superintendent. The school board issued a statement that they support her through this tough time, and the decisions that have been difficult to make in the midst of the pandemic and the future of the district as a whole, which extends up into Green Mountain Falls