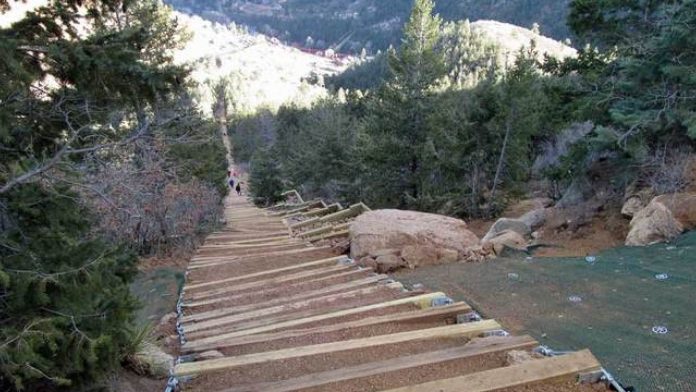 Following an executive meeting of the Manitou Springs City Council early last week, the fate of the Manitou Incline still remains in limbo, as members failed to come to a decision.

As a result, this killed the hopes of Colorado Springs’ officials to open the attraction on Wednesday, June 17

During an earlier work session, Karen Palus, director of the Colorado Springs Parks, Recreation and Cultural Services Department, and her colleague Kurt Schroeder, presented an interim plan to reopen the Incline, which has been closed since March 26 as part of the COVID-19emergency order.

Residents of Manitou Springs have argued repeatedly that further closure of the Incline will seal the fate of Iron Springs Chateau, which benefits from parking fees paid near the Incline, since the shuttle buses are not running and the performance at the historic theater have been put in hold as a result of the pandemic. Others have also argued that continued closure will hurt the local businesses that rely on the influx of visitors using the Incline.

Manitou’s plan for reopening the Incline called for a paid reservation system operated by Manitou staff and attendants at the Hiawatha parking lot and the entrance to the Incline. The city would also use the existing online parking system to direct users to available parking areas.

When Palus and Schroder attended the work session, their goal was to get the interim plan approved on June 16. That did not happen.

As the Council went into Executive Session, Council Member Julie Wolfe asked that Police Chief Brian Churchill not be allowed to attend because of his apparent lack of enforcement during the closure of the Incline. The purpose of the session was to address directions to take moving forward. The majority council members decided he should be allowed to attend, despite her objections.

As a result of the failure to pass during the executive session, City Council scheduled another executive session for June 23 to again address the issues and the “interim” plan for reopening and addressing issues beyond COVID-19 regulations.

Local business owner Tim Haas stated that there were complaints regarding the joint announcement concerning the Incline based on a press release issued by the city of Manitou Springs and the city of Colorado Springs, and the fact that there was no information in the document package regarding the Power Point presentation used at the special meeting. He stated that it was all a waste of time.

In other council business, June was declared as Bike and Outdoor Recreation Month in Manitou by proclamation. The Mayor’s Bike Ride, normally part of the celebration, was cancelled as a result of the pandemic.

One item for future discussion is the possibility of a mill levy increase to help the city budget recover from the closure caused by the pandemic, as well as a bond issue to help improve the city’s aging water infrastructure.

Mayor Pro-Tem Nancy Fortuin was appointed as the council’s liaison to the Manitou Arts, Culture and Heritage Board established to help allocate funds from the special tax approved by voters in November and by Council in February after being denied by Council in January.

A proposed executive meeting regarding City Administrator Denise Howell was tabled. Per law, she had asked that discussions regarding her be held in open public meetings. No date has been set for the item to reappear on the council agenda.

No date has been set yet for the return of in-person council meetings, as they have been held via the Zoom virtual conferencing system, since the coronavirus closures.