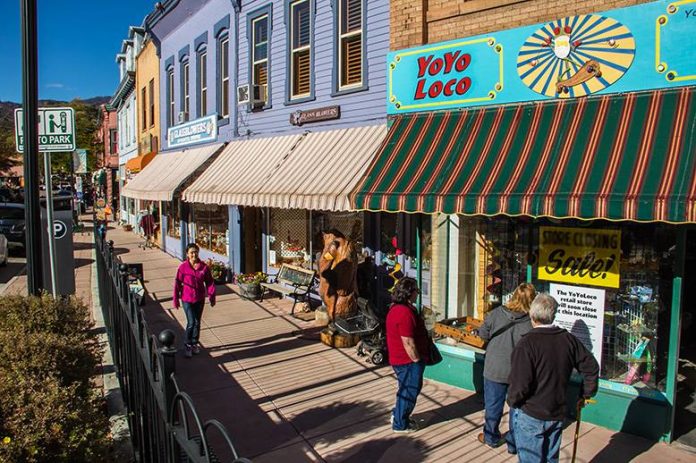 As most businesses in Manitou Springs return to business as usual following the pandemic that shut down the state and country for two months, restaurants began allowing dine-in services last week with restrictions

And despite the continued closure of the Manitou Incline,  many outside eating areas have been packed with locals and tourists, with the kick-off of the summer season.

Some stores are still shuttered and some have completely closed. Renovations continue at Uncle Sam’s Pancake House and the former Stage Coach Inn, with both

establishments planning to reopen soon. The Library is offering curbside pick-up for books and City Hall has reopened for most services. However, the museums and the Manitou Arts Center still remain closed, as does Sun Water Spa. Hotels have reopened, as well as the downtown Arcade.

“It is good to see the crowds back out and the businesses reopening,” a Manitou Springs resident said who was out walking her dog. “It has been quiet for far too long. I feel sorry for those businesses that have suffered through this and will continue to suffer.”

In spite of all that, the streets are packed and people are in a relatively good mood, keeping their face coverings handy as they peruse stores, patiently waiting to enter some that are restricting the number of customers allowed at one time. For example,

Patsy’s Candies has conveniently placed tape to keep customers at least six feet apart while standing in line. License plates tell the tales of tourism resuming: California, Texas, Illinois, Minnesota and Missouri among those parked along Manitou Avenue on Thursday.

In Old Colorado City, at least three businesses are permanently closed as a result of the pandemic. Coffee shops, bars and restaurants have mostly reopened with limited indoor seating, per state guidelines for safety and Fat Belly Tacos remains closed until further notice. The district also held a virtual first Friday arts walk.

And as the tourist season kicks off and the economy gets back on track, the city of Manitou Springs is facing the possibility of Phase I water restrictions, as the water levels in the reservoir continue to decline.

During a City Council meeting last week, the city’s water consultant, Ann Nichols, stated that the reservoir, which receives its water from snowmelt runoff from Pikes 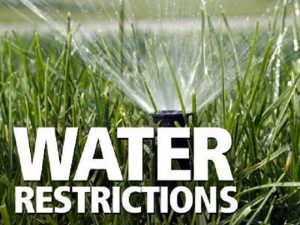 Peak, has decreased by 4 percent. She said the region is in a moderate drought and the National Weather Service is predicting lower than normal rainfall and higher than normal temperatures for the summer.

The reservoir level is still over the top of the spillway, but the city needs to make plans to reduce water usage as a precaution, she stated. “This is a normal, reasonable conservation practice,” she said.

During 2019 there were no water restrictions and the demand for water in Manitou Springs was about 660-acre feet. French Creek, the city’s main water supply, yields about 90-acre feet per month. The reservoir currently holds about 710-acre feet, which can change because of evaporation or increased water demands.

French Creek is still spilling, but if the season remains dry and hot, restrictions could become a reality in the near future, she stated. Colorado Springs has already restricted water usage. The city is asking residents to be water conscious by watering lawns less often and using large amounts of water only as needed.

Phase I water restrictions include: watering outdoors at even-numbered properties on Tuesday, Thursday and Saturday; watering outdoors at odd-numbered properties on Wednesday, Friday and Sunday; outdoor watering at properties south of Manitou Avenue not having assigned addresses on Tuesday, Thursday and Saturday; outdoor watering for a maximum of two hours per day between 5 a.m. and 8 a.m. or 7 p.m. to 10 p.m.; limiting watering in areas to 20 minutes per location to help with irrigation; outdoor watering permitted on off days to refill ornamental pools, hot tubs and swimming pools; hand watering with a hose is permitted as long as not left unattended; unrestricted drip irrigation is permitted; and washing of cars, sidewalks, awnings, decks, exteriors and windows is permitted with a hose equipped with a shut-off valve or adjacent to a nozzle, which must be engaged when the hose is not being used.

Also, during the Council meeting, members selected seven voting members and three alternates to serve on the Manitou Arts, Culture and Heritage Board of Directors. This group is  responsible for allocating the funds from the MACH sales tax approved by voters in November and by City Council in January. There was a total of 13 applicants for the positions. Those selected were: Neale Minch, four years; Nancy Wilson and Sara Gallagher, three years; Randy Hodges and Michael Howell, two years; and Anna Andrews-Mills and Laurie Wood, one year. The non-voting alternates were Pat Sitzman, Shanto Toll and Jason Wells. The alternates fill in when one of the regular members is unable to attend council meetings.

Cog Railroad Tourist Attraction Planning to Reopen in May