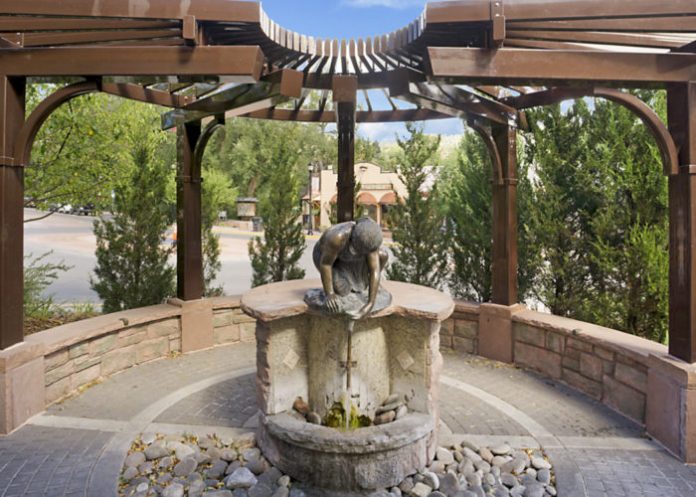 As is true for all American tourist towns these days, Manitou Springs is not how it should be.

The sidewalks are more populated with warnings than people. The arcade is dark. The gift stores, candy stores and restaurants are dark. Window signs say “sorry” and “closed” — “since the world has gone totally nuts,” reads the one at Totally Nuts & Co., the sweet-smelling shop housed in old tuberculosis huts on Manitou Avenue.

The running creek breaks the unusual silence, along with the chatter of vagrants here and there. One finds himself up Ruxton Avenue, sitting on the bench near Iron Spring. This is one of eight wells celebrating Manitou’s legendary mineral waters. 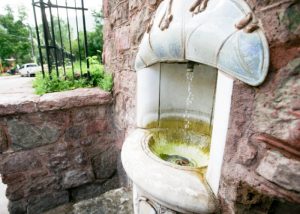 These days, when the coronavirus reminds us that life can be stranger than fiction, one might reconsider odd legends. Maybe it is true what early people said about these “healing waters” of Manitou, a name derived from what tribes knew to be a “great spirit.”

“Man, it’s gotta be true,” says this bearded fellow, who bears a Bible, a pack of cigarettes and two water bottles, which he has filled with this iron-rich tonic.

Tastes like a mouthful of rusty train tracks, he says. Which is true. Without a doubt, it’s the worst and least appealing of the wells; the others pour forth a flavor like soda, true to their storied reputations.

Historians say it helps, but is not a cure by any means.

Mother Nature’s alchemy helps. Springing up from a deep-seated aquifer that meets ancient rock and gas, the mixture of iron, alkaline, calcium, potassium and more helps. Helps in a way similar to a sports drink. 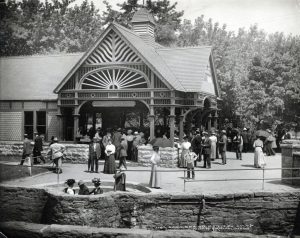 now. No, this pandemic’s masses aren’t about to seek these springs, as they did during the tuberculosis scare.

Decades before then, white explorers found the cool, bubbling streams to be as remarkable as suggested by the natives, who held them sacred.

In the early 1840s, John Fremont journaled of finding the springs after an arduous, stormy day searching with his crew.

In 1848, George Ruxton by his own description “was half dead with thirst” when he came upon the water. “I dipped the cup into the midst of the bubbles, and raised it hissing and sparkling to my lips,” he wrote. “Such a draught! … almost blowing up the roof of my mouth with its effervescence.”

Credited as the first white woman to climb Pikes Peak in 1858, Julia Archibald wrote of sweet relief alongside her party. “We drank deeply from these Saratogas of the wilderness …”

Later, as plague crept like a shadow, the waters took on new fame.

During the tuberculosis outbreak, there was no better place to be than Manitou, the growing West and broader nation came to believe. This was largely due to an 1874

pamphlet by Dr. Edwin Solly. Sanitariums sprouted in Colorado Springs. The sick remarked on the fresh air and sunshine.

But how much did Manitou’s springs have to do with that?

Solly discredited native people, “believing as they did that the Good Spirit breathed into the water the breath of life.” Though it was true, he wrote, that the waters were rather miraculous — capable of easing stomach pain and clearing congestion, of helping poor livers and kidneys. Perhaps even alcoholism could be cured, he hinted. All of “which not even the wildest exaggerators up to then had dreamed that the springs possessed,” Sprague wrote.

Town founders Gen. William Jackson Palmer and Dr. William Abraham Bell were likely thrilled by Solly’s pamphlet. It helped sell their vision of Manitou as a European-style retreat for the upper class. But, a financial panic in 1873 hit just as things were getting started, so more regular folks began arriving.

They would be bound for Iron Spring, heading up the steep path of Ruxton Avenue, which would come to be accessed by a trolley established by Winfield Scott Stratton. One well is named for him, drilled amid the Great Depression.

Now Stratton Spring spouts beside the Loop, now-shuttered except for carry-out orders in the midst of the current epidemic.  Another is Wheeler Spring, named for Jerome Wheeler, a local benefactor who started bottling the water at a now-shuttered plant farther down Manitou Avenue toward the edge of town, closed in the years of World War II. Another company of Wheeler’s lasted: Macy’s, among department stores whose fates seem uncertain today.

And they seem as popular as ever.

And grateful this day is the man who parks his truck along Ruxton to fill up 10-gallon jugs at Twin Spring, the best of the waters, he says.

Farther up Ruxton at Iron Spring sits a man who says he’s tired from traveling. He’s content here with his Bible, cigarettes and bottles of water, however funky tasting.

He might just stick around, “ride it out,” he says. “If there was ever an apocalypse, you can still get your minerals. It’s a good place to be.”