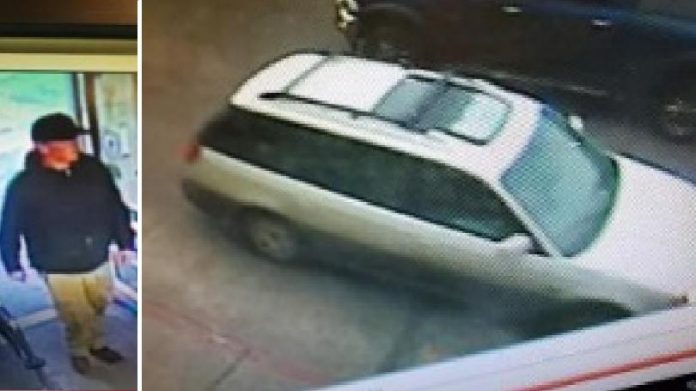 An investigation continues into the first armed robbery of a local business in Woodland Park for more than a year, with the police pursuing a variety of leads.

On Feb. 20, police received reports that a man had robbed a cashier at the town’s General Nutrition Center (GNC) store at gunpoint, in the Safeway shopping center, and had fled with cash from the register.

According to a press release sent out by the Woodland Park Police Department, the man was caught on video in the shopping center located on the east side of town just after 5 p.m. The suspect was described as a white male who was wearing a black or blue baseball cap, a blue jacket and khaki pants.

In the press release, the police said that he was seen in on camera around the shopping area for nearly a half an hour. Then, it was reported that the robbery occurred just after 5:30 p.m. when the assailant walked into the store and pulled a silver handgun on the clerk. The suspect then demanded the clerk give him cash out of the register.

The suspect got away with an undisclosed amount of cash. He was then seen in the parking lot getting into a white Subaru station wagon before driving away.

Currently the case is still under investigation and the police are still looking for information to help them identify the suspect. After the robbery occurred, the police posted a press release on social media outlets, and they have also been working with Crimestoppers to help them get tips to find the suspected robber.

It is not known if the police think that the robbery is related to any other crimes. They also do not know why the GNC store in town was targeted while no other stores in the center reported robberies.

According to Woodland Park Police Commander Ryan Holzwarth, incidents similar to the one that occurred about a week and a half ago do not take place in the city very often. “They (armed robberies) are pretty rare,” the commander said. “Besides the bank robbery that we had last year, or the year before, we haven’t had any other robberies. They are a very rare occurrence.”

One comment made regarding the press release, posted on the city’s social media pages, came from a person that claimed to know who the robber was.

However, Holzwarth said that he could not confirm  this report. “We can’t identify the suspect and we have not been able to talk to anybody who knows him or anything like that,” Holzwarth explained. “We are looking at all the leads but I cannot say whether that it is him (the person blamed in the comment) or not.”