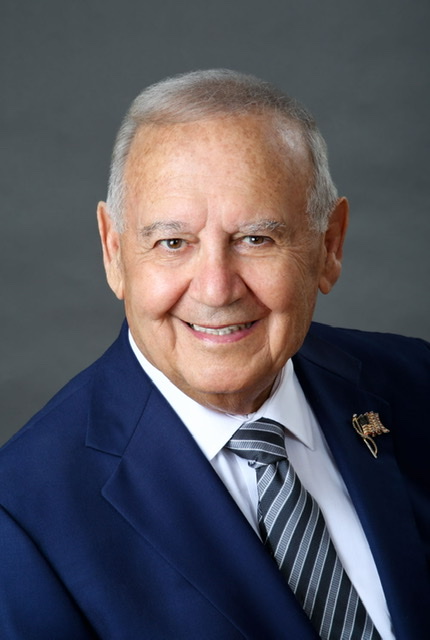 Mr. Jay Cimino’s story began in 1936. Born and raised in Trinidad, Colorado, he spent his high school years at Holy Trinity Parochial School. After graduating in 1954.  Mr. Cimino joined the Marine Corps, and after serving, he attended Trinidad State Junior College in Colorado where he earned his Associates Degree. He then went on to attend the University of Denver, graduating Dean’s List in 1960 with a Bachelor’s Degree in Business Administration. Immediately after graduating, he married Emily Roitz in October at Holy Trinity Church in Trinidad.

After holding various positions in Chevrolet and Ford dealerships in Pueblo, CO and Santa Fe, NM, Jay Cimino joined Phil Long in 1975 as the General Manager. After multiple promotions and many years later, Jay Cimino entered into his current role as President and CEO of the Phil Long Family of Dealerships. Back then, Phil Long was one brand, one dealership and 100 employees. Today, Phil Long Dealerships consist of 10 brands, 25 locations, and more than 4000 new and pre-owned vehicles, making it the largest privately held dealership in the state. The dealerships stretch from Denver, Glenwood Springs, Colorado Springs, and Trinidad to Raton, NM. Additionally, Jay was instrumental in developing the well-known Motor City in Colorado Springs. Motor City is now home to over 50 dealerships. Jay’s leadership, vision, and passion for solid business practices has contributed to many prestigious distinctions. Since 1992, the Phil Long Dealerships group continues to be in the top 100 dealers in the nation.

The strength of the Phil Long Family of Dealerships in such a competitive industry is the result of its ongoing pledge to Jay’s overall vision of Commitment to the Community, Quality Customer Service, and Exceptional Value. With great leadership, Jay Cimino created a legacy of unparalleled community service, community enrichment, and superior customer service and sales.

Jay’s philanthropic nature has fostered a multitude of community partnerships, sponsorships and campaigns, including the first community partnership Mr. Long developed in 1947 with the Pikes Peak United Way.  In addition to the United Way, Jay was instrumental in the campaign to renovate and build a new addition to the Marian House, which helped to transition it from a soup kitchen to a self-sufficiency center. He also was the inspiration for the 15 Fantasy Playgrounds built through-out Colorado Springs and Denver.

Among his other philanthropic efforts are the Susan G. Komen Race for the Cure, the American Red Cross, Discover Goodwill, and Catholic Charities. But most importantly, these projects led to a greater sense of need for the underserved populations and the development of the Mt. Carmel Wellness and Community Center in Trinidad, Colorado, and the Mt. Carmel Veterans Service Center in Colorado Springs.

Love for his hometown of Trinidad inspired growth and change in the city. In 2010, Jay opened Phil Long Toyota of Trinidad and Phil Long Ford in neighboring Raton, NM. In addition to bringing new business to both communities, he established the Trinidad Community Foundation and created the Jay Cimino Champion Scholarship Fund for Holy Trinity Academy students. The citizens thanked Jay for his numerous contributions by building a community park and playground in his honor. He is also instrumental in the revitalization of Trinidad, which includes the following historical renovation and development projects: the award-winning Mt. Carmel Wellness and Community Center, the Purple Toad Social Tap and Grill, the Marty Feeds Building (known currently at The Market Place), Champions Building (formerly the First National Bank Building), the former Delmonico Café building, and La Puerta de Colorado. The La Puerta project will breathe new life into Trinidad, and all of southern Colorado, with over 15 acres of commercial and retail space, including a new 100+ room Hilton Garden Inn.

All of these projects are labors of love, but one of his greatest accomplishments is the Mt. Carmel Wellness and Community Center. The Center features a fully staffed clinic with MDs, Nurses, PAs, MAs and Therapists providing non-emergency, high quality, patient–centered, integrated healthcare seven days a week to Las Animas County and rural southern Colorado. In February, 2020, a new dental clinic operated by Salud Family Health Center will open on the Center’s complex, offering affordable dental services to all members of the community and surrounding areas. The Mt. Carmel Wellness and Community Center also serves by providing a community garden, theater and gathering space, and provides catering services.

Always pushing to do more, Jay implemented his idea to help our military community by creating the Mt. Carmel Veterans Service Center (VSC) in Colorado Springs.  This Center provides wellness programs, transitional services, and resources for veterans who have served and sacrificed so much for our country. The VSC is designed to support the large military presence that is central to the Pikes Peak Region and the entire state of Colorado, and features physical space to better synchronize like-minded organizations and their efforts, serve as a non-profit incubator geared towards the unique needs of transitioning veterans and their families, and to provide world–class wellness programs

Jay has always fully embraced and supported a multitude of needs for the troops and their families. For more than 20years, the Phil Long Operation Home Support program has provided emergency assistance related to transportation forspouses of deployed soldiers. In addition to Operation Home Support, Jay co-founded the non-profit The Home Front Cares, which provides immediate emergency assistance with home, vehicle and basic living needs for vets and soldiers. Another program Jay established is the Returning Heroes program, which sends soldiers returning from deployment and their spouses on a much–needed reconnection retreat. Cimino also supports programs that benefit the Warrior Transition Battalion and the Fort Carson Resiliency Campus to include providing vehicles to aid in PTSD and TBI therapy programs and other adventure-based therapy programs.

His focus to create an environment that encourages a healthy mind, body and spirit extended beyond both Mt. Carmelnon-profits. His progressive thought process led him to develop an on-site Health & Wellness program for the employees working for the Phil Long Family of Dealerships. He built three gym facilities within the dealerships, hired a health and wellness director that provides personal training, weight loss and management programs, nutrition and diet programs, tobacco cessation classes, yoga classes twice per week, and more. During the summer of 2013, Jay opened the first on-site health clinic for employees and family members. The clinic is staffed with a PA and RN, and offers non-emergency treatment, as well as managed care and pharmaceuticals. The on-site clinic is located in the Phil Long Collision Center main building at 4045 Sinton Road in Colorado Springs.

Over the years, Jay Cimino has received well-deserved recognition including the El Pomar Foundation’s prestigious Gov. John A. Love Award; Ford Motor Company’s Salute to Dealers Award; the Citizen Meritorious Service Award; the Columbine Individual Citation Award; the John Venezia Memorial Award; the Council for College Resource Development Award; and the Partners in Philanthropy Outstanding Individual Donor Award. In 2009, Jay received what he says is his highest achievement yet, presented by the Jesuits of Regis University, the C/VIS PRINCEPS, followed the next year with being presented the highest honor given to a civilian by Ft. Carson Army Post, the Good Neighbor Award. Trinidad State Junior College honored Jay in 2012 as a Hall of Fame Recipient, and he received the distinction of Colorado Auto Dealer of the Year. In 2013, the American Red Cross honored Jay as the Humanitarian of the Year, and in 2015 Mr. Cimino was given the Joe Henjum Community Hero Award by The Home Front Cares. On May 11, 2018, Jay was honored during the UCCS Commencement Ceremony for the Distinguished Service Award.  On January, 23, 2020, he will be inducted into the Colorado Business Hall of Fame.