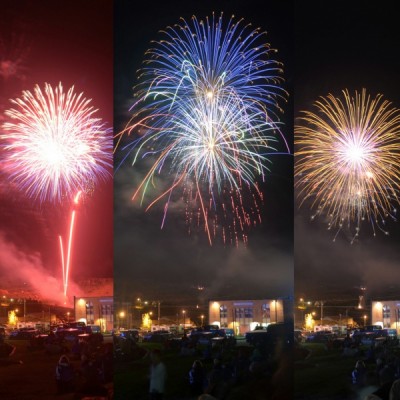 The city of Cripple Creek has silenced any pyrotechnical political fights over July 4th fireworks displays, at least for 2020.

Instead of rehashing a familiar fight over the timing of the city’s infamous Independence Day show–a scenario that led to the axing of the entire marketing department last year– the city will actually do two celebrations, and will also do another big fireworks show for the Teller County Fair. So instead of just one show, area residents can reap the benefits of three.

In addition, the city will make some other adjustments in their events schedule, but nothing dramatic. In fact, the town will host regular live music entertainment in their Pocket Park every Saturday from May 30 to Sept. 5.

These are some of the highlights of the town’s new events schedule, unveiled last week by new marketing director Jeff Mosher.

The marketing chief told the council that the city’s gala July 4th fireworks show will occur on the actual July 4 day. “We are going to be doing our fireworks show on July 4th,” said Mosher. That was sweet music for the ears of the entire council, as the timing of this display has become an Achilles wound for city leaders. Due to a snafu that led to the firing of a veteran marketing chief and his prime assistant last summer, the 2019 show didn’t occur as scheduled for the actual evening of July 4, despite promotions indicating the display would occur then.  As a result, city leaders were flooded with complaints.

But any pending controversies this year were avoided partially due to a more friendly calendar for July 4th celebrations. July 4 falls on a Saturday, eliminating any possible debates.

In the past, the city toyed with the idea of having the show on the weekend regardless of when the actual July 4th holiday occurred to accommodate the casinos and to have a larger audience. That became a no-no for locals and many operators of non-gaming businesses. They contended this clashed with the traditional importance of this patriotic holiday.

And to add to the July 4 excitement, the city will also have a fireworks celebration on July 3, at the request of the Triple Crown Casinos. That will tie in with a live music gala the casinos are planning. The July 3 show will be funded by Triple Crown and won’t be quite as grandiose as the July 4 celebration, according to Mosher.

“We feel that having shows on Friday and Saturday (July 3 and July 4)will be a benefit to the city,” said Mosher, who cited this as a good opportunity for Cripple Creek.

In addition, the city is planning on doing a big  fireworks show for the Teller County Fair.

Mosher cited significant price breaks, if the city does these many shows.

The city council gave the thumbs-up to the plan, along with the entire events schedule. One new addition to the schedule includes live entertainment at the city’s pocket park, next to city hall, every Saturday from May 30 to Sept. 5. This addition is part of a plan to entice visitors and show that the town offers more than just gaming.

Many of the gala celebrations will still occur, with few changes.

The event schedule kicks into full gear soon with the Ice Festival, scheduled from Feb. 8 to Feb. 16. That has become one of the prime winter festivals in the state.

Another added event this year is the Rocky Mountain Rambler 500.  This is a running race, to be held around Mt. Pisgah, that will be a part of the town’s annual fall festival. Mosher, who has specialized in doing sports-related competitions, said this is designed to replace the old Mine to Mine running event that often brought a different demographic to the gaming community. It eventually was cut due to funding cutbacks.

The council expressed much enthusiasm toward the schedule, which lists close to 50 events.

However, some of this same enthusiasm was not shared by one of the long-standing nonprofits, the Two Mile High Club, the sponsors of Donkey Derby Days and the group that cares for the town’s popular herd of donkeys.

Under its new approach, Mosher is trying to avoid having the city do the brunt of the work for every local event and shift some of the responsibilities over to the nonprofit sponsors. With this plan, the Two Mile High Club will have to shoulder a lot more responsibilities in handling the Donkey Derby festival in 2020, such as in dealing with vendors and doing event planning.

This has raised some concerns among key leaders of the club, who hinted that the festival may not be  able to continue under this approach.

In a letter to the city, Club President Curt Sorensen said, “Given our current volunteer pool, our daily duties with the herd, and our inexperience with major event planning, we are still willing to try these assignments for the 2020 event.

“We will review the ability to continue the event for 2021, based on our understanding of an event ownership position for the future. Our mission is the care of the donkeys and how we best secure support in the way of successful fundraising. The club is in the same position as the city. We have to make decisions based on the availability of staff (volunteers) and the ability to manage all the duties required for this event.”

At last week’s council meeting, Ellen Moore, a board member of the Two Mile High Club, echoed similar sentiments and told the council that daily care of the donkeys is a hefty challenge. “Volunteers are in demand,” she added, in noting that the club has limited resources in taking on more responsibilities for Donkey Derby Days. Moreover, she stressed the role the herd plays in attracting visitors. “Everybody loves the donkeys,” said Moore.

She also noted that next year will mark the 90th anniversary of Donkey Derby Days.

Several council members, including Meghan Rozell, offered to assist the club in any way they could. The staff, including City Administrator Mark Campbell, also indicated they would help out.