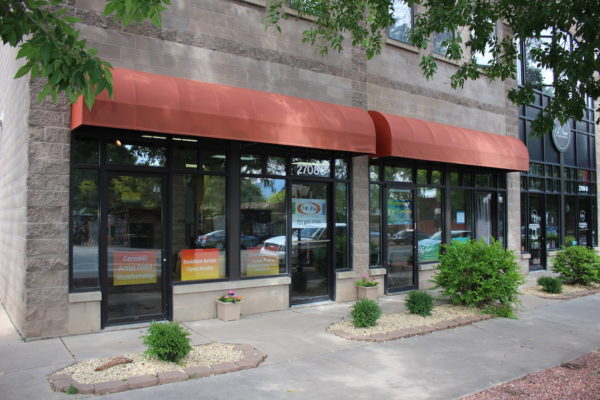 Take a love of art, throw in a desire to see people succeed and add a small dash of a flair for teaching and you have the recipe for success that is Pike Peak Artists Collective at 2708 W. Colorado Ave. just a block off the Old Colorado City Historic District, operated by Rebecca and Casey Baum.

The Baums, who moved here from Lancaster, Penn. in 2017, fell in love with the area,

which they consider progressive, cool, outdoorsy and relatively affordable. They purchased the business, which was previously known as Studio 101 in the 2600 block of W. Colorado Ave. in February and moved it to its current location after renovating the space.

The name came about because of their goal of creating a collective space for the community and the location on Colorado Avenue with a view out the front window of the summit of Pikes Peak. The building is a recent addition to the block, having been built in the 1990s.

“My goal was to create a comfortable space to create,” Rebecca Baum said. “Originally this was a wedding planning space, which is why it was ideal for our needs. It didn’t have that industrial or warehouse feel like the other location did.”

Partnering with local artist Erin Gillespie, who teaches workshops and classes, has been a huge asset for them, as well, Rebecca stated.

The main focus of the collective is educating children about the arts, but the Baums also offer art workshops and instruction to adults. They have found recent success in making their presence known during the first Friday Art Walks, which are a big 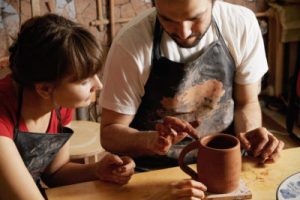 component of art-related businesses in Manitou Springs, Old Colorado City and Downtown Colorado Springs from April to December. During the December Art Walk, they hosted a holiday show and sale, featuring a variety of mediums, including paintings, drawings, pastels, ceramics and wood burnings, all made by members and participants.

The new location features three main areas: a main class area for children, an adult space at the back of the studio that features a large community table and a large sitting area with a fireplace and rock walls at the front of the space, which looks out on Colorado Avenue. There is also a kitchen and a kiln for firing clay after it has been formed on the wheels that are located in the studio space behind the fireplace.       “We have added an adult component to the program,” Rebecca said, “which has been tremendous for us. It allows for more community involvement. It is also a fun space for children.”

The Collective recently hosted an art show for children, where they were able to price their own works and sell them. The art is currently exhibited on one wall of the 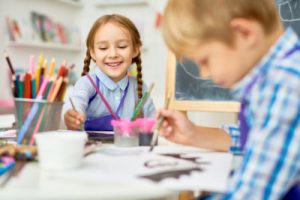 studio, allowing the children to take ownership of their work. On the wall near the fireplace are other works created by students or volunteer teachers and there are many items for sale. On the wall of the space near the clay tables are the works of Gillespie.

“Our overall goal is to develop awareness of art without that summer camp feel,” Rebecca said. “It is all about teaching art in small group settings. We are all about the creative aspect here.”

She added that the location helps cut down on a lot of the traffic the other galleries typically receive, because they are more workshop focused than gallery focused. It also provides a chance for children to learn plein air painting at a nearby park during the summer and take a stroll through the historic district during First Friday Art Walks.      The original name of the facility, Studio 101, came from the original owner’s address and Baum changed it because she felt it had sort of a college feel, which she was trying to avoid. “I chose the name because we are a collective group of artists and that requires a community,” Rebecca said. “Overall, we bring people together to help them flourish in the arts and develop creative expression.”

Since opening, they have received a good response from local art teachers, who have been excited to help teach a class, run a workshop, or host an event. They have taught everything from wood burning, to drawing and mixed media, she stated.       “Having different teachers makes it nice,” she said. “It is a really nice space and works really well. It offers flexibility and a space for art shows. I like the boutique aspect of the space. We have really great teachers who I have been fortunate to work with since opening this space. It is a lot of fun.”

The Collective offers children’s memberships that include pre-kindergarten classes, home school programs, after-school programs and evening classes. Classes run for 90 minutes once a week for $100 a month. Workshops are limited to around 16 to keep them small and allow participants free reign after they have learned basic techniques 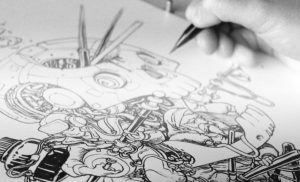 of fine art. There are also memberships available for adults, which include clay lessons, First Friday clay nights and a variety of workshops throughout the year.       The collective also offers gallery space to all artists at the collective and the facility sponsors at least one annual holiday art show and one end-of-the-school year art show for children.

Baum has a degree in art from the University of Oregon and teaches clay and ceramics, with a speciality in glaze chemistry.

Before moving to Colorado she helped manage a ceramic studio in Pennsylvania. That experience and her training helped prepare her for her current role, stating that teaching children art is the best reward.       Baum has received help getting her business up and running from the Old Colorado City Merchants Association, which helped with marketing, promotion, photographs and a Facebook presence, as well as local media outlets.

For information on registering for a class, contact the Pikes Peak Artist Collective at ​(717) 875-5200, ior visit pikespeakartist.com. The collective will host an exhibit based on the works of Vincent Van Gogh every Friday throughout the month of January.