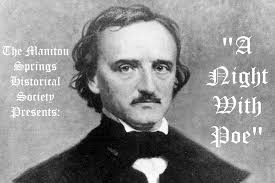 Hosted by the Manitou Springs Historical Society, the event is designed to allow visitors the opportunity to tour the 14,000 square foot 1895 mansion under the cloak

of darkness with drinks, great food and a performance of a Poe classic.      The evening will begin with the dramatic reading of “The Raven” in the castle’s parlour. The mood is set with the original stone fireplace, maroon archway and gold ceiling.       Guests will then mingle and explore the many rooms and halls lit by oil lamps, like they would have been when the castle was built. The beautiful, mysterious and fantastical art of Manitou Springs artist, the late Charles Rockey is displayed in the Great Room, where guests can enjoy period-themed heavy appetizers and desserts made by and whet their appetites with a selection of beer, wine or the signature blackberry-mint “Raven” cocktail, a favorite of Poe himself. The castle’s permanent residents might even make an appearance, as the site is said to be haunted.

Seatings are at 6 p.m. and 8 p.m. on Friday, Jan. 17 and Saturday, Jan. 18. Space is limited, so reservations are required by calling 685-1011. Those registering will receive a personal invitation to the event delivered to their home address and signed by Poe himself. Those attending are requested to dress in all black, Steampunk attire of 1800s Victorian-era clothing to help set the mood. Tickets are $50 per person, which includes two drinks, unlimited appetizers, a tour of the castle and the dramatic reading. 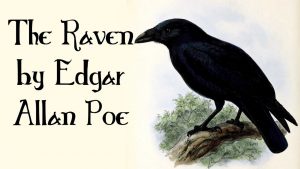 “The Raven,” one of Poe’s most well-known poems because of the phrase quoted by the Raven, “Nevermore.” ​It is a narrative poem first published in January 1845. The poem is often noted for its musicality, stylized language, and supernatural atmosphere. It tells of a talking raven’s mysterious visit to a distraught lover, tracing the man’s slow fall into madness.

Poe was born Jan. 19, 1809 in Boston, Mass. and died Oct. 7, 1849 of mysterious circumstances at a hospital in Baltimore, Maryland. He is often credited with creating the modern mystery story with his “Murders in the Rue Morgue.” Although born in Massachusetts, he considered himself a Virginian. He traveled along the entire eastern seaboard from New York to South Carolina, but never to Colorado.

One biographer said that Poe’s poor luck with gambling and drinking ​might have influenced his constant wanderings, as he often moved to find work or avoid debt, but his constant wanderings had to do with more than money. He actually had a wanderlust and a sense of needing to go to new places and discovering new things. He never really felt at home in Boston and was never really welcomed by residents of Boston, which is another reason he wandered so much during his lifetime.

The feud was partly sparked by comments Poe made about the city. He once noted that its residents “[had] no soul,” asserting that “Bostonians are well-bred — as very dull persons very generally are.” His opinion of its authors—the famous Transcendentalists of the era—was hardly kinder; he called their work flowery and 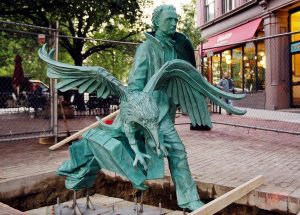 overly moralistic. However, in October 2014, the city erected a statue of Poe with a raven two blocks from the house where he was born (which was  demolished in 1950 to build a parking lot) and in 2009, the city dubbed the intersection “Edgar Allan Poe Square.”

The property on which Miramont Castle is located is part of a parcel of land whose earliest deed dates back to 1862 and was once owned by one of Colorado’s most controversial citizens, Colonel John Chivington, who commanded the infamous Sand Creek Massacre of 1864. The land was sold in 1867. ​

The property on which Miramont Castle is located is part of a parcel of land whose earliest deed dates back to 1862, and was once owned by one of Colorado’s most 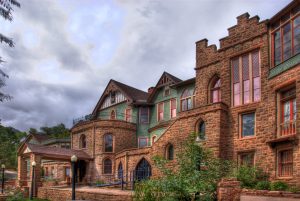 controversial citizens, Colonel John Chivington, who commanded the infamous Sand Creek Massacre of 1864. Records show he sold the land in 1867. The Colorado Springs Company, founded by General William Palmer, is listed on the deeds from 1871 until 1882, when it sold the property to the City of Manitou.

Francolon began construction of the castle in the fall of 1895 and continued through the summer of 1896. At the time it was declared “one of the handsomest and most artistic buildings in Colorado.” Construction of the east section began in 1897. Francolon had collected architectural ideas from his early years of travelling the world with his diplomat father, who served as his own architect. The Gillis brothers, Angus and Archie, were contractors of the Castle, and according to a daughter of Angus Gillis, Fr. Francolon sat at a table in the Gillis home for countless hours while his plans were described in detail for the builders.

William Frizzell, like the Gillis brothers, came from Nova Scotia, and was a versatile entrepreneur. He and his sons had cleared land for horses, built roads, and constructed the stone arch bridges over Ruxton and Fountain Creeks. They quarried and hand cut the native green sandstone for Miramont’s two-foot thick walls.

Miramont, which means “look at the mountain,” had indoor plumbing and electricity when it was built, as electricity had been available in the late 1880s when Angus Gillis built El Paso County’s first electric generator in Manitou for Dr. Isaac Bell.      With Francolon incorporating all the features he liked into the Castle, a remarkable structure with nine separate styles of architecture emerged. From the medieval, crenelated battlements at each end of the Castle, to the beautiful Gothic front door, Miramont stands as a tribute to one man’s dream. Shingle-style Queen Anne, Romanesque, English Tudor, Flemish stepped gables, domestic Elizabethan, Venetian Ogee, Byzantine, Moorish, and half-timber Chateau are used randomly throughout the four stories. For example, the Grand Staircase has two sets of windows, each in a different architectural style.      With the building stair-stepping up the mountain, the front door is on the first level and the back door is on the fourth. All floors had at least one exit to level ground. Miramont is over 14,000 square feet, has over 40 rooms, including eight-sided rooms, a sixteen-sided room, a solarium which was once a conservatory greenhouse, arched doors and windows, with rarely a room with four square corners.

At the time the Francolons lived here, there was an underground tunnel leading from Montcalme Sanitarium through which the Sisters of Mercy delivered meals, and potentially there were other tunnels and escape routes, as well as hidden compartments within fireplaces. This was an era of great unrest and revolution in France, from which the Francolons emigrated, and it is believed that he built his Colorado home with this in mind.