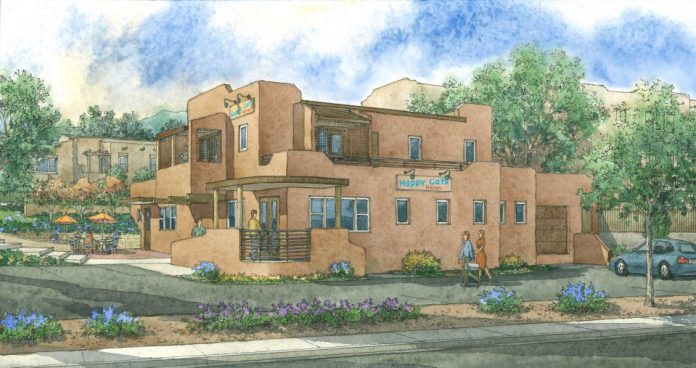 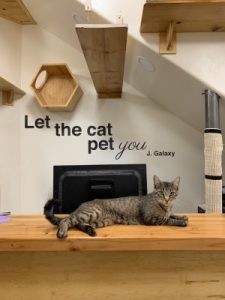 Entering the front door of Manitou Springs’ Happy Cats Haven is like entering a kingdom for stray felines. The greeting above the counter sets the tone: “Let the cat pet you.  That’s where you start.” The quote by Jackson Galaxy is also the theme used by volunteers and the director, according to Sara Ferguson, a resident of Manitou Springs.

The building, which covers approximately 5,000 square feet, houses cats who have been abandoned or surrendered and are waiting to find their permanent home. But they will soon find shelter inside a  local coffee shop, where people can get some coffee and enjoy the company of senior cats residing at the facility. It was an idea that originated in Japan, where houses are too small for pets, so people can enjoy the company of cats while enjoying coffee, Ferguson said.

“Cats live long lives,” Ferguson said. “We want to be here for all of their nine lives. We get some returns for various reasons, but our ultimate goal is to find homes.”

Happy Cats Haven, originally located in a storefront at a strip mall on the west side of Colorado Springs, on 21st Street near Patsy’s Candies, was founded in 2013, when people discovered a hoarding situation involving cats. A group of volunteers got together to take a look at how cats were being treated and the statistics were not good, Ferguson said. 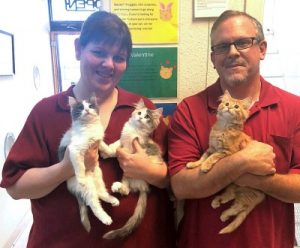 “We faced situations where cats were traumatized and we needed to find ways to make them more adoptable,” Ferguson said. “There are four such facilities in the region and we adopt approximately 1/12th of the total number of cats in the area. We provide a habitat that allows them to behave like cats.”

At Happy Cats Haven, cats are given the freedom to run, play, interact with other cats and develop their personality. It also gives people interested in adopting a cat the chance to discover

the personality of the cat prior to making a decision, something not easily done when cats are housed in cages or pens, Ferguson said. “We work really hard to match people with cats, because we don’t want them to come back,” she said.

The committee began searching for a place in 2018 that would allow them to be more sustainable. They decided on the spot where they are currently located, 327 Manitou Ave., the former location of Mushroom Monday’s (The Manitou Springs gift shop) manufacturing facility, which had been empty for a while. Prior to that, the facility was an indoor amusement facility.

The building was constructed out of 75 percent recycled materials and contains two apartments that can be rented to help At Happy Cats Haven become more sustainable and help with operating costs. “The lower costs will help us help more cats,” Ferguson said. “That will help take us into the future. The ideal environment allows for about 10 square feet of space per cat.”

The committee created a GoFundMe page and applied for a grant to help them get the funds to complete the construction project. They then set to work on building their volunteer and donor base. They broke ground in 2017 and set completion by June 2019. After a few setbacks, including theft of their water heaters, the facility finally opened by July.

“The overall goal was sustainability,” Ferguson said. “The facility allows cats the freedom of movement and choices. We work hard to help the cat population in the area.” The facility follows a trap, neuter, return philosophy and meets cats where they live. Some are owner surrendered, some are dropped of pregnant and some are brought in by veterinarians. Ferguson said they fixed over 900 cats in 2018 alone.

“The layout of the facility helps cats explore and allows volunteers to have a better experience when they deal with the cats,” Ferguson said. “We are happy to be in Manitou Springs. It was the right place at the right time.”

Adoption fees range from $60 to $150 and all cats are spayed or neutered and range in age from kittens to more senior aged cats….https://happycatshaven.org